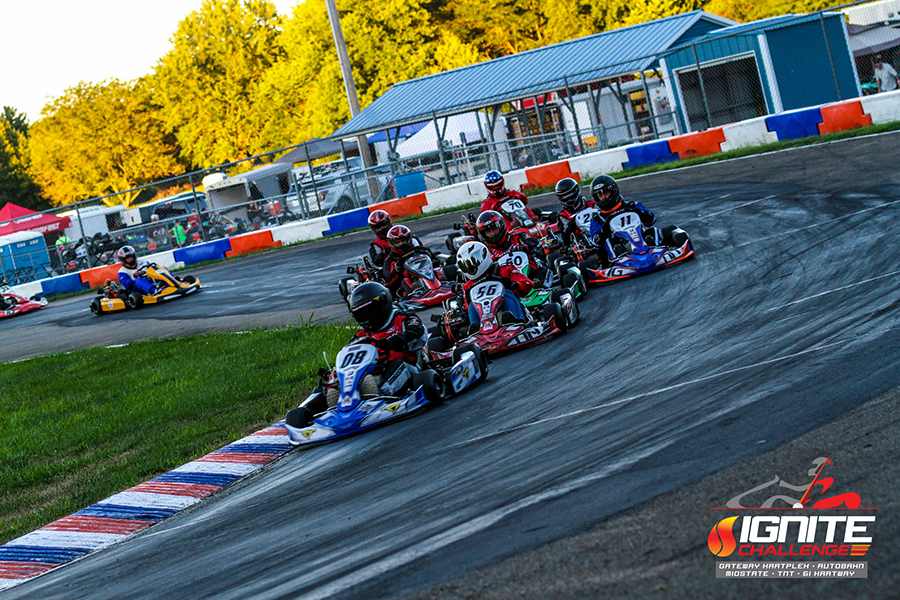 Saturday, July 29 was the second race of the inaugural Ignite Challenge Series on Mid-State Kart Club’s backwards configuration. The changing track conditions throughout the night along with the mix of track surfaces led to phenomenal racing across every class. Margay Racing wants to thank Mid-State Kart Club’s track president, Jon Clem, and their amazing volunteers for all their work and support of the Ignite program.

This is the inaugural year for Margay’s Ignite Challenge Series, a 5-race summer series that visit’s all of Margay’s Ignite Series tracks. The goal of the series is to give the drivers an opportunity to affordably travel and compete at a new track without the extensive costs usually tied into a regional or national program along with utilizing the same rulebook across each track. 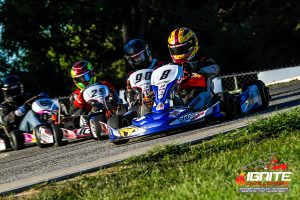 Ignite Senior was the thriller of the night. Starting on the pole was Missouri’s Ken Williams, with the top seven being separated by two tenths. In the pre-final, Sean Kennedy would take the lead into turn one over Williams. After holding the lead for 5 laps, Jonathan Strohm would find the better run heading down the backstretch and take the top spot through turn two. Strohm would take the pre-final win, gridding him on the pole for the night’s final. On the start of the final it was a quick four kart breakaway. Strohm would hold the lead until lap 10 when Ken Williams made an inside move down the backstretch. Under the white flag, Strohm passed Williams back on the inside heading into turn one, holding it two-wide onto the backstretch. “Pistol” Pete Vetter had a run and forced it 3-wide on the inside heading into turn two. With all three karts funneling high out of turn two, Sean Kennedy would make the inside pass heading into the turn 3 “House Corner”. Kennedy’s lead would be short lived as Pete Vetter made an outside pass through turn 6 and never looked back. Vetter would take the win over Kennedy and Williams by just a tenth of a second. After round two, Eric Loddeke maintains his points lead over Matt Chubb.

Ignite Junior was a back-and-forth battle between Evan Stamer and Hunter Richardson. Richadson, starting on pole in the pre-final would get edged out on the first lap by Stamer. Richardson would stay right on his tail making the move for the lead on the final lap setting him up for a first-place starting position in the final. Stamer would have another great start and take the lead into the first lap of the final. The three-kart train of Stamer, Richardson and Jensen Benet would pull away from the pack and maintain those positions to the finish. Richardson would take a few looks on the inside heading down the backstretch but Stamer would hold on for the win. That victory gave Stamer the points lead with Jenson Benet moving up to second. 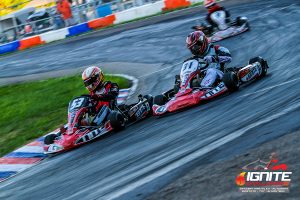 Ignite Masters saw a changing of guards as Brandin Moore would dominate the night as Rod Scharf struggled to find a balance on the low-grip track. Jim Miller would grab the second position in the final after both Mike Lebrun and Rod Scharf would spin after a hard battle for a podium position. Greg Mefford would take advantage of the incident and grab the third spot. Moore’s win allowed him to jump to first place in the points standings with Rod Scharf close behind.

In Ignite Rookie, Jaiden Beckman would take the win and expand her points lead heading into Gateway. Her younger brother, Race Beckman, would also go two-for-two in the series in Ignite Kid Kart, expanding his lead over second place Lane Mayer.

The next round of the Ignite Challenge Series will be on Gateway Kartplex’s SuperTrack on Saturday, September 16.

For more information on the Ignite Challenge series, visit http://www.margay.com/race-with-us/ignite-challenge.html