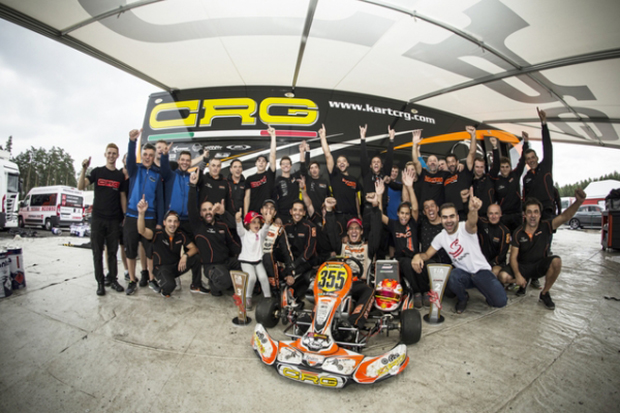 CRG drivers ended on a high the sixth and closing round of the European Champions that took place in Kristianstad. In KZ, Paolo De Conto was on the podium again. Sasse third in OK-Junior, Di Mauro second in KZ2 and Dennis Hauger great fourth in OK.

Some rain made the final stages of the European Championship even trickier in Sweden, as all categories – namely, KZ, KZ2, OK and OK-Junior, have been battling out the CIK-FIA Continental title. CRG colors eventually obtained very satisfying results.

Paolo De Conto has honoured at best the KZ title mathematically won in Le Mans on CRG-Tm. The Italian driver of CRG secured his second European Championship title after taking the KZ World Championship in Kristianstad in 2016. In Sweden, Paolo De Conto kicked off the weekend with a very last minute problem making him skip qualifying. In the heats he recovered well anyway, installing himself in a briliant fourth place. This has not been the first time during the season that De Conto had to start the Final from the second row of the grid. In fact that happened already in the first two rounds held in Sarno and Genk, where he managed to take the win anyway. In Kristianstad, a recovery was not that easy due also to the wet tarmac, but Paolo De Conto has put in a strong Final anyway, taking a third place in this occasion. Alongside the full haul in Sarno, Genk and Le Mans, the third place taken in Kristianstad confirmed CRG and Paolo De Conto as KZ European Champions in 2017.

Paolo De Conto’s comment at the end of the Final in Kristianstad: “I am very happy with this race because I came here with the title, just to drive without taking penalties which could have compromised the end result. I am happy because I drove on the wet and now we know we need to find something to be quicker. I want to congratulate with my rivals because I run an amazing race without errors but I did not have the speed to win. So congratulations to them and see you in Germany at Wackersdorf for the World Championship”.

In KZ, the two Pex brothers, that have been protagonist of the German DKM Championship in this season, have not been as competitive in Kristianstad: Jorrit Pex was fifth, while his brother Stan Pex had to retire 9 laps into the race.

The KZ Final was won by Patrik Hajek. Paolo De Conto (CRG-Tm) is the Championship winner.

OK-JUNIOR. In the OK-Junior Final, which was run on wet tarmac but without rain falling, the German of CRG TB Racing Team Hugo Sasse confirmed to be the most competitive of CRG drivers during this weekend in Sweden, ending right at the feet of the podium, a result that was later on converted into a P3 due to the penalty handed to Edgar. Sasse, after posting the best absolute time in qualifying and taking the fourth position after heats (a victory and two second places), ended the Final in fourth place, but was later on promoted to third, while the Dutch driver Kas Haverkort of CRG Keijzer Racing followed him. The Brazilian of CRG Gabriel Bortoleto was among the main protagonists of the heats and he managed to install himself in P12 early on in the Final, but then had to concede some positions to end his race in 16th place. Eventually, he was handed a 10s time penalty that relegated him to P20. The Spanish driver Francisco Sagrera was 15th, while Luca Giardelli did not manage to qualify for the Final despite a positive 10th place in the closing qualifying heat, as happened to Donar Munding, Mathias Torreggiani and Davids Trefilovs of SRP Racing Team.

The OK-Junior Final was won by Jack Doohan, while the Championship was won by the British driver Jonny Edgar, who was fourth following a 10s time penalty.

KZ2. The Swedish driver of CRG Holland Benjamin Tornqvist had been the quickest of the CRG lot ahead of the KZ2 Final, but he lost 15 positions at the start. The Brazilian Gaetano Di Mauro, managed to recover a lot of positions at the getaway on CRG-Tm instead. He had been previously protagonist of the qualifying stages on the humid tarmac, recovering up to P2 from the starting P14 thanks to some very effective driving. Max Tubben of CRG Holland has also been among the quickest of the Final putting in a stunning recovery from P30, as the Spanish Gerard Cebrian Ariza who started 22nd. At the flag, Gaetano Di Mauro claimed an excellent P2, taking the third podium for CRG in Kristianstad. The young Max Tubben took a very good fourth place. Benjamin Tornqvist eventually recovered up to P11, but was later on relegated to P13 by a penalty. Gerard Cebrian Ariza was 17th. The other Spanish driver of CRG Enrico Prosperi was out of the Final by a whisker, as happened to the Finn Petteri Ruotsalainen and Alessandro Giardelli, the latter despite a good qualifying.

The KZ2 Final was won by Adrien Renaudin, while the Championship went the German Leon Kohler’s ways, who was 12th in the Final.

The closing OK Final was run on a nearly dry circuit and the young Norwegian of CRG Dennis Hauger has been stunning since the start, one of the strongest protagonists despite being in his maiden year following last year’s OK-Junior campaign. Hauger has joined the battle for the lead, taking also P1 for a while, but eventually he slipped down to third until when 7 laps were left to go, when he was overtaken by Travisanutto and closed his effort in P4.

The British 2016 Academy Champion of CRG  Callum Bradshaw was sixth recovering some solid 9 positions posting also the fastest lap of the race. CRG Keijzer Racing’s Glenn Van Berlo was 12th leading the German Hannes Janker. The Spanish driver Kilian Meyer ended 20th at the end of a good recovery from the back of the starting grid.

The OK Final was won by Finlay Kenneally, while the Championship went to Sami Taoufik, who was fifth at the flag.