Birel ART on the European Sweden Podium in KZ 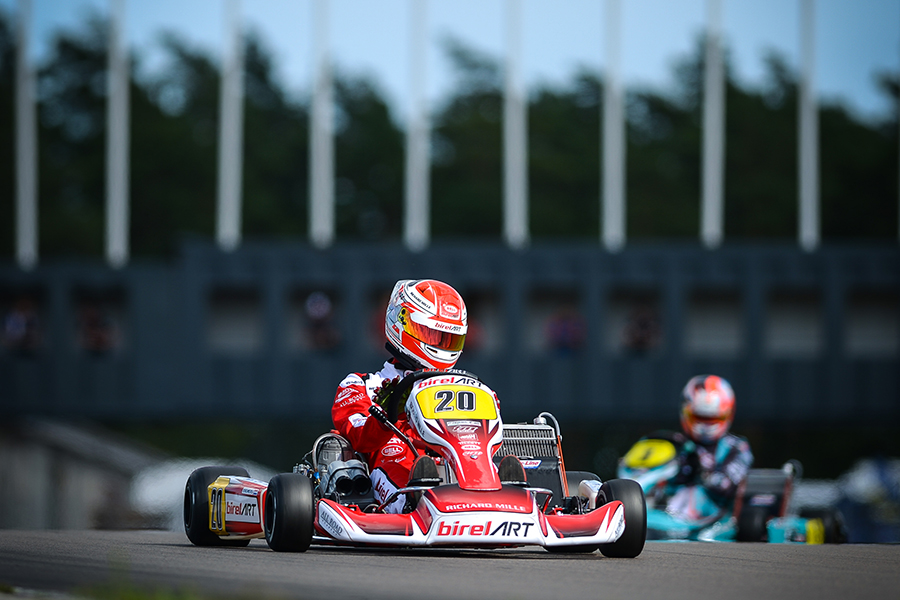 At the last meeting of the 2017 CIK-FIA European Championships, the drivers of the Birel ART Racing team were able to achieve first-rate performances. Although success in the Finals was not always possible in the showers on Sunday at the Kristianstad circuit, the Italian brand had the satisfaction of showing the potential of its chassis, powered by TM Racing, and finished on the podium of the European KZ Championship thanks to Marijn Kremers.

The young Dutchman had started strongly on pole position, then retaining the lead of the elite category in the Qualifying Heats. Unfortunately, Kremers missed out at the start of the Final, doubtless intimidated by the stakes, but it must be said that the track had been made slippery by the rain. Marijn made the most of his equipment to stay on the pace, but could not reach his opponents who had taken a comfortable lead from the start. However, he finished 4th in the race and won an excellent 3rd position in the final ranking of the European Championship.

In KZ2, the excellent TM Racing engines prepared by Bruno Daldosso allowed the Swede Alexander Dahlberg and the Italian Riccardo Longhi to show very well at the start of the weekend. Dahlberg posted the 4th fastest lap in Qualifying only 72 thousandths from pole and kept his place at the end of the Qualifying Heats. In the heats, Longhi climbed from 10th to 2nd position, winning two races, twice setting the fastest lap in the race. The Final on slick tyres on a very wet track created some confusion among the participants. Longhi, Filippo Berto and Abdullah Al Rawahi did not finish and only Dahlberg crossed the finish line in 5th place with the grace of a tightrope walker. A penalty for an incorrectly positioned spoiler then demoted him three places.

Caio Collet as usual delivered beautiful battles in the top 10 of the European competition in the OK category. While the rain tyres were used on the drying track of the Final, the young Brazilian rookie finished in a very honourable 10th position under the chequered flag, before being ranked 15th because of one of the many penalties distributed for incorrectly positioned spoilers. Following a difficult Qualifying, rookies Michael D’Orlando and Manaf Hijjawi were not able to qualify for the Final on the difficult track of the Åsum Ring.

The youngster Sebastian Montoya, who was in good form in the OK-Junior category, didn’t qualify for the Final after receiving a spoiler penalty in his first heat. His Spanish team-mate Jose Antonio Gomez Gutierrez, also an international rookie, followed the same path.

Birel ART would also like to congratulate Craig Tanic, who has just been crowned the French Champion in the Cadet category at the Saint-Amand circuit at the wheel of a Birel ART / Rotax with the MGT team.

After a tight competition, Birel ART Racing will take advantage of the summer break to develop the equipment in the light of recent lessons in order to prepare for its return to world level in September.