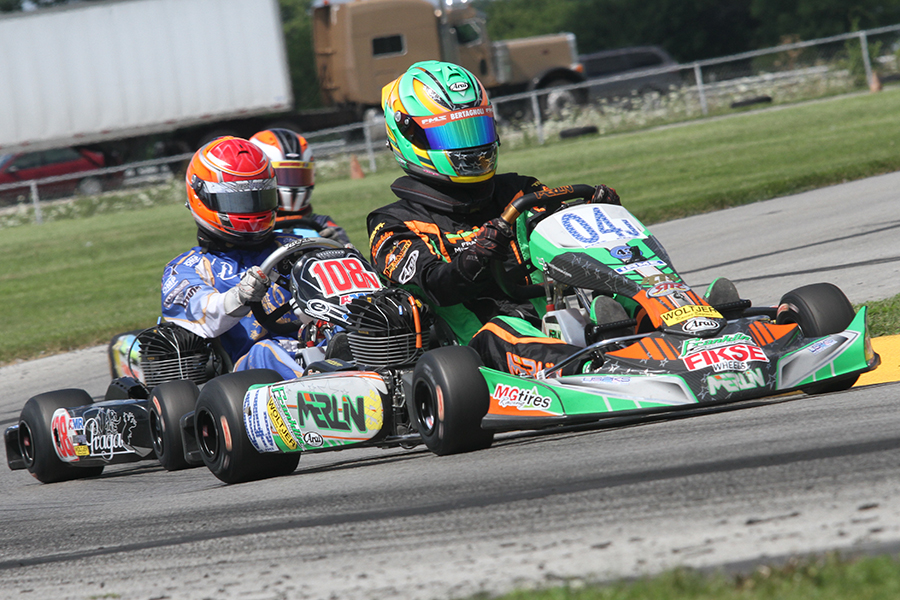 Alex Bertagnoli landed his third victory in KA100 to tighten up the championship chase (Photo: EKN)

The final day of the Hoosier State Grand Prix completed at New Castle Motorsports Park on Sunday for the United States Pro Kart Series – presented by Fikse Wheels and MG Tires. Another perfect day of weather greeted the 150 entries competing in the seven categories around the 1-mile New Castle, Indiana facility. Three tickets to the IAME International Final in Le Mans, France were awarded following the day’s action with the championship leaders in the top three IAME divisions. 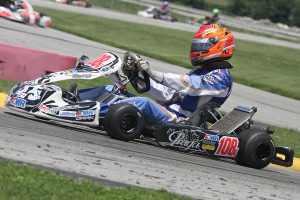 Brandon Jarsocrak locked up the IAME International Final ticket with his fourth win on the year (Photo: EKN)

Saturday winner and championship leader Brandon Jarsocrak (KSNA / Praga) completed a sweep in the Franklin Kart IAME Pro division. Jarsocrak edged out Eduardo Barrichello (OGP / Tony Kart) – son of Formula One / IndyCar driver Rubens Barrichello – by 35 thousandths of a second. Barrichello was pushed back in the Prefinal with Alex Bertagnoli (Franklin / Merlin) as the lead challenger, showing the way briefly until Jarsocrak secured the race win. The Final was a repeat of Saturday with Jarsocrak and Bertagnoli joined by Jake Craig (RPM / Tony Kart). Bertagnoli jumped out to the lead with Craig slipping into second to drop Jarsocrak to third. Jarsocrak moved back into second after lap five, and the top trio ran static for the majority of the race. With five laps to go, Jarsocrak closed up on Bertagnoli, taking the lead. From there, the point leader maintained the lead, reaching the checkered flag first for his fourth victory on the season. Jarsocrak also claimed the ticket to the IAME International Final. Bertagnoli settled for second with Craig running third. Armin Cavkusic (Franklin / Merlin) was the quickest driver midway, working his way up from 12th. Into fourth, Sonny Cervelli (RPM / Tony Kart) was able to slip past for fourth at the line. Cavkusic was penalized for a bumper infraction, dropping him down to seventh in the order with EKN TaG Driver Rankings #1 driver Ryan Norberg (PSL / Birel ART) moving up to fifth. 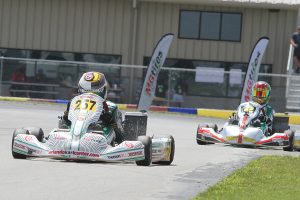 Tyler Gonzalez outran the IAME Junior field for his second victory of the year (Photo: EKN)

The best racing throughout the weekend was in the Switch Racing Engines KA100 division. A number of drivers were in contention, including top qualifier Mike McAndrews (Fullerton) and Saturday winner Alex Bertagnoli (Franklin / Merlin), who won the Prefinal. The two helped to make up the lead group, including Brandon Jarsocrak (KSNA / Praga). Jarsocrak led early on with Bertagnoli taking his turn at the point. McAndrews was racy, and went from third to first quickly to trigger the shuffling for the win. This allowed TJ Koyen (Innovative / Exprit) to close in to make it a four driver battle. Jarsocrak led as they took the white flag lap with McAndrews in second. Heading into the I-70 corner, Jarsocrak drifted toward the inside while McAndrews tried a slingshot. The contact sent McAndrews into the grass, and slowed Jarsocrak’s pace. This gave Bertagnoli the opportunity to strike, slipping past for the lead and the victory to double up on the weekend. Jarsocrak held on for second, off by four hundredths of a second. Koyen came across in third ahead of McAndrews while Colton Ramsey (Franklin / Merlin) ended up fifth. 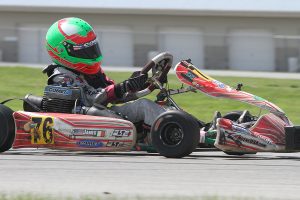 It looked to be a repeat of Saturday in the Woltjer Racing Engines IAME Junior class with Dylan Tavella (IRM / Tony Kart) at the front. Tyler Maxson (SRC / Tony Kart) was his lead challenger, coming 96 thousandths short in qualifying and 98 thousandths behind at the end of the Prefinal. It ended up being Tyler Gonzalez (SRC / Tony Kart) who would be the driver to beat in the Final. Tavella led the first opening laps with Gonzalez moving into the lead on lap five. From there, Gonzalez never put a wheel wrong, and kept Tavella at a large enough gap to not challenge for the lead. It was the second victory of the season for Gonzalez, with Tavella earning the fastest lap of the race. Maxson won an epic battle for third ahead of Jeremy Fairbairn (SCR / Tony Kart) with Zachary Hollingshead (OGP / Tony Kart) completing the top-five. The seventh place finish by Maks Kowalski (Franklin / Merlin) kept him at the top of the championship standings, earning him the IAME International Final ticket to Le Mans in October.

The L&T Clutches Yamaha Junior race was a duel between point leader James Lynch (Tony Kart) and Saturday winner Matthew Mockabee (Tony Kart). Mockabee led all but the final lap in the 20-lap Final, with Lynch edging out for the victory by 59 thousandths of a second. Austin Morris (FA Kart) completed the top-three. 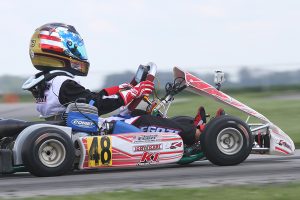 Reece Gold (Benik) began the day in the Allison Racing Engines Mini Swift category as the top qualifier. After losing the lead to Anderson Leonard (Energy) to begin the Prefinal, Gold took back the top spot before coming under heat from Nicholas Terlecki (Franklin / Merlin). The Saturday winner drove to the race win, putting him on the pole position for the main event. The quickest driver on the track however was James Egozi (Koene / Tony Kart), who finished 15th. Gold took over the top point at the beginning of the Final with Terlecki slipping back. Jeremy Fletcher (OGP / Tony Kart) became the lead challenger after the halfway point. Lap 14, Fletcher took over the lead from Gold, but at the same time, Egozi had made his way up to the third position, closing in on the top two. Gold settled in on Fletcher’s bumper, waiting for the final run to the checkered. Egozi, with fast laps of the race, continued to close in on the lead duo, and was right there on the final circuit. First, Egozi slipped past Gold early on in the lap. And then at the green corner, Egozi moved to the lead ahead of Fletcher. Coming to the checkered flag, Fletcher made his move on Egozi to drag race with Gold also spanning out to make it three wide.  Egozi got a great drive off the final corner, and held on by three thousandths of a second to score his first series victory. Fletcher crossed the line in second with Gold in third, all within 22 thousandths of a second. Santiago Trisini (Benik) ended up a close fourth, earning the third IAME International Final ticket on the day. Terlecki ended the day in fifth. 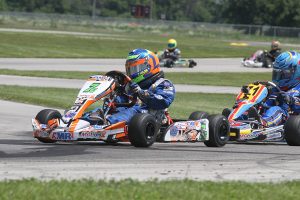 Christian Miles (KSNA / OK1) was won of the quickest drivers all weekend in the Merlin Kart Yamaha Cadet division. Miles earned fast time in qualifying but ended up third in the Prefinal behind Sam Hinds (FA Kart) and Annie Rhule (Energy). The trio pulled away from the field in the Final, with Miles at the point. Hinds waited for the final lap on the exit of the final corner. As they made their way toward the kink out of I-70, Hinds tried to pull up alongside Miles, but the door was shut. This slowed down Hinds pace, not allowing him to challenge at the line. Miles crossed the line first, earning his first victory in the category. Hinds settled for second with Rhule in third. Saturday winner Mateo Rubio-Luengo (Benik) was fourth with Bryson Morris (FA Kart) winning the fight for fifth. 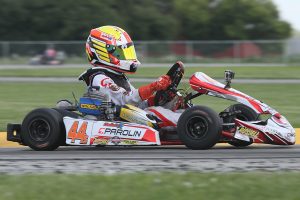 Saturday ended for Caleb Gafrarar earning his stripes with his first flip. At the start of the main event for the Innovative Performance Micro Swift class, Gafrarar tipped over after contact in the opening corner. He quickly popped up and was clear of any injuries, however his kart was not so lucky. A swap to a new Parolin chassis from Russell Karting Specialties, Gafrarar came back Sunday ready to jump back in. Gafrarar was fifth in qualifying with Sebastian Ng (Nitro Kart) setting the pace. Ng continued to show the way in the Prefinal, with Gafrarar working up to the second spot. The two were joined at the front by Frankie Iadevaia (Nitro Kart) with the three running nose to tail. With two laps remaining, Gafrarar pulled the trigger, working past Ng for the lead. The battle allowed Logan Toke (Top Kart) to close in, making it four drivers for the win. Toke got past Iadaevia and then Ng by the white flag. Toke set up Gafrarar for the final run to the checkered flag, and the two drag raced to the line. In what was truly a photo finish, Gafrarar crossed the line ahead of Toke by one thousandths of a second for his first series victory. Iadeavia finished ahead of Ng for third with Mateo Rubio-Luengo (Benik) in fifth.