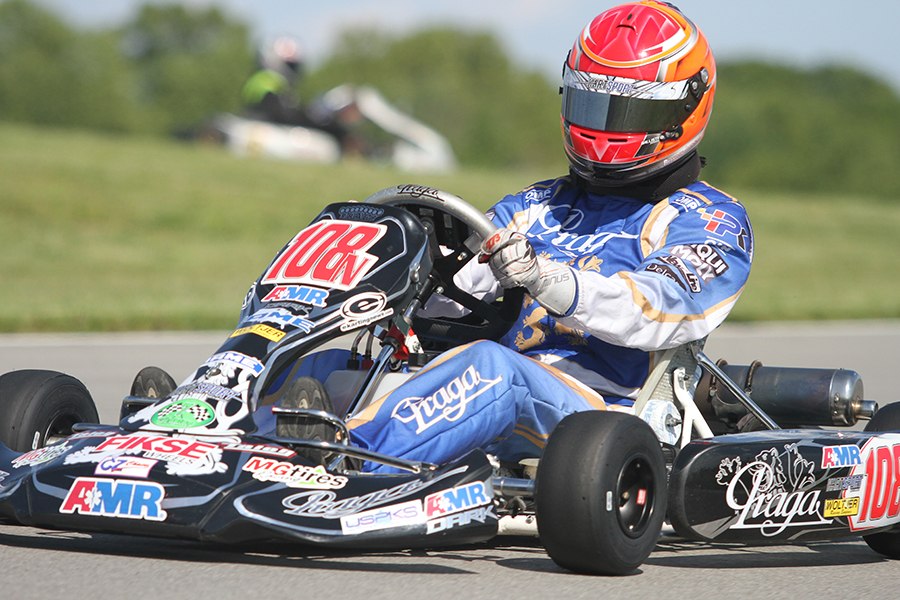 The United States Pro Kart Series – presented by FIKSE Wheels and MG Tires – is set for the third event of the 2017 season. The Hoosier State Grand Prix will take place at the New Castle Motorsports Park over the July 28-30 weekend. Nearly 130 entries have pre-registered for the event in the seven different categories that will contest the 1-mile circuit in New Castle, Indiana. This weekend is very important in three IAME divisions, with tickets to the IAME International Finals in Le Mans, France on the line. Those leading in the overall standings at the end of the weekend for IAME Pro, IAME Junior, and IAME Mini Swift earn a full race program at the October 12-15 event.

Two-time race winner Brandon Jarsocrak (KSNA / Praga) holds the championship lead in the Franklin Motorsports IAME Pro standings. ‘Money’ won at both the GoPro and Pittsburgh events, his first wins since the 2015 season, and holds a 277-point lead over Senior rookie Alex Bertagnoli. The Franklin / Merlin driver is going to need some help in order to challenge Jarsocrak for both the IAME ticket and overall championship as the Round One victor suffered a DQ at Round Three. Round Three winner Jacob Donald (KSNA / FA Kart) took himself out of contention in the championship with a DQ in Round Four. A number of drivers will not be worrying about points, only a chance at victory as they prepare for the upcoming SKUSA Pro Tour SummerNationals. Drivers from California, Texas, and Florida are all making the trek to New Castle, including Eduardo Barrichello – son of Formula One / IndyCar driver Rubens Barrichello. 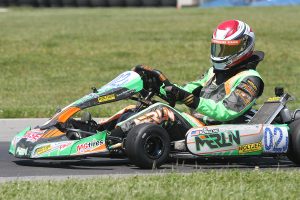 Victory at Round Four puts Maks Kowalski at the point in the IAME Junior title chase (Photo: EKN)

Only 24 points separate the top-two in the Woltjer Racing Engines IAME Junior standings heading into New Castle. Maks Kowalski jumped to the top of the standings following his first series victory, battling the wet conditions in Pittsburgh to rip off four straight podium finishes. Kowalski has yet to finish outside the top two positions in the four main events in 2017. His Franklin / Merlin teammate Austin Schaff won the opening two rounds of the season, and was unable to reach the podium in Pittsburgh, putting him back to second in the championship chase. Like the Senior category, a number of drivers are attending New Castle to prep for next month’s SKUSA event, with the total of pre-entries over the 20-driver mark. The Ocala Gran Prix operation is bringing a host of drivers after making their series debut last month in Pittsburgh.

The calculators will be crunching throughout the weekend as we watch the Allison Racing Engines IAME Mini Swift division. Championship leader Brent Crews won an entry to the IAME International Final last month in Pittsburgh coming out as the weekend winner. Should Crews (Nitro Kart) be leading the overall standings after the New Castle weekend, he will take the full ticket to Le Mans with the overall weekend winner this weekend receiving the ‘entry only’ ticket for October. If Crews is the leader in both scenarios, the second highest point earner from the New Castle weekend will earn the ‘entry only’ spot. Crews holds a 121-point advantage in the overall standings over Santiago Trisini (Benik), who scored two victories at New Castle during the WKA weekend. The class will see its largest field of the season as well, over the 20-driver make for pre-entries. Last year’s series champion Reece Gold (Benik) is making his 2017 debut, and is always a factor at New Castle. 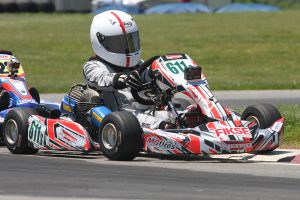 Brent Crews has the ‘Ace in the Hole’ – leading the IAME Mini Swift standings while earning an entry to Le Mans in Pittsburgh (Photo: EKN)

The introduction of the KA100 engine package has been a success, seeing four different drivers claim victory in the four different main events. New Castle is sure to be exciting with all four in attendance and nearly 30 drivers set to do battle. Leading the Switch Racing Engines championship chase is Round Three winner Brandon Jarsocrak. The KSNA / Praga driver has failed to finish outside the top-five all season, and holds a 62-point advantage over Senior rookie Alex Bertagnoli. The inaugural KA100 winner back at Mooresville has two runner-up finishes, with the Franklin / Merlin driver looking to cut into Jarsocrak’s lead. Round Four victor Mike McAndrews gave Fullerton USA its first major victory for the Terry Fullerton chassis brand, and put the former USPKS champion in the title chase. The fourth different winner on the year is Dusty Davis. A former national karting standout, David (VSR / FA Kart) is returning back to New Castle for the first time since breaking his arm practicing at the 2013 RoboPong 200. Close behind in the championship chase is veteran TJ Koyen (Innovative / Exprit), who has stood on the podium many times at New Castle, coming off a runner-up finish in Pittsburgh.

The L&T Clutches Yamaha Junior season has been a two driver battle for the top spot. James Lynch and Colin Neal have swapped the top position throughout the first two events on the year, each taking home two victories. Lynch (Tony Kart) holds the advantage over Neal (Tony Kart) in the title chase, leading by five points. Matthew Mockabee (Tony Kart) joined the duo, placing runner-up in Pittsburgh and is back again at his home track with Austin Morris (FA Kart) set to make his 2017 USPKS debut. 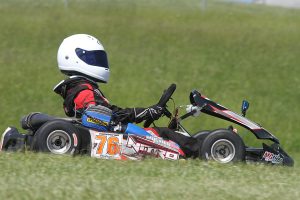 Despite scoring zero victories over the first four rounds in the Merlin Racing Karts Yamaha Cadet class, Mateo Rubio-Luengo (Benik) leads the championship chase. Three straight podium finishes puts Mateo at the top of the standings, holding onto a 126-point lead heading to New Castle. Christian Miles (OK1) sits second, just two points ahead of Annie Rhule (Energy). Neither of the two-time winners Williams Rubosto and Connor Zilisch are not on the entry list.

It is a tight chase in the Innovative Performance IAME Micro Swift with Frankie Iadevaia (Nitro Kart) and Mateo Rubio-Luengo (Benik) in the hunt. Iadevaia has two victories on the season, with Mateo holding three podium finishes. The two are separated by 15 points heading into the third event. Round Two winner Ben Maier (Nitro Kart) is third, needing to make up ground on the top two and repeated his two victories from the WKA weekend would help. Same for Christian Miles (Formula K), who is back of Maier by just three points. Don’t forget Round Three winner Sebastian Ng (Nitro Kart), Caleb Gafrarar (Parolin) and California driver Logan Toke (Top Kart) making the trek out. This weekend’s field will be the largest of the season, boasting 18 drivers.