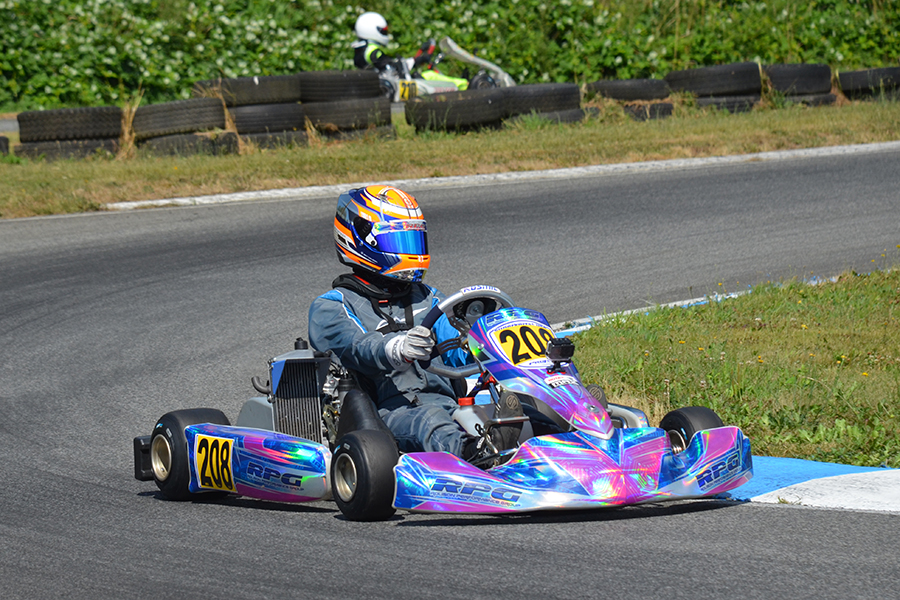 When your chassis set-up is good, there are times when it’s wise to leave things well enough alone and keep the race wins coming.  Despite the fact that the weather improved for Sunday’s Can-Am Karting Challenge events at Greg Moore Raceway in Chilliwack, five drivers had their chassis and engines dialled in to complete weekend sweeps of their respective classes.  Matthew Taskinen (Kosmic) and Hannah Greenemeier (Kosmic) doubled up in the Senior and Junior Max classes, while Kyle Wick (CRG) was again dominant in the Shifter category. Zach Pettinicchi (Tony Kart) scored his second TaG Senior win of the weekend, while Josh Pierson did the same in LO206 Junior. Click HERE for Saturday report.

Mason Buck (Tony Kart) and Walker Hess (Tony Kart) topped the Senior Max qualifying session over Taskinen to begin the day, but the Canadian was on his game in the Prefinal, besting them both by over a second to secure the pole for the Final.  Contact between Kyle Dupell (FA) and Kellen Ritter (Kosmic) on the second lap of the Prefinal sidelined Ritter and set up his stellar charge from the tail of the 17-kart field in the main.  At the start of the 20-lap Final, Taskinen was on his game, jumping to a comfortable lead coming out of the turn one-two complex as his competition waged war for position behind him.  Taskinen was never challenged from there, maintaining a gap of just over a second for the entire race.  Buck entered the weekend with the point lead and his second on Sunday pairs nicely with his fifth from Saturday.  The battle for the title at Pat’s Acres in September is going to be thrilling. Dupell worked his way to third early in the final, as he completed the podium with a consistent run.  Former national level ICA star Tyler Dueck returned to action this weekend after a 10-year hiatus, running with Steve Rickman’s new Atomica program, and he delivered a strong fourth, getting past Kyle Wick (Tony Kart) in the late going.  Ritter’s recovery after his Prefinal DNF was solid, advancing with decisive overtaking to finish sixth, keeping his name in the title fight. 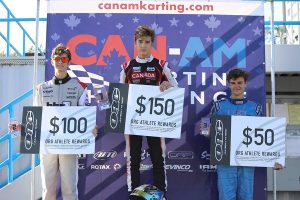 Greenemeier remained dominant in Junior Max action, topping all three sessions to extend her point lead.  The Denver, CO driver was never challenged, but the battle for second was filled with close racing and eventually, an incident that shook up the order.  Jason Leung (Gillard), Kyle Francis (Tony Kart) and Marco Kacic (Tony Kart) were the initial players in the battle for the final positions on the podium.  With Greenemeier having already secured her Team USA ticket to the Rotax Grand Finals at the US Open/Grand Nationals event in New Jersey, the tension was high for the remaining racers with a chance at the national team on the line.  Things heated up when Leung made a move past Francis inside in turn three, pushing wide as contact ensued. It appeared as though Leung came back across the track as his front grip increased with slower exit speed, and he connected with Kacic, who was slipping past on the inside as Leung and Francis battled.  The contact continued into turn four, aiding Kacic into a spin.  Leung and Francis continued to finish second and third, with Leung receiving a three-second penalty to move him to the third step on the podium. Kacic recovered to finish fourth, which should set up a great battle for the title at Pat’s Acres. 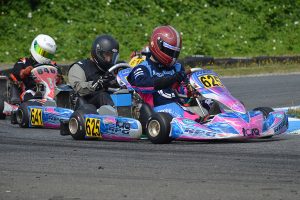 In Masters Max, Nick Goodfellow (Kosmic) delivered a flawless performance, laying down clean laps to start the event by pulling out a quick two-second advantage.  Once settled into his groove, he simply knocked out laps and stretched out a 7.545-second win over Chad Wallace (Birel).  The runner-up result for Wallace was well-deserved after he struggled with engine gremlins on Friday and Saturday.  With the issue remedied, the Clackamas, OR driver advanced quickly from fifth, moving past Chris Eagles (Atomica) and then Eric Gerlof (Tony Kart) with impressively clean and aggressive passed in turn three and turn five. Gerlof joined Goodfellow and Wallace on the podium, while Eagles took fourth ahead of Michael Groff (Kosmic).  Zach Pettinicchi (Tony Kart) won the TaG Senior class over Peter Chung (Maddox).

The LO206 Senior main event quickly developing into a battle between siblings Dalton and Brady Egger, and Jacob Gulick (Tony Kart). The trio worked together quickly to stretch away to set up for the final lap, as Brady, the youngest of the three Egger brothers, sat glued to the rear bumper of Dalton’s ex-RPG Kosmic. Gulick was in a tough position from the get-go, having to go head-to-head against the siblings.  The Vancouver, WA driver knew he needed to get to second to challenge for the win, but he just ran out of time, getting to the inside of Brady on the final lap in turn 11 in hopes of challenging Dalton at the line.  Brady attempted to hold the outside, but could not and shot across the grass inside the turn 12 apex curbing, almost collecting his brother when he returned to the racing surface. This development gave Dalton a straight run to the checkered flag and a 0.596-second win.  Brady Egger finished second ahead of Gulick, while Derek Wang (FA) and Vitali Tchikichev (FA) completed the top-five. 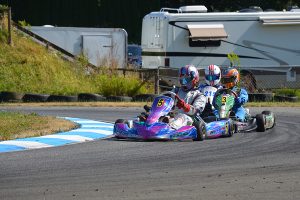 Dalton Egger came away with the win in Briggs 206 Senior (Photo: Dalton Egger)

Josh Pierson (Tony Kart) swept the weekend’s main events in the LO206 Junior class, coming out on top of what was shaping up to be a wild finish on Sunday.  Cooper Becklin (Birel) locked onto Pierson’s rear bumper from the very start of the 16-lap final, and was joined by Carsen Kunz (Kosmic) to make it a front-running trio that would draft together until the late-race attack. Pierson appeared to be a sitting duck, as Becklin never flinched from his position in second, waiting for the final lap. Kunz needed to make a move to second if he wanted a shot at the win, so he worked past Becklin with three to go, but the pass allowed Pierson to gain a little gap.  Try as he may, Kunz could just not get back to Pierson’s rear bumper to set up for the final overtake.  Pierson held off his challengers to score the win, while Kunz took second ahead of Becklin. Zach Franzke (Kosmic) and Daytona Arnzen (Exprit) completed the top-five. Pierson also added a victory in the Mini Swift category.

In LO206 Cadet, Graham Trammell (Tony Kart) and Trey Arnzen (Exprit) put on another exciting one-on-one battle, swapping the lead on several occasions.  Arnzen scored the win on Saturday, and Trammell paid him back on Sunday with a victory of his own, to pair with his win in Micro Swift. Preston Franzke (Kosmic) finished third after turning his fastest laps of the weekend. 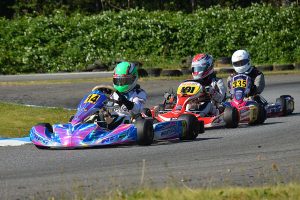 Trammell made it two on Sunday when he won the Micro Swift main event, finishing off a sweep of the day.  Antonio Constantino (Atomica) finished second ahead of Brody Nieto (Kosmic), who laid down his best laps of the weekend to make his first trip to the podium. Ryland Eagles (Atomica) finished fourth.

The series will now turn its attention onto the iconic Pat’s Acres Racing Complex in Canby, OR for the finale on September 13-15.  Increased numbers are expected for the race, which drew a massive 206 contingent. Positive feedback from the Chilliwack event included interest from many of the WCKC drivers to trek to Pats to join the season-end race in all the categories.