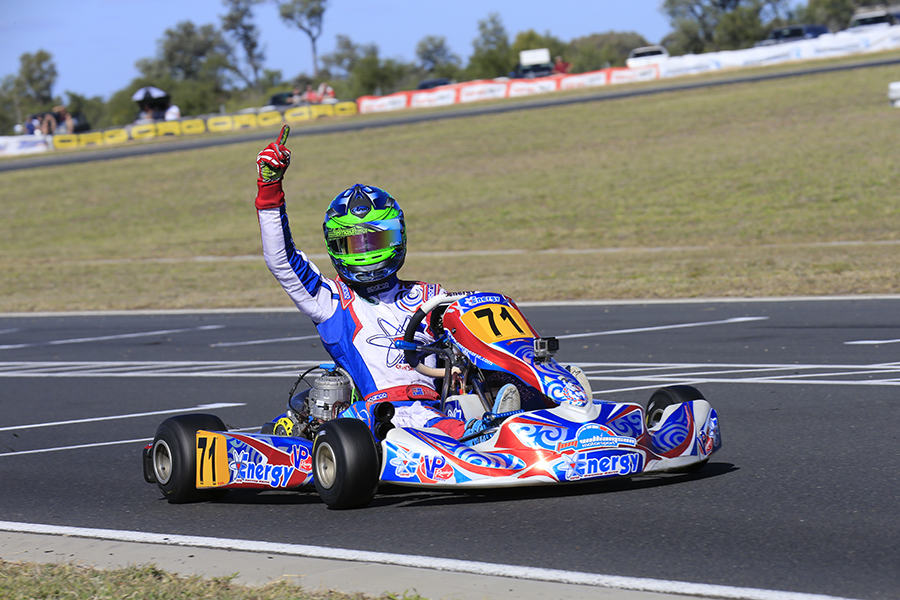 Joshua Fife crossing the line for his first round win in KZ2
(Pic: Coopers Photography)

The Australian Kart Championship’s first visit to Emerald in Central Queensland has proven to be a Championship changing affair for many of the categories chasing down title glory at Port Melbourne’s Todd Road in September.

A new track that many competitors hadn’t raced on before delivered outstanding racing throughout the finals and all but one of the Championships supported by Jayco and Castrol EDGE will be decided in Victoria. 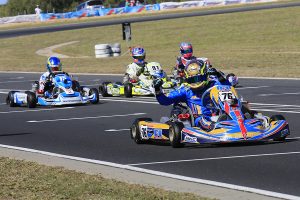 TWM Energy’s Joshua Fife started the weekend in the KZ2 Gearbox category some four points ahead of early Championship leader, Ricciardo Kart’s Troy Loeskow, however his performance to win the final and three of four heats saw that lead extend to 28 points on Sunday afternoon.

He was separated from Loeskow in the final by CRG’s Pierce Lehane. Lehane won the third heat on Sunday morning with a second last corner pass on the young Canberra-based Fife.

The KA2 final welcomed a new winner in Christian Pancione. The Victorian FA Kart pilot stormed through the field to win heat four, while Hughes gained three points on Feeney.

In the final, Pancione got the best of the start from row two and a six kart battle began to play out. Numerous drivers had turns at the point, including Feeney. In the end, Pancione came through for his maiden round win, with Hughes fighting through from eighth for second. Harrison Hoey snuck his CompKart through for third placing on the line in front of Feeney.

KA1 welcomed a new Championship leader on Sunday afternoon in Scuderia PCR’s Kyle Henry-Smith. The mechanical gremlin that befell Scott Sorensen in Saturday’s third heat was still an issue in Sunday morning’s final heat. With diminished numbers after Saturday afternoon’s attrition, Sorensen completed the race to score Championship points. Unfortunately for him, Henry-Smith got through for the heat race victory. 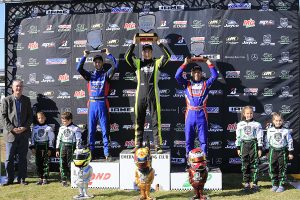 In the final, the pair duked it out lap after lap, in a hectic early battle swapping the lead no less than six times during a two lap stoush. After Sorensen led for much of the race in his HDR Arrow kart, Henry-Smith pushed through to the lead then sped to his second round win in succession by 0.4 seconds. A first time podium finisher in PFG Kosmic driver, Mathew Stenner was a just reward for a year of hard work.

The race of the weekend and potentially of the year was the Cadet 9 Final. Up to seven karts had a chance at taking victory throughout the course of the 16-lap race and it wasn’t decided until the final moments.

Championship leader, Harry Arnett, who won all but one heat race in his Shamick Racing/A1 Engines kart, emerged victorious – however – after a lead from pole, he was shuffled back to sixth placing. He methodically picked his way forward to the front, surviving multiple battles that were playing out to take a 0.4s win over Ryan Tomsett.

Reaching the podium for the first time was Maddison Feather – the Deadly Kart driver becoming the first female driver to reach the podium of the Cadet 9 category since its inclusion at a national level three years ago.

At stages, Feather was in line for victory, as was Toby Dvorak and round two winner, Cadel Ambrose.

James Sera staked his claim for yet another Australian Championship in KA3 Senior. He and Matthew McLean’s season long battle continued throughout the weekend. A tense final saw McLean lead for many of the 20 laps until Sera made the decisive move deep into the second half of the race. The Melbourne Kart Centre proprietor had been pressuring the tail of McLean’s Arrow Kart in his FA Kart before making the move to the lead at the end of the main straight. Whilst McLean fought valiantly, he could not get past the wily veteran, who has taken yet another Australian Kart Championship round win. 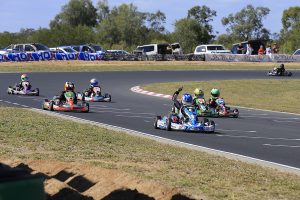 Joshua Rogers has kept the Australian TaG 125 Championship alive after a commanding victory on Sunday afternoon. The MG Engines Praga Kart racer had to push his way forward in a tough final. 10 karts were nose to tail in the early stanza of the race. Rogers was embroiled in the fight, which included runaway Championship leader, Kaos Karting FA Kart driver, Brendan Nelson.

Nelson had the chance to wrap the Championship up Sunday, but Rogers’ tenacity shone through and he took the lead from Kody Garland and once there, never looked like being headed.

It was a harm minimisation process for Nelson who had the charging Josh Car, Cody Gillis and Mitchell Hewitt to contend with. In the end, Rogers won from Garland and Gillis with Car between them and Nelson. The gap between the two sits at 45 points heading to Melbourne.

Velocity Kart Shop CompKart driver, Car was involved in one of the strongest battles of his career in X30.

Since the first heat race on Saturday, Patrizicorse Ricciardo Kart driver Marc Tulloch had been on a tear – winning every race up until the final. This enabled him to cut down the Championship lead held by Car.

Tulloch quickly established a lead in the final to be followed by his Kiwi teammate Dylan Drysdale. But behind, Car went on one of the drives of his career to cut through the field and stage a battle with Drysdale forcing his way into second position. He was forced to redress a pass on Drysdale on the final lap due to yellow flags being on display. This saw Drysdale cross the line second, however due to an earlier race misdemeanour, he was dropped two places. 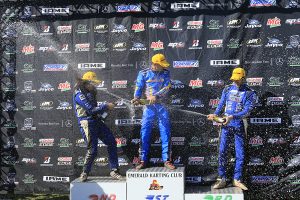 Kacey Mann was a first time winner in KA4 Junior. A three kart battle quickly developed at the front of the pack that involved Championship aspirants Jay Hanson and defending Champion, Cooper Webster.

The battle between the trio raged until the end of the 16-lap race with Hanson crossing the line first and Mann splitting he and Webster. A post-race protest by Webster dropped Hanson one place and handing a first round victory to Mann.

Declan Matthews brought his BirelART home in fourth after a top battle with Zak Varley and Ryan Newton.

James Wharton became the first Australian Karting Champion-elect of season 2017 with his dominance of Cadet 12. The Shamick Racing pilot wasn’t headed throughout the course of the weekend and took a two second victory in the final this afternoon to establish a lead that can’t be caught in Melbourne.

Adrian Haak brought his EVO Kart home in second position in front of Fletcher Harris – his Pentair Water backed kart securing another podium finish – and seeing him well on the way to a second place in the Championship.

Hugo Simpson emerged on top of a three way battle for fourth with Luca Nici and Rhys Smith. 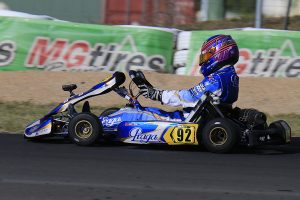 The City of Emerald embraced the Australian Kart Championship, presented by Jayco and Castrol EDGE – with close to 1,000 visitors being brought to the town throughout the week leading up to this weekend’s racing.

Mayor of Central Highlands Regional Council, Cr. Kerry Hayes and State Member for Gregory, Mr. Lachlan Millar were on hand throughout the day taking in the sights, colour and action of the Australian Kart Championship and on hand during the trophy presentations.

Universally among competitors, the challenging 10 metre-wide track was praised for its racing options and the assistance and welcome provided by the host club.

All roads now lead to Todd Road, Port Melbourne for the final round of the Championship over the weekend of September 1-3.