Nicholas d’Orlando on the Move in Le Mans 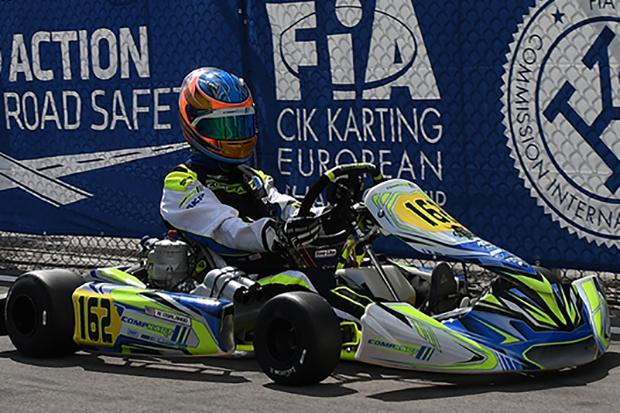 After a quick stop at his home turf in the USA a few weeks ago, Nicholas d’Orlando and his J3 Competition/COMPKART team then promptly returned overseas for the CIK FIA European Championship series in Le Mans, France. The young rookie turned heads at New Jersey Motorsports Park only one week before and that sparked a buzz that carried overseas to Le Mans.  Every race is important, but when you have the opportunity to race at one of the world’s most endured and notable race tracks like Le Mans, the stakes raise even higher and d’Orlando rose to the occasion.

The race weekend kicked off with brotherly teamwork as the young rookie worked with his older brother Michael (Birel ART factory team driver) and unloaded with a fast kart to qualify 9th in his Qualifying group.   This is the second straight race “Nitro” Nick has qualified in the top ten of his Qualifying group, but this effort also gave him his best showing to date in European competition.  His fastest lap time in the Qualifying session would put him 25th overall out of the 71 drivers in the OK (senior) category, earning him a respectable starting position of 10th for each of the four Heat races.

Heat racing would be head-to-head action as each group would compete on track in a ‘round-robin’ type format – (Nick’s Group E vs each of A, B, C & D).  And when the green flag dropped for the first Heat, Nick lived up to his ‘Nitro’ nickname by driving through the field to finish 6th, but then unfortunately a post-race bumper penalty pushed his official finishing position to 16th.  The penalty would not keep d’Orlando down though, as he continued to strike with a finish of 7th in his second heat race.  Though he would finish 22nd in his third heat race, d’Orlando once again overcame that run with a finish of 8th in his fourth & final heat race, capping off his string of strong runs.

To no surprise, the CIK FIA European Championship Series was a full field at Le Mans.  Only weeks after the world famous 24 Hours of Le Mans, d’Orlando was looking to capitalize in front of a packed European crowd and with his solid Heat results, he would earn one of only 34 spots in Sunday’s main event.   His points total from the four Heat races would allow him a starting position of 28th, which is an honor in itself to compete in at this world class level. d’Orlando kept his poise throughout the 22 lap race & proved he is a true competitor by bringing his J3 Competition/COMPKART machine to a very respectable 23rd place finish.

“Our goal coming into the competition at Le Mans was to learn from the past few events and improve our results.” explains Nicholas d’Orlando. “Ultimately we were looking to make Sunday’s main event, so qualifying & heat results were critical.

The COMPKART was dialed in nicely and I’m am getting more comfortable with the competition level here so I couldn’t be happier to make the Final and we hope to carry that momentum into the next round in Finland.”

The J3 Competition/COMPKART team was proud of the weekend they had. The team unloaded with great speed as driver, kart, and crew worked together with great poise on a fast weekend.