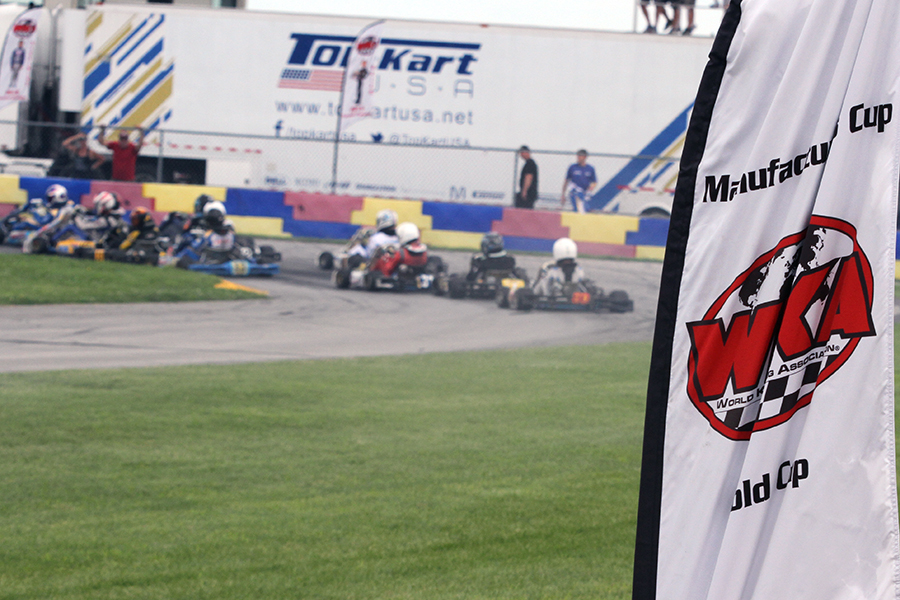 The third event of the 2017 WKA Bridgestone Manufacturers Cup Series took place this past weekend at the New Castle Motorsports Park. The Team Empower Nationals were conducted at the New Castle, Indiana facility with just over 150 entries for the three day event. Saturday and Sunday action counted for Round Five and Six of the ten-race championship chase, taking the program across the halfway point. Great weather made sure all the drivers focused on getting faster and consistent throughout the weekend, vying to be one of the 16 winners. Only 10 drivers left with the first place trophies as six doubled up in the win column for their respective categories.

Overall, there were no major issues on the weekend. The new tire procedure with the marking/stamping by WKA appears to have cleared up any ‘tampering’ with race tires. The new Bridgestone YLM had the bar codes on the front tire, helping to speed up that process. The New Castle Motorsports Park was ready to go when racers arrived thanks to the amazing crew that Mike Adams has assembled.

On-track, there were not many issues. There were a number of false starts throughout the weekend, however, due to the drivers not following the proper procedures of where to punch off and others jolting out of order before the green flag was waved. WKA does not utilize the pushback bumper, and WKA officials made sure the field was at a reasonable speed going into the opening corner. Not many penalties were handed out as well throughout the weekend, with drivers keeping their heads on and not attempting many bad moves. 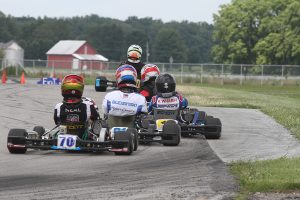 During the winter months prior to the season starting, New Castle Motorsports Park replaced the ‘dragon teeth’ at the apex and exit of each corner, replacing them with larger, more standard curbs. The apex curbs are much larger and eliminate the thought of dipping the inside tires into the grass for that extra real estate when attempting a pass. The apex curbs are also ‘Formal-proof’ from what I can tell after this weekend, as the drivers stayed off them as much as possible. The exit curbing is very similar to that of the GoPro Motorplex with the deep groves that vibrate the kart once you run over them. It does allow for a driver to recover on a missed exit without the fear of dropping a wheel and spinning, something we saw with the old, lower exit curbs. There was talk that some of the curbing has sharp corners, and may be the cause of ripping into a few of the tires. That is still under review as nothing really stood out as a problem. We have two more major events in the next three weeks that will decide that.

Drivers throughout the paddock however said the track had much more rubber than they had seen before. There was no issues with finding grip, and in fact, both days top qualifying results in Pro IAME Senior was about two-three tenths quicker than last years, which had at least 20 more entries. My guess is the rubber will continue to get laid down with the KRA race this weekend, leading into the United States Pro Kart Series the following week and then the SKUSA SummerNationals two weeks later. 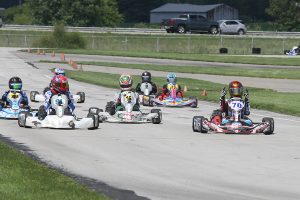 The majority of the finishes at New Castle come down to photo finishes (Photo: EKN)

I enjoy my trip down to the NCMP facility each time I go. It’s become a second home for me and I’m sure many of the midwest drivers that visit 2-5 times a year. When the track first opened, the start/finish line was right in the middle of the short straight along the main building. A couple years ago, another loop was installed toward the end of the long ‘pond’ straight and has continued to be the new permanent start/finish line.

Each race now comes down to a drag race to the checkered flag. On the weekend, 24 of the 35 races were decided by less than one-tenth of a second. The only class not to have a finish within 0.1-second between first and second place was the Pro IAME Junior category. Pro Swift Sportsman and Pro IAME Senior only had two each while all five in Yamaha Junior were a photo finish.

For me, I’m bored with the photo finishes. It seems that drivers just pace themselves to set up for a final run on the last lap. Are we not challenging the drivers enough at the front? Take for example Pro IAME Junior, Tyler Maxson ran a faster lap in the main event then Connor Ferris did in qualifying on new tires – probably due to the help from drafting in the race. In Pro Swift Sportsman, the fast time in the main event by Thomas Schrage on Sunday afternoon (1:12.504) was less than half a second slower from his qualifying time on day one (1:12.130) when the tires were new. What if we gave everyone harder tires, or, make them even softer so we have more tire management throughout the weekend. Just a thought. 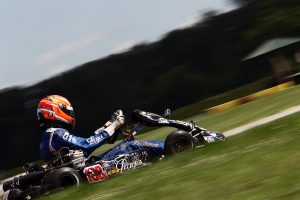 Brandon Jarsocrak is back to his winning ways (Photo: EKN)

After going all of 2016 without a major victory, KartSport North America’s Brandon Jarsocrak is making up for it in 2017. Winning at the Daytona KartWeek, the Praga driver has won half of the main events in the Pro IAME Senior division after only competing at two events. ‘Money’ sat out the Pittsburgh weekend, coming back to score both victories in New Castle. Add in the two USPKS wins (one KA100 and one in IAME Pro) along with the inaugural victory at the Battle of the Brickyard, Jarsocrak is making a case to take over the #1 spot again in the EKN Driver Rankings.

Add to that the performances put on by former WKA champion Dakota Pesek. The Top Kart driver from Ohio has four victories on the year, including the last three. His emotional win in the rain at Pittsburgh just days after the passing of his father propelled him back into the championship chase. Two wins in New Castle help put him at the top of the Bridgestone Mid-Season Shootout and closer to the overall championship leader Braden Eves with two weekends remaining. 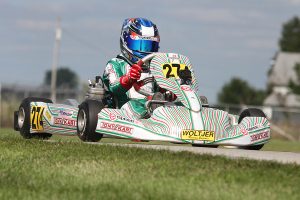 Georgia driver Tyler Maxson ended the 2016 on top, winning the Superkarts! USA Pro Tour Mini Swift championship. Maxson, now 13-years-old, is halfway into his rookie Junior season. Prior to the WKA weekend in New Castle, his best performance was a runner-up result at the Florida Winter Tour finale in Rotax Junior. Carrying the graduating #1 plate into X30 Junior, Maxson has not been a factor on the SKUSA Pro Tour through the WinterNationals and SummerNationals. This weekend proved the time spent working with the Speed Concepts Racing operation has paid off. Maxson walked away Saturday from the field, winning both heat races and the main event for his first major Junior victory. He returned the following day to find himself looking up at nearly the entire field, starting 19th after a stuck throttle forced him to retire in the Prefinal. The 20-lap Final was a work of art, knifing his way through the field without force or bad decisions, just more confidence then the other drivers and of course a fast kart. Into the lead with two laps remaining, Maxson drove away for his second victory of the weekend and certainly earned the respect of the paddock with his performance. We may see more of Maxson in the future.

Made in the USA 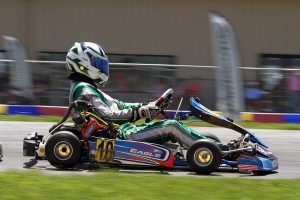 Comet Eagle has four of the Briggs 206 wins on the season (Photo: EKN)

The Briggs 206 Senior class is new to the WKA Manufacturers Cup Series, and is allowing a group of Made in the USA chassis manufacturers to step in and show their skills. Four of the six wins on the year have been earned by the Comet Eagle chassis. Corey Towles dominated the action in Daytona, and David Kalb Jr. was the quickest throughout the weekend in his Eagle at New Castle. Kalb, a former WKA Gold Cup champion, won both main events on the weekend while recording a 1:15.949-lap time in Heat #2. The #OperationGrassroots movement has not only helped to increase the number of karters, it is helping the American-made chassis manufacturers get back into sprint racing. 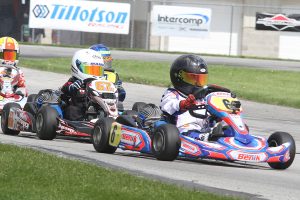 Cadet racing in 2017 is a battle between Benik and Nitro Kart (Photo: EKN)

Cadet racing is a major part of the industry right now, as we continue to see more young drivers jumping into the sport. The chassis manufacturers are bidding to be the new and greatest product for the market, and in 2017 it appears to be a battle between Nitro Kart and Benik. The last few years, Benik has shined and finished seventh in the 2016 EKN Constructors Championship, earning points in only Cadet classes. Enter Nitro Kart. The Nick Tucker creation has been taking the Cadet divisions by storm this year, winning major events and earning a number of podiums. This weekend, the score was 2-2 in the Pro Swift Sportsman and Mini Swift. Santiago Trisini won both in the older category for Benik with Ben Maier coming away with his first two WKA victories in Mini Swift for Nitro Kart. Benik took the weekend win as they saw Chloe Chambers earn victory in Yamaha Sportsman aboard their chassis. We will continue to watch this battle as we enter the second half of the season. 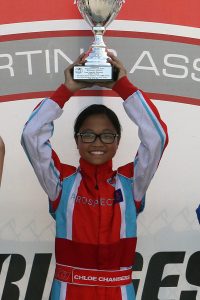 The lone female driver to win on the weekend was Chloe Chambers. The 13-year-old from New York made her WKA debut, New Castle debut, and first starts aboard Pro Swift Sportsman and Yamaha Sportsman rides. Aboard a Benik kart in both categories under the Mike Doty Racing stable, Chambers continued to show speed throughout the weekend. She flirted with the podium on Saturday in Pro Swift, placing fourth while ending up fifth in Yamaha. Chambers came back Sunday with more speed, recording her first pole position in Pro Swift winning the Prefinal. After establishing a lead in the Final, Chambers was pushed back to third. Just before that main event, Chambers scored her first WKA victory in a great slingshot move to go from third to first in the final run to the checkered flag in Yamaha Sportsman. Add in Annie Rhule, who continues to improve each weekend out with the Checkered Motorsports operation. The Pittsburgh driver, who place runner-up in Yamaha Sportsman on Saturday, is on the verge of earning her first WKA victory. Add in Junior rookie and 2016 WKA champion Madison Campeau, there are a good crop of young female drivers in WKA competition.

For complete coverage of the weekend, head over to the EKN Event Page. The series returns to action in just over a month as WKA heads to the reconfigured Wolf Paving Raceway – home of the Badger Kart Club – in Dousman, Wisconsin on August 25-27.