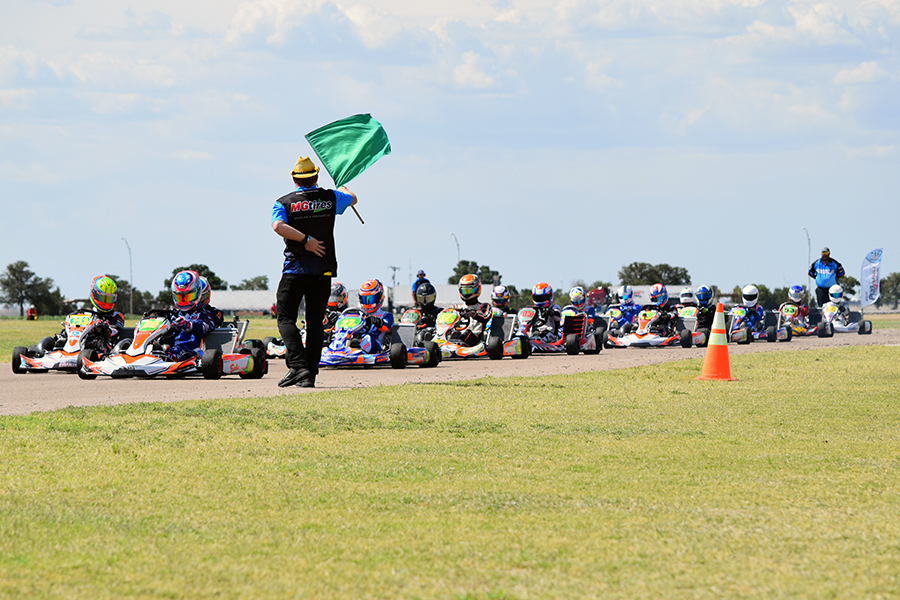 The Texas ProKart Challenge found a gem in the panhandle area of Texas. The gem is the Amarillo Kart Circuit, sitting alongside the busy Interstate-40, waiting for karters to find it. P1 Promotions, who direct the Superkarts! USA regional program, did just that and added a trip for the 2017 championship schedule. Months of preparation to make the facility ready for the top drivers in the southwest to converge at AKC culminated on July 14-15 as the Texas PKC program hosted the fourth round of the title chase. 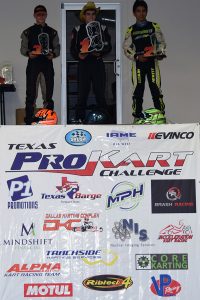 P1 Promotions made sure everyone who attended the Amarillo Kart Circuit enjoyed the weekend, on and off the track. A complimentary dinner, sponsored by Paintmor was provided for those in attendance Friday evening. That was followed by rides aboard the Superkarts! USA two-seater kart with SKUSA Pro Tour S1 point leader Jake French at the wheel. A full opening ceremony was conducted before the racing action began, including a color guard and driver parade. The racing around the replica of the Formula One Turkish Grand Prix Istanbul Park circuit was among the best all season, with drivers giving two thumbs up for the layout. Texas PKC continues to provide unique awards, with the ‘Amarillo Boot’ trophy given out to the top-three drivers in each category along with a TPKC cowboy hat for the winner.

“It was great to finally host the event and see that all of the hard work paid off,” stated Gina French of the Texas ProKart Challenge. “I can’t thank our staff, all the racers and teams who made the trip here to enjoy what we think will become a great track to attend each year. Our dinner Friday was a success with everyone in attendance. The racing was hands-down the best racing we have seen all year. The two-seater was a blast, and it further helped cement the fact that I do not want to race. This side of the track is just fine for me. A big thank you to Billy Musgrave and Robert Heck for making the two-seater possible!. Overall, it was a thrill to be able to bring our program here to Amarillo and I hope to make this a must-event for everyone in the southwest.”

Brett Mitchell is on a roll entering the second half of the Texas PKC season in the MPH Racing Team X30 Senior division. Mitchell recorded his second straight event sweep, earning a third straight feature win to help increase his championship lead. Mitchell cleared the field by three tenths of a second in qualifying over Colorado driver Greg Welch. It was a wire-to-wire day for Mitchell, leading all 12 laps in both heat races before securing the main event victory by holding the lead for 16 laps. Max Hewitt drove up to second with Peyton Long placing third, each earning their second trip to the podium on the season. Nathan Ratton and top championship contender John Berry completed the top-five. 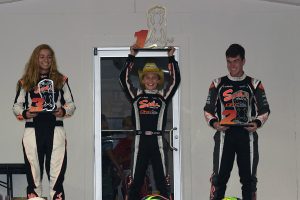 Backing up his win in Round Three was Ethan Arndt in the Trackside Karting Services X30 Junior category. Arndt did not sweep the day in Amarillo as he did in Katy last month, starting out 71 thousandths short of the fast time in qualifying to Jett Morton. The opening heat race went to Morton after he led all 12 laps while Arndt dropped to third behind Adrian Cruz. The three each took a turn at the point in the second heat, with Arndt able to secure the position late and score the win. Morton jumped out to the lead on the opening circuit of the main event. Issues dropped him out of contention, allowing Arndt to take over the lead. From there, Arndt led the remainder of the 16-lap race to score his second straight victory. Maxwell Waithman drove to second as Travis Wiley earned his first podium of the season in third. Cruz dropped to fourth and Tyler Orum finished fifth.

Nineteen shifterkarts made up the Dallas Karting Complex / Core Karting Stock Honda race group featuring four categories – S1, S2, S3, S4. The championship chase tightened up in the S2 Semi-Pro Stock Honda division thanks to the event sweep by Nathan Adds. The Round One winner was left off the podium in Katy, bouncing back with his first sweep of the year. Adds posted the fast lap in qualifying 59.487 to set the first official track record in competition. Championship leader Riley Dickinson was second in the order, however, retired on lap five of the opening heat race. That put Andretta Young into the lead challenger position. Adds led all 12 laps of the first heat and did the same in Heat #2. Young was sitting second until she lost her rear bumper. Dickinson was charging through the race group and finished the heat in the second spot at the checkered flag. The duo ran 1-2 throughout the main event, with Adds the only driver to maintain below the 1-minute lap barrier, establishing a six-second advantage for the victory. Young bounced back to end up third ahead of California driver Robert Heck Jr. and Blair Hosie. The S1 Pro Stock Honda class featured two drivers from Colorado facing off with Christian Bird sweeping the day over Cory Milne. 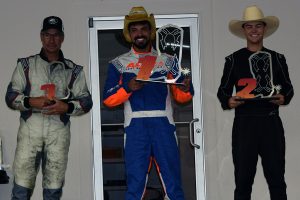 Diego Villafani came through with the win in S3 Novice (Photo: Carolyn Wiley)

The S3 Novice Stock Honda division welcomed its largest field of the year with seven drivers. Championship leader Diego Villafani was able to record his second straight victory. Reilly Cann set the pace throughout the day, posting fast time in qualifying and winning in class for both heat races. After slipping back at the start, Cann drove back up to the lead after Villafani led for five circuits. Cann showed the way until retiring on the final circuit, handing the lead and the victory to Villafani. Dylan Towne placed runner-up with Cann classified third in class. Nathan Stewart scored a second straight victory in the S4 Master Stock Honda class. SKUSA Pro Tour winner Rod Clinard led throughout the day with fast time in qualifying and finishing first in the two motos. Stewart took over the lead on lap five of the main event, never looking back to win by over two seconds. Juan David Gomez finished third. X30 Master point leader Miguel Mier extended his championship lead with a fourth straight victory, recording an event sweep ahead of Thane Morgan and Steve Ratton.

Jack Jeffers scored his third victory of the season, sweeping the Mindshift Financial Mini Swift category for the first time this year. Jeffries scored maximum points, but the battle was not easy. Qualifying was decided 34 thousandths of a second with Jeffers edging out John Burke for fast time. The two ran 1-2 throughout the 10-lap opening heat race while Jeffers ran away from the P2 battle for the win in Heat #2. Aden Rudolph joined Jeffers and Burke at the front, with the trio getting away from the field to decide the victor. Jeffers led throughout the race with Rudolph making a last lap pass attempt. Jeffers was able to fight him off, and reach the checkered flag first. Burke slipped past Rudolph to take the runner-up spot on the podium. Chase Gardner and McKenzy Cresswell made up the top-five. 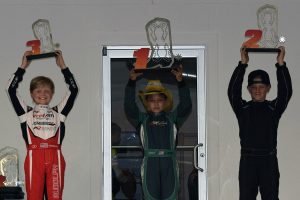 Nuclear Imaging Micro Swift championship leader Cooper Shipman appeared to be the driver to beat all day. Shipman posted fast time in qualifying and led all the laps in Heat #1. Gabby Selden jumped up into the lead at the start of Heat #2, relinquishing the position to Shipman after two circuits as he went on to score the win. Selden recovered from starting in the back for the Final due to a disqualification after Heat #2, moving up the order and into the lead by lap four. Shipman remained on the bumper of Selden for the remainder of the race, unable to complete a pass for the lead. Selden scored her first series victory as Shipman settled for second with Joseph Moss a close third.

Additional awards were handed out during the podium ceremonies. The Texas ProKart Challenge High-Five Award was given to two drivers for their performance on the track. S2 driver Andretta Young battled her way back from a meatball flag in Heat #2, making some insane passes along the way to finish third overall in the race group. One of the passes was a great move at turn 10, slipping past two drivers at one time. The second High-Five went to Micro Swift driver Gabby Seldon. Along with her smart driving all day, she bounced back from a disqualification in Heat #2 to drive her way to the front of the field, scoring her first series victory by never giving up.

The Texas ProKart Challenge is off for the month of August with the Superkarts! USA Pro Tour SummerNationals taking place at the New Castle Motorsports Park in Indiana. The series returns to action on September 16-17 at the famed North Texas Kartway in Denton, Texas. Make sure to watch the series website texasprokartchallenge.com for event details forthcoming, as well as Texas ProKart Challenge on Facebook and Instagram.