Maranello Kart: What a Success in the Italian Championship 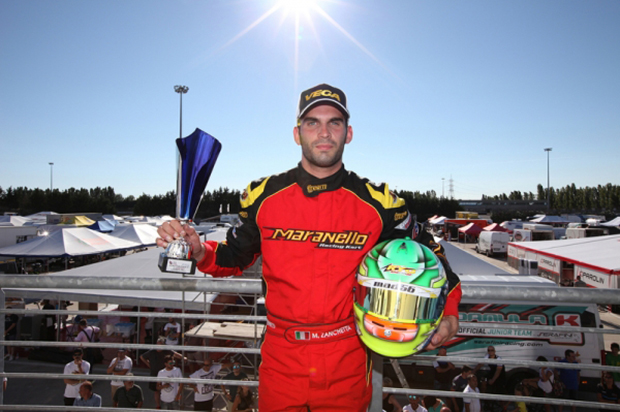 Zanchetta got on the podium at the fourth round of the Italian Championship in Adria and confirms his classification lead in KZ2. Miastkowksi victorious in KZ3 Junior, but Bombardelli still leads it. Maiden win for Zanotti in KZ3 Under. Double podium for Tonoli in KZ3 Over.

The fourth round of the Italian Championship has been a Maranello Kart triumph at the Adria Karting Raceway. The flag of the Italian outfit has been waved high by several strong results in all the shifter categories.

ZANCHETTA ON TOP OF KZ2

In KZ2, Marco Zanchetta has celebrated in the best way his Championship lead on Maranello-Tm. Despite some setup problems in the heats, the Maranello Kart’s driver recovered well bouncing back from an excursion in Race-1, taking the final eighth place. This result allowed Zanchetta to start Race-2 from the pole position, due to the top eight grid inversion, and he lined up alongside team mate Marco Pastacaldi – who also enjoyed a front row start due to the seventh place obtained in Race-1. In Race-2, Zanchetta confirmed his place among the protagonists, taking the third step of the podium after leading most of the second Final, while Pastacaldi – also among the quickest – took the fifth place.

Zanchetta confirmed his leadership in KZ2 and he will get to the closer of Siena next September 3rd with a 40 points lead (considering two jokers) on his nearest rival. In other words, the Italian title is… virtually under his belt.

“We struggled a bit to find the right setup early into the weekend  – Marco Zanchetta commented – but then things improved, thanks also to some setup changes. Overtaking is difficult in Adria, and in the heats it was all about damage limitation. In Race-1 a driver ahead of me spun and to avoid him I had to go out of the track. When I rejoined I was on the back of the field. My rage helped me to recover and I closed eighth. I then started Race-2 from the pole and I was aiming to the victory, but honestly Palomba was quicker. I did not expect Albanese attack on the final lap, but third is a good result for the Championship anyway.”

Alberto Cavalieri has been quite unlucky on Maranello-Modena instead. He has been great in the heats taking a third and a sixth place, but then had to retire from Race-1 when holding P6.  Cavalieri has bounced back early on in Race-2, but then he slipped down to the 19th place. That was a pity as the premises were good to aim to a podium finish. Alessandro Bissolo was 17th in Race-1 at his debut in the Italian Championship on Maranello-Tm, but then he had to retire from Race-2.

MIASTKOWSKI TAKING THE WIN IN KZ3 JUNIOR AS BOMBARDELLI LEADS

Maranello Kart’s drivers have been protagonists also in all the KZ3 classes, that were battling out the second act of the season after the opener held in Sarno. A great Marco Miastkowski had the upper hand in KZ3 Junior. He was the best after heats and won the first Final, as team mate Mattia Giannini was third and classification leader Luca Bombardelli was fifth. The three Maranello drivers have also been very quick in Race-2. Bombardelli and Giannini claimed another podium finish respectively in second and third place, while Miastkowski was fifth. Roberto Cesari was also among the quickest with the seventh place in Race-2 following the 11th in Race-1.

Bombardelli keeps the lead of KZ3 Junior’s classification with 96 points, while Cesari is fourth at 55, Miastkowski fifth at 52 and Giannini sixth at 42.

MAIDEN VICTORY FOR ZANOTTI IN KZ3

Alessio Zanotti dominated KZ3 Under on Maranello-Tm in the heats and took his maiden victory in the Italian Championship in Race-1. The other Maranello Kart’s driver Michael Dalle Stelle was sixth in Race-1, while Francesca Cifola was 19th, Inerio Cittadini 21st, Francesco Alaimo 27th, Davide Zecca 29th and Stefano Palmeri 31st. Zanotti closed his Race-2 in sixth place, while Dalle Stelle was eighth. Cittadini recovered well up to P13, while Alaimo was 19th, Zecca 26th and Palmeri 28th. Francesca Cifola had unfortunately to retire two laps into the race.

Thanks to the victory in Race-1, Zanotti has recovered up to the fifth position of the classification being 31 points shy of the leader. Dalle Stelle is seventh 40 points short of the top, but both drivers can still aim to get the title in the closing race.

DOUBLE PODIUM FOR TONOLI IN KZ3

Maranello Kart’s colors have been shining once again in KZ3 Over, especially thanks to Cristian Griggio who secured the pole position and was the quickest after heats, and Andrea Tonoli who has always been among the quickest of the category. Tonoli ended his Race-1 on the podium in P3, leading Griggio. Tonoli was then second in Race-2, while Griggio had to concede the third place he secured at the flag, due to a 10s time penalty. The other Maranello Kart’s driver Attilio Borghi, was 11th in Race-1 and 12th in Race-2.

KZ3 Over’s championship is also wide open to all results and Andrea Tonoli is still fighting for the third place, having only 24 points to recover. Griggio is seventh instead, 85 points short of the lead.

All classifications are available at www.acisportitalia.it