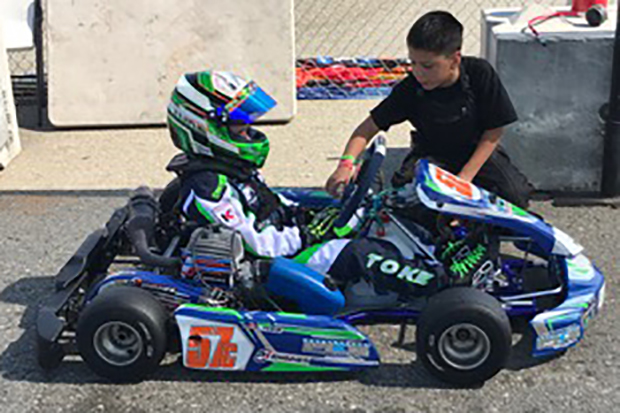 Another successful event is in the books for cadet driver Logan Toke, taking home the victory at round six of the Los Angeles Karting Championship (LAKC) at CalSpeed Kart Track this past weekend. The Micro Swift pilot has won four of the last five rounds of the LAKC series, also coming into the event fresh off back-to-back wins at the IKF Grand National and SuperKarts! USA (SKUSA) ProKart Challenge races in Santa Maria, California earlier this month. He continues his California winning streak, sweeping the event and landing himself on top of the podium, a familiar spot for the young driver.

Toke started off the event by securing the pole position in qualifying by three tenths of a second. He continued on to win the heat race by nearly three seconds, earning himself a front row starting position and becoming the driver to beat.

In the main, Logan and racing buddy AJ Zarcone drove away from their competitors as soon as the green flag flew. The pair drove fast and consistent for 17 laps, forming a large, five-second lead on the rest of the field. On the last lap, the pair began to battle, as Zarcone went for an early pass on Logan to take the lead. Logan battled back, passing him back in the last turn. Logan was able to hold on to the lead to take home the win by 0.048 seconds, a close and great battle between friends. Logan stood on the top step of the podium for the fourth time this season at the LAKC series.  Austin Menka finished third and joined Logan and AJ on the podium.

Success is not easy in the world of motorsports and Logan has a group of partners supporting him every step of the way. A special thank you to Horizon Tower LLC., RLV, REV SLO Fitness, NWM Advisors LLC., Cannon Power Group, Top Kart USA, PKS Kart Supplies and P1 Engines.

Next on the schedule for Logan Toke will be a trip to the Hoosier State for the United States Pro Kart Series (USPKS) at New Castle Motorsports Park, July 29-30th. Following this event, he will travel back to Indiana two weeks later for the the SuperKarts! USA (SKUSA) SummerNationals, the final stop on the Pro Tour schedule, at New Castle Motorsports Park, August 12-13th.

For more information on Logan Toke or to become part of his racing program, please contact Michael Toke at Michael@MJTAssoc.com.