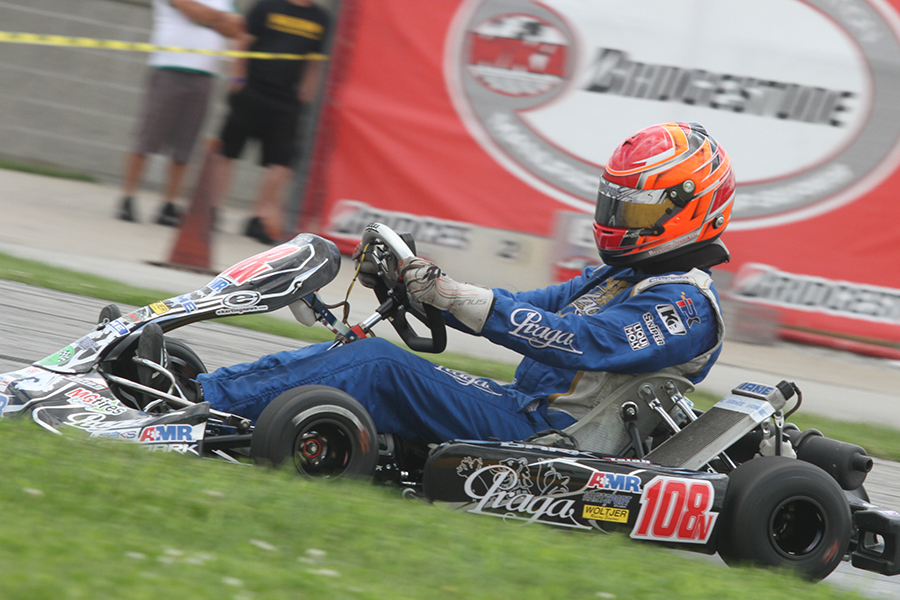 Brandon Jarsocrak scored the victory in Pro IAME Senior for his third of 2017 (Photo: EKN)

The final day of action completed Sunday at the New Castle Motorsports Park for the WKA Bridgestone Manufacturers Cup Series Team Empower Nationals. The New Castle, Indiana facility provided great weather all weekend long with warmer conditions all day. The racing all weekend was great, with many of the races coming down to the wire. In the end, six of the eight classes saw drivers double up in the win column.

Brandon Jarsocrak notched his third victory of 2017 at the Manufacturers Cup, coming out of the 20-lap battle in the KartSport North America Pro IAME Senior as the top driver. Top qualifier and Prefinal winner Brandon Lemke (Top Kart) led the majority of the race with Braden Eves (Zero Error / Kosmic), Alexander Kardashian (Top Kart) and Jarsocrak. Kardashian led early with Lemke taking over. It looked as they would be able to lock up and get away, however the rest of the lead pack, including local guest Zach Holden (Comet / Tony Kart) would not let that happen by breaking them up. Holden retired at the halfway point with a broken chain, holding up South African driver Fabienne Lanz (VSR / Tony Kart), thus making it four at the front. Coming to the white flag, Lemke and Jarsocrak went back and forth for the lead. Jarsocrak took over the point at turn one, and Eves went on the attack for second on Lemke. This gave ‘Money’ enough space to reach the checkered flag first. Eves edged out Lemke for the second spot with Kardashian placing fourth. Lanz followed back in fifth. 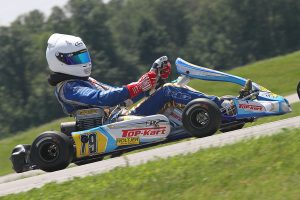 Braden Eves (FA Kart) and Saturday winner Dakota Pesek (Top Kart) came away as the top two drivers in the FranklinKart.com Yamaha Senior. Eves set fast time in qualifying with Pesek coming away from the Prefinal battle with the win. The two were able to break away from the field in the 18-lap main event. The drag race to the line went to Pesek by 24 thousandths, earning his second win on the weekend and third straight counting the Sunday victory at Pittsburgh. Tyler Trent (Tony Kart) won the battle for the final step on the podium with Jake Venberg (Merlin) and Marina Walters (Top Kart) placing fourth and fifth.

It was a dramatic day in the Woltjer Racing Engines Pro IAME Junior division. Round Four winner Tyler Ferris (Top Kart) set fast time in qualifying and came away with the Prefinal win after both Saturday winner Tyler Maxson (Tony Kart) and Connor Ferris (Top Kart) retired early while leading. Each started at the back of the 21-kart field in the 20-lap Final. Up front, Junior rookie Kaden Wharff led a Top Kart train of Ferris and Pauly Massimino while fellow rookie Caleb Bacon (Tony Kart) looked to move forward. Everyone however was watching the progress of Maxson, who continued to click off the fast laps of the race. By the halfway point, Maxson was stalking the top-five, and lap 18, took the lead from Wharff. Maxson went on to take the second victory of the weekend with Bacon able to edge out Wharff at the line for second. Tyler Ferris ended up fourth with Massimino in fifth. 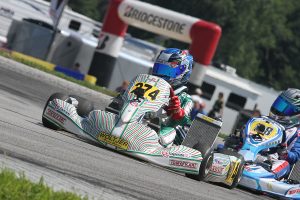 Tyler Maxson came from deep in the field to score the Pro IAME Junior win, his second of the weekend (Photo: EKN)

Sunday was a notable day for the championship chase in the Comet Racing Engines Yamaha Junior class. Championship leaders Elliott Budzinski (Tony Kart) and three-time winner Colin Neal (Tony Kart) each had issues in the main event. Budzinski retired early after contact while Neal, who won the Prefinal, was leading the main event until a chain broke with four laps to go. This left three drivers to fight for the victory – top qualifier Spike Kohlbecker (Margay), Tyler Ferris (Top Kart) and Caiden Young (Tony Kart). Coming to the line, Kohlbecker was able to lead out of the I-70 corner. Ferris set up for a pass on the inside down the stretch, but switched back to the outside as Kohlbecker drifted to the left. This slowed Ferris progress enough in the slingshot attempt to give Kohlbecker the advantage at the checkered flag by 87 thousandths of a second. Young followed closely in third with Jack Dorsey (Tony Kart) beating Zack Pretorius (FA Kart) for fourth.

Santiago Trisini (Benik) was one of the six double winners on the weekend, scoring the Sunday victory in the IAME USA East Pro Swift Sportsman division. Four drivers made up the lead pack with top qualifier and Prefinal winner Chloe Chambers (Benik) getting away at the start thanks to a rough opening corner that included a flip by point leader Ashton Chilton (Nitro Kart). He and everyone else walked away unhurt as the race continued. The trio ran her down by the halfway point with Trisini taking over the point. From there, he led the group for the remainder of the race and won the race to the checkered flag for the victory. Thomas Schrage (PCR) took second with Chambers in third. Connor Zilisch (Engery) was a close fourth with Elio Giovane (Benik) winning the battle for fifth. 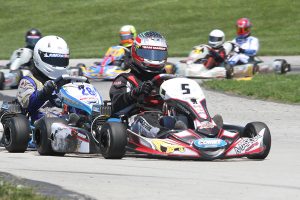 Spike Kohlbecker was one ‘Fast Cat’ to earn the victory in Yamaha Junior (Photo: EKN)

The Allison Racing Engines Yamaha Sportsman division went down to the wire. Garrett Adams (FA Kart) and Saturday winner Sam Hinds (FA Kart) led the majority of the race with Chloe Chambers (Benik) and Annie Rhule (Energy) looking to make a move. It was not until the last push to the checkered flag that anything happened. Adams and Hinds went side-by-side with Chambers pulling the slingshot, going from third to first by the checkered flag to score her first WKA victory in her first event with the series and visiting the New Castle circuit for the first time. Adams was off by 46 thousandths with Hinds in third. Rhule was fourth with Mateo Rubio-Luengo (Benik) in fifth.

It was four drivers in the hunt early for the CRPRacing.com Mini Swift category until it came down to two at the end. Saturday winner Ben Maier (Nitro Kart) and Mateo Rubio-Luengo (Benik) were the two left standing at the end, with Maier winning the race to the checkered flag by three hundredths of a second. Sebastian Ng (Nitro Kart) was able to make a run at the end of the race to steal third away from Christian Miles (Formula K) and Elliot Cox (Energy) who faded away at the end.

The victor in the Briggs 206 Senior class was decided off the track. On the track, it was a three wide finish with Evan McCorquodale (Track Kart) crossing the line first by four hundredths of a second over David Kalb Jr. (Eagle) and Eric Fagan (Track Kart). In tech, McCorquodale failed a muffler measurement, and had the win removed. This put Kalb on top of the podium for a second time this weekend. Zach Linsell (MGM) was moved to third ahead of Kyle Fogt (CompKart) and Dustin DeMattia (Keener Kart).