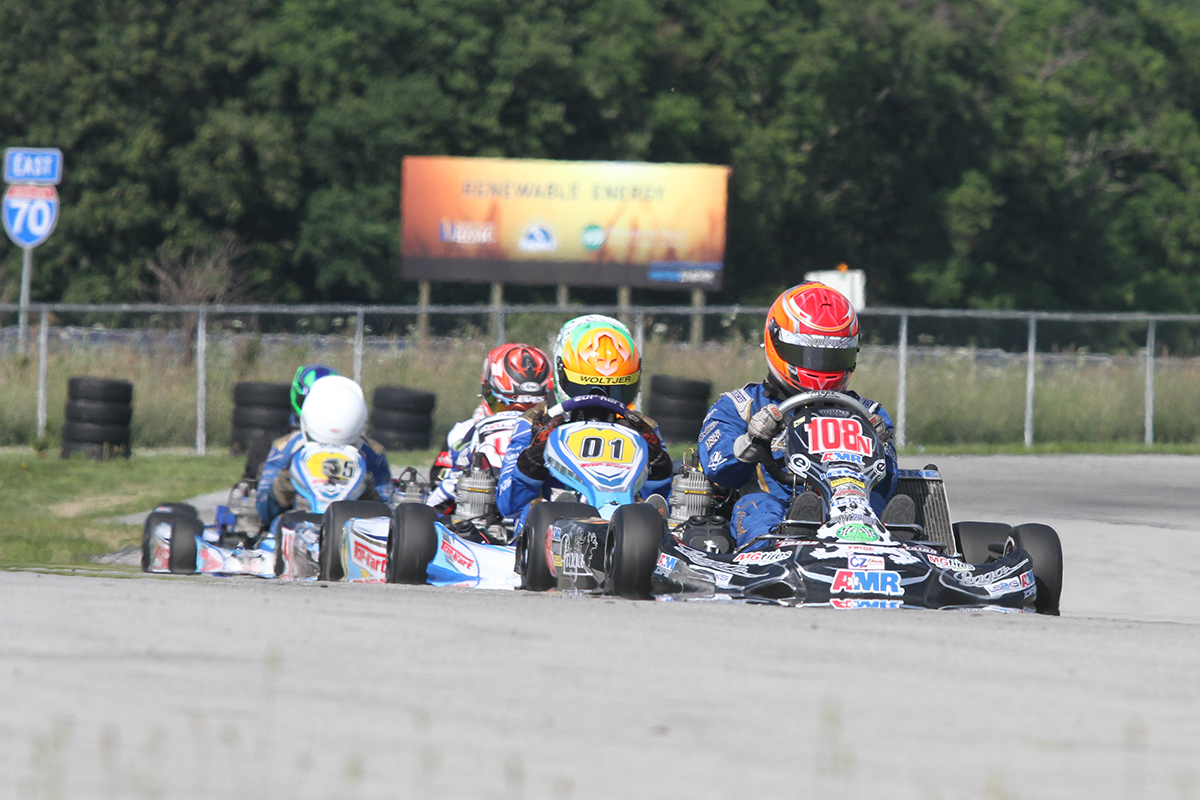 The opening round of racing for the 2017 WKA Bridgestone Manufacturers Cup Series Team Empower Nationals went into the books Saturday at the New Castle Motorsports Park. The fifth round of the 2017 championship chase marked the halfway point of the season, with a solid turnout of competitors in all eight categories, nearly reaching the 150 mark for the day. After cloud covered the New Castle, Indiana area for much of the morning, the skies cleared and the humidity rose, making for a challenging day for the competitors chasing the right setup.

Five drivers had the pace to compete for the win in the KartSport North America Pro IAME Senior division. Top qualifier Braden Eves (Zero Error / Kosmic) and double heat race winner Brandon Lemke (Top Kart) were joined by Daytona winner Brandon Jarsocrak (KSNA / Praga), Garrett Johnston (Top Kart) and Alexander Kardashian (Top Kart). In the end, it came down to the 3 B’s. They shuffled for the lead throughout the main event. Coming to the white flag, Eves made a great move at the I-70 corner to go from third to first. That shuffled them up taking the white, and Jarsocrak emerged from the first turn with the lead. He held the advantage throughout the last mile, crossing the line first for the victory. Eves came in a close second over Lemke with Kardashian placing ahead of Johnston. 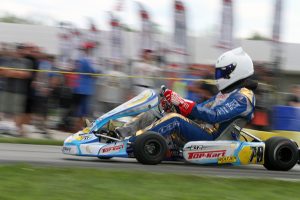 Dakota Pesek won the Yamaha Senior final in a race to the checkered flag (Photo: EKN)

Eves came into the weekend leading in both championships, including the FranklinKart.com Yamaha Senior division. Eves (Zero Error / FA Kart) found himself battling with Alexander Kardashian (Top Kart) in qualifying and the heat races. Kardashian set fast time in qualifying and won Heat #2 with Eves taking the opening heat. Dakota Pesek (Top Kart) and Jake Venberg (Merlin) joined them at the front in the main event. The two Top Kart drivers locked up and were able to get away, deciding the race on the final circuit. Kardashian led going into the final corner, driving the defensive line. Pesek pulled a ‘Cole Trickle’, running the outside line and making it hold through the corner. Kardashian had to pinch the exit, slowing his pace. This allowed Pesek to carry the momentum into the lead and to the victory by 32 thousandths of a second. Kardashian settled for second with Eves beating Venberg for the third podium step. Marina Walters (Top Kart) completed the top-five. 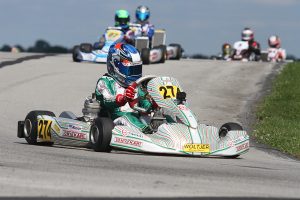 Colin Neal (MDD / Tony Kart) and Elliott Budzinski (Kart Craft / Tony Kart) came into the weekend tied for the championship and in the win column with two victories a piece. They broke both ties with a showdown to close out the day. A red flag came out with five laps remaining in the main event, involving top qualifier Zack Pretorius (Comet / FA Kart), double heat race winner Spike Kohlbecker (Margay) and Tyler Ferris (Top Kart). The incident bunched up the field for a shootout to determine the day’s winner. Neal and Budzinski came out as the top two drivers, with Neal holding the advantage at the checkered flag for his third victory of the season. Budzinski came 41 thousandths short at the line with Matthew Mockabee (Comet / Tony Kart) joining them on the podium. Junior rookies Kaden Wharff (Top Kart) and Donald Whorton (FA Kart) completed the top-five.

The IAME USA East Pro Swift Sportsman came down to two drivers. Santiago Trisini (Benik) and Annie Rhule (Energy) were able to get away from the field early and maintain an advantage while the rest of the field battle for position. Trisini led for most of the race with Rhule waiting for an opportunity to work past. On the final lap, Rhule made her move but Trisini fought it off, going on to take the checkered flag for his first victory of the season. Rhule settled for runner-up with Connor Zilisch (Energy) winning the battle for third over Chloe Chambers (Benik) and Logan Adams (Benik). 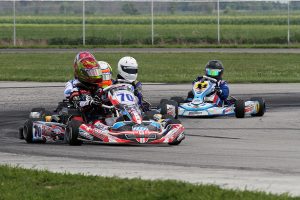 Anyone in the Allison Racing Engines Yamaha Sportsman field had the chance to win. For Sam Hinds, it was his turn. Most of the field ran together until five drivers broke away. Hinds (FA Kart) led with the Adams brothers Garrett (Energy) and Logan (FA Kart) working together. Double heat race winner Connor Zilisch (Energy) tried to break up the trio at the front, but could not stay ahead of them. Coming down to the finish, Hinds led with Garrett on his bumper. The two drag-raced to the line with Hinds able to reach the line first by nine thousandths of a second. Logan completed the podium with Chloe Chambers (Benik) able to take fourth away from Zilisch.

The CRP Racing Mini Swift also welcomed a first time winner with Ben Maier taking the victory. Four drivers battled for the lead position throughout the main event, all taking a turn at the point. Christian Miles (Formula K) appeared to be the quickest driver coming off the Heat #2 win with top qualifier and Heat #1 winner Mateo Rubio-Luengo (Benik) right there. Indy driver Elliot Cox (Energy) joined the fight with Maier emerging at the end of the race as the driver to beat. Coming to the checkered flag, Maier was able to edge out Mateo by eight thousandths of a second. Cox completed the podium in third with Miles ending up fourth. Danny Dyszelski (Benik) rounded out the top-five.

David Kalb Jr. went from zero to hero on the day in the Briggs 206 Senior division. Kalb (Eagle) was shuffled off the track in the opening heat race, placing 10th. Up front, three drivers each led a session with Zach Linsell (MGM) posting fast time in qualifying while Track Kart drivers Eric Fagan and Evan McCorquodale each took a heat race win. Kalb worked his way forward in Heat #2, placing third, helping to move him up on the main event grid. Kalb was the quickest kart on the circuit in the main event. Once joining the top three, Kalb worked his way to the point. Once there, he held the enough gap on the final circuit to cruise to the victory, his first on the year. Fagan drove to second with McCorquodale third. Linsell ended up fourth with Dustin DeMattia (Keener) placing fifth.