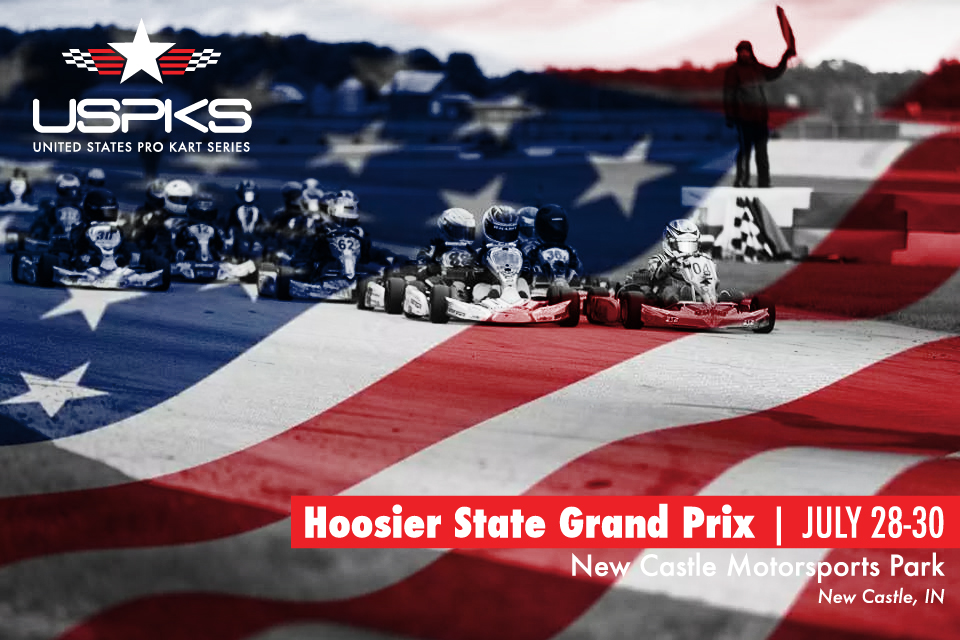 The United States Pro Kart Series (USPKS), presented by FIKSE Wheels and MG Tires, is busy preparing to take on the big track at New Castle Motorsports Park for the Hoosier State Grand Prix.  USPKS racers will head to the heart of Indiana, and the longest track on the 2017 schedule, in just two weeks, rolling into town on July 28-30 for a weekend of racing that will see some of the best sprint racers in the country.

The USPKS championship point leaders after the NCMP event, in X30 Pro, X30 Junior, and Mini Swift (X30 Mini*), will earn a ticket to their respective classes at the IAME International Final in LeMans France.  The prize package includes the race entry fee, race tires, engine/chassis rental, mechanic, and support for the event. The IAME International Final is very close to the USPKS finale of the season, so to allow the winners more time to prepare, the series is awarding the seats to the championship leaders after three events.

Brent Crews already locked in his entry-only ticket to X30 Mini at the IAME International Final via the Mini Swift category by being the overall weekend winner at Round Two in Pittsburgh.  If Crews goes on to be the championship leader after NCMP (secures the full ride ticket), then the seat will revert to the overall weekend winner at NCMP. If Crews is the championship leader and the weekend winner at NCMP, then the seat will go to whoever finishes second overall at New Castle. This is the first year for the Mini category at the IAME International Final and there are a total of only 34 seats available worldwide, making these spots prestigious around the world.

These four drivers who earn there spots to the IAME International Final through the United States Pro Kart Series will also become part of the Team IAME USA in Le Mans, France.

The Hoosier State Grand Prix at New Castle marks the third step toward securing those guaranteed starting spots on SuperSunday during the 2017 edition of the Superkarts! USA SuperNationals.  The champion in each of the five USPKS IAME-based classes will receive a paid entry, race tires, race fuel, AND a guaranteed starting spot in the main event on SuperSunday in Las Vegas this November.  The inaugural champion in the USPKS KA 100 class will have their choice of an entry to X30 Senior or X30 Master at the SuperNationals. The SKUSA SuperNationals is unquestionably the biggest and most prestigious karting event in North America, and the possibility of earning a guaranteed starting spot to the biggest stage in the karting world makes this package extremely valuable. (Drivers who confirm a ticket to the IAME International Finals in LeMans are not eligible for the SKUSA prize package).

In addition to these fantastic race opportunities, USPKS class champions and top finishers in all the IAME classes will receive IAME engines or parts packages.

Registration for the Hoosier State Grand Prix is now open on the series website (www.uspks.com) and will remain open until the week prior to the event.  USPKS is working with SKUSA to utilize the same track layout as they will be using the for their SummerNationals event on August 11-13.  This will ensure that USPKS supporters have every advantage possible if they choose to compete at the SummerNats.

eKartingNews.com Trackside Live will be broadcasting the New Castle event with Tim Koyen on the microphone calling the action, which is available at the www.ekartingnews.com/live webpage along with their social media updates and daily reports.