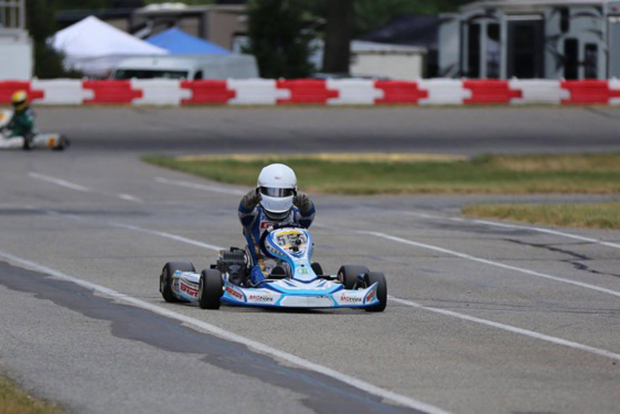 The Top Kart USA team continues their successful season with a full summer of racing. The team kicked off their busy summer with round two of the Route 66 series, June 16-18 at Michiana Raceway Park in Indiana. Following this event, the team pulled a double-duty race weekend, racing at round three of the Route 66 series at Mid-State Kart Club in Springfield, Illinois, and the USAC Karting Battle at the Brickyard at Indianapolis Motor Speedway, both taking place July 6-9. Between the three events, the squad added five pole positions, six wins, and fourteen podiums to their stacked 2017 resume.

“As we have reached the halfway point of the 2017 race season, the temperatures are rising, and our performance on track is continuing to rise as well,” comments Blake Deister. “We have been hard at work this past month, testing on and off the track, compiling data, and getting our chassis right where we want them for the next races on our schedule, the WKA Manufacturers Cup and SuperKarts! USA (SKUSA) SummerNationals at our home track, New Castle Motorsports Park.”

At round two of the Route 66 series in June, Kid Kart pilot Wyatt Kessinger brought home a second place finish on day one of the event, improving on day two to bring home the victory. In Yamaha Senior, three drivers flew the Top Kart USA flag. Alexander Kardashian took the win both days of the event, followed by teammate Dakota Pesek in the second spot, making it a front-row sweep for Top Kart. Carter Pease qualified in the top spot on day two in the senior class, earning his second pole position award of the season. Pease finished his day out with a fifth place finish in the final. Alexander Kardashian pulled double-duty for the weekend, also running in the X30 Senior class. He earned a solid fourth-place finish on day one, followed by a pole position qualifying effort on day two.

Round three of the Route 66 series brought more success for the team. Wyatt Kessinger was a powerful force once again, qualifying in the top spot in the Kid Kart category on day one. He finished off the day with a second place finish. Kessinger took another trip to the podium on day two with a third place finish in the final. Alexander Kardashian pulled double-duty once again in X30 Senior and Yamaha Senior. In X30 Senior, Kardashian snagged the pole position in qualifying on day one, and would finish off the day in the fourth spot. He improved on day two, driving himself to third place in the final and earning himself a spot on the podium. In Yamaha Senior, Kardashian landed himself on the pole once again. He was not able to hold onto the lead in the final and finished in the second spot. On day two, he found the extra speed he needed to secure the top spot, taking home the victory in the final.

The Battle at the Brickyard was a competitive event with large classes full of talented drivers. Dakota Pesek found himself on top at the prestigious Indianapolis Motor Speedway, scoring the victory in the Yamaha Senior Medium category. Kaden Wharff also took home the victory in the Yamaha Junior class, with teammate Timothy Steele following with a solid fourth place finish. In IAME Senior, Brandon Lemke drove his way through the field to a third place podium finish after starting from 21st. Abby McLaughlin followed in the fourth spot, a solid run for the senior driver. Kaden Wharff found himself on the track again in IAME Junior, finishing in the third spot and landing himself on the podium for the second time of the weekend.

“We are very pleased to see the hard work and dedication to the Top Kart brand pay off,” says Bill McLaughlin Jr. “Through the previous year of testing, testing, and more testing, we have been able to develop the Top Kart Twister (full size) chassis into a true performance racer that is extremely easy to tune. As we gear up to the rest of the season, we will continue to let our results do most of the talking.”