Inaugural Battle at the Brickyard Makes History for Sport of Karting 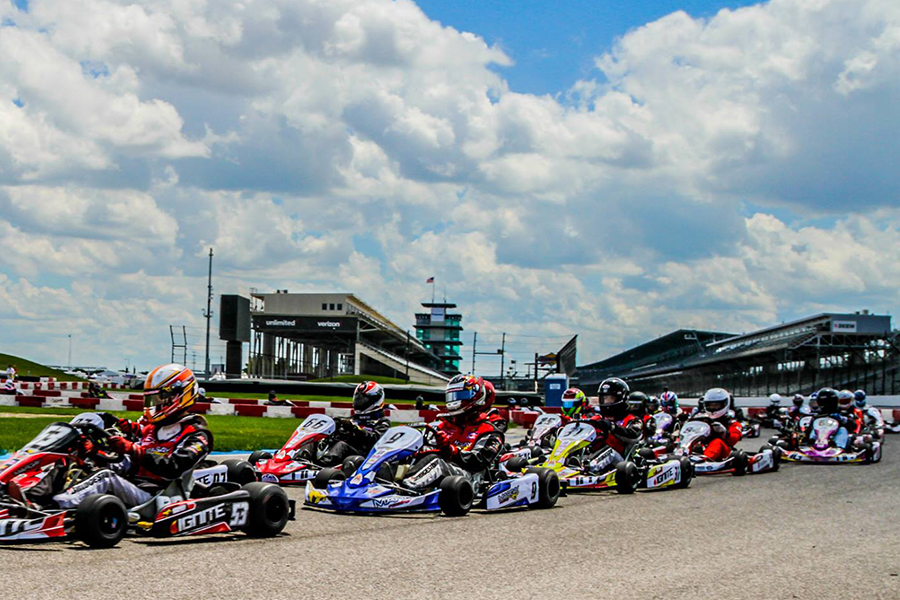 It is every racer’s dream to be able to cross the yard of bricks that sit on the start/finish line at the Indianapolis Motor Speedway. The sport made it one step closer to that dream with USAC Karting hosting the first ever Battle at the Brickyard inside the famed facility in Speedway, Indiana. The three-day event took part in the northern portion of IMS, utilizing portions of the Grand Prix circuit, Hulman Boluvard, and access roads to make up a course just over 1-mile in length.

Indianapolis Motor Speedway welcomed the karts with open arms, including President Doug Boles. Joined by NASCAR’s Chase Elliott, the two finished off a Brickyard 400 promotional tour throughout Indianapolis with a few laps around the Battle of the Brickyard circuit aboard two Margay Ignite karts. Boles even returned Saturday with his son Carter to join Margay owner Keith Freber for more laps, taking in the weekend as not just the IMS President, but a motorsports fan. 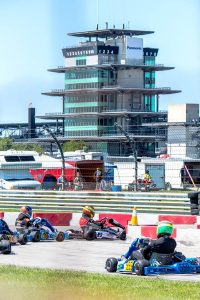 Karts hitting the Holman Blvd. hairpin with the IMS Pagoda in the background (Photo: Mike Alley)

The event was made up of three full days of action. Friday offered three rounds of practice for all 16 categories, making up 304 entries total. The opening day was scheduled to end with qualifying for all the categories. Rain storms blew in toward the end of the day, with only five classes able to get their sessions in before the weather forced the racing action to be cancelled for the rest of the day. USAC Karting moved the remaining qualifying sessions to Saturday morning, replacing the warm-up sessions. Once those were complete, each race group ran a heat race and Prefinal to decide the lineup for the Sunday main events. Aside from winning at the famous Indianapolis Motor Speedway, USAC Karting added a unique trophy for racers to earn. The USAC ‘Brick’ was handed out to the top-three in each division.

Taking home two Bricks was veteran racer Eric Jones. The KartSport North America / IAME USA East owner contested all three Briggs 206 categories, including Masters, Medium and Heavy. Jones was able to triumph in Medium and Heavy. The Medium victory was a 1-2 finish for Praga and KSNA with top TaG driver Brandon Jarsocrak placing runner-up, missing out by three hundredths of a second at the line. Keener Kart driver Dustin Demattia completed the podium. Jones won another close battle in the Heavy division, edging out Ryan Cassidy (Coyote) by six hundredths at the line. Cade Frazier (MGM) joined them on the podium in third. Cassidy was able to get the edge on Jones to kick off the main events, winning the battle in Briggs 206 Masters, which was the first class in the race order. It was a wire-to-wire victory for Cassidy, with Jones coming 82 thousandths short at the line. Jason Trennepohl (MGM) ran a close third.

Briggs & Stratton had a huge weekend in Indy. Alongside the karting event was the annual USAC 25 Battle at the Brickyard that takes place just behind the famous IMS Pagoda. In addition to the number of Briggs racers going around the small oval course, there were a total of 152 entries competing with the Briggs 206 engine package at the Battle of the Brickyard karting event. Briggs made up 50% of the total entries for the event, with a large portion coming from the Margay Ignite category. 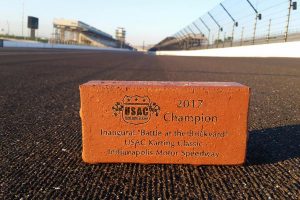 “206 Racers turned out in mass to put on a show from front to back,” stated David Klaus of Briggs & Stratton Racing. “The Margay Ignite tent was the largest I’ve ever seen in karting. Keith (Freber) has put together an incredible program. For racers to be able to show up, be part of a first class operation and support showed in the numbers. This event, if the recipe stays the same should be even bigger next year. I know of at least one more entry for next year, me!”

Forty-six drivers took part in the spec class promoted and developed by Margay Racing. The arrive-and-drive program along with Ignite owners all flocked to Indy for their chance of racing inside the Brickyard. The Margay Ignite class offered great racing with all different experience levels on the track at the same time. At the front end of the field, it was Canadian Charlotte Lalonde holding off Margay Hall of Fame driver ‘Pistol’ Pete Vetter by 33 thousandths of a second. Finishing third was Nick Todtenhaupt, who was the top qualifier, heat and Prefinal winner.

The quickest group of the event was the Honda CR125 Senior / KZ group. The Honda class was a battle of Indy drivers with Evan Batt (Sodi Kart) taking the victory Colton Aldridge (GP) and Jimmy Simpson (Sodi Kart). Kyle Kennedy (Intrepid) was able to notch the fastest lap of the weekend – 57.682 – during the main event. The KZ podium was a reunion of old SKUSA Great Lakes regional racers as Alex Conlin (Birel ART) beat Kurt Mathewson (TB Kart) and Eric Chappell (Birel ART). 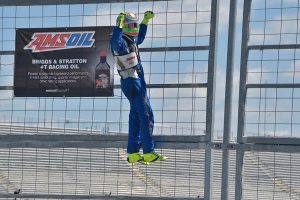 One of the most excited racers to be there and have the ability to score victory at the Brickyard was Stephen Flatt. The Praga driver from Georgia dominated the Honda CR125 Masters class over Tim Bannon and Tommy Plahitko. It was Flatt’s celebration that caught the attention of the paddock. Flatt began winning at IMS back in May 2006, when he asked his wife Lynette to marry him with the help of their favorite driver Helio Castroneves. His helmet from Mike Savage was inspired by the IMS history and caught the eye of IMS President Boles. After the victory, Flatt followed in the footsteps of Helio, and performed the ‘Spiderman’ celebration on the nearby fence. The climb preceded a drink and dousing of milk, along with kissing of the Brick trophy during the podium ceremonies.

“I can’t explain it but Indy has been a cornerstone in my life since I was about 6. I’m not sure what my infatuation has always been but it runs deep and it was just perfect. I did all the Indy things (fence, milk, kiss the bricks). I know its just a kart race but it was so much more than that for me. I got a chance to race where my heroes have raced and some have died.  I just love that place – it’s one of those that feel like a living entity. Doug Boles watched some of the celebration and thanked me for my enthusiasm and showing the younger groups how to do it which was super cool.  I would have never EVER dreamed of being able to say I raced within those four walls at Indy much less being able to say that I won there.  What a dream come true and definitely the highlight to my personal karting career.” 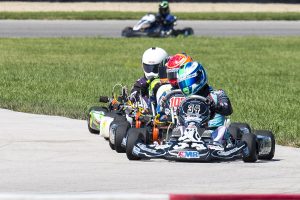 Rounding out the shifter categories was the Honda CR80 Senior division, a class that continues to grow in the SIRA program around the state of Indiana. With 20 drivers, they were all chasing Devon Smith Harden (TB Kart), who drove away to a seven-second advantage in the main event for the victory. Tyler Sawyers (GP) and Conor Bruce joined him on the podium.

It was a solid IAME Senior field of drivers with Brandon Jarsocrak the top driver all weekend long. ‘Money’ piloted his Praga to victory over fellow KartSport North America driver Jacob Donald (FA Kart) with Brandon Lemke (Top Kart) coming from 21st to third in the 14 laps. TaG Masters was a battle all race long between Glen Critchett (DR Kart) and Scott Falcone (Formula K). Critchett got the advantage at the end, scoring the Brick trophy over Falcone with Peter Cook (Tony Kart) in third. 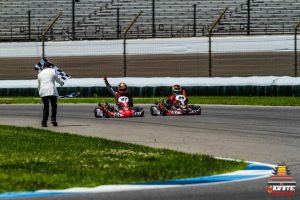 Three Junior categories gave youth the opportunity to race inside the hallowed grounds of Indianapolis Motor Speedway. Kaden Wharff (Top Kart) was the first Junior victor of the event, winning the Yamaha Junior division ahead of Spike Kohlbecker (Margay) and Andrew Bische (Tony Kart). Macon Moore led the field in the Briggs Junior category, leading by 10 seconds over Riley Scott and Camden Gruber. Wharff was the provisional winner in IAME Junior, until officials penalized him two positions for a driving infraction, handing the Brick to Spike Kohlbecker. Luca Mars (FA Kart) was promoted to second with Wharff classified third.

The inaugural Battle at the Brickyard made history, putting karts in competition inside the famed Indianapolis Motor Speedway. For USAC, it was a great first event for their venture into promoting karting. For the racers themselves, just being able to pull into the IMS facility with the trailer full of karting equipment alone was an achievement. Making laps on the portions of the same course that Formula One did from 2000-2007, and pitting in the famous turn three section where so many people have watched the 101 editions of the Indianapolis Motor Speedway.

From the outside looking in, this could become something big for the sport. The draw of Indy proved that the racers will come, just like we see with Daytona KartWeek and the SuperNationals in Las Vegas. Could this be the third leg of United States karting triple crown? Time will tell. For now, we celebrate those who took home the Brick.