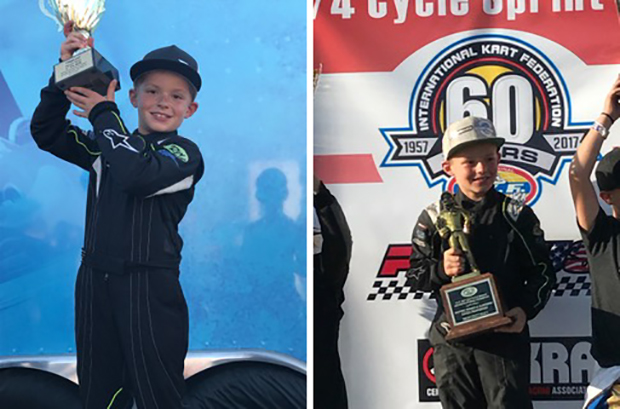 It was a perfect event this past weekend for Logan Toke at the Santa Maria Kart Track as he dominated the fourth round of the SuperKarts! USA (SKUSA) ProKart Challenge program. Taking place in Santa Maria, California, Toke proved that his practice speeds were no fluke as he went on to sweep the weekend’s competition putting his P1 Engines powered Top Kart on the top step of the podium.

“Logan drove great this weekend and is really coming into his own,” explained Michael Toke, father of the multi-time race winner. “We now are going to travel across the country and try our hand at some national level events. First stop will be the USPKS program at New Castle Motorsports Park.”

Fresh off his International Kart Federation (IKF) 2-Cycle Sprint Grand Nationals victory two weeks ago, Toke rode the wave of momentum into Santa Maria and was the driver to beat all weekend long. Claiming the pole position in qualifying and two heat race wins, Toke would score the inside front row starting position for the main event where he looked to get the job done.

Taking the green flag and slotting in at the front of the field, Logan drove fast and consistent race laps ashe drew away from his competitors. Taking the checkers over three seconds ahead of his rivals and scoring the fastest lap of the main event, the P1 Engines powered competitor celebrated on the podium later that afternoon. Following the conclusion of the event and the updated point standings, Logan Toke extended his SKUSA ProKart Challenge California IAME Micro Swift points lead with two event weekends remaining.

Success is not easy in the world of motorsports and Logan has a group of partners supporting him every step of the way. A special thank you to Horizon Tower LLC., RLV, SLO Fitness, NWM Advisors LLC., Cannon Power Group, Top Kart USA, PKS Kart Supplies and P1 Engines.

Next on the schedule for Logan Toke will be a trip to the Hoosier State as he will look to continue his recent success. Set to take on the New Castle Motorsports Park facility and the competition at the United States Pro Kart Series on the July 28-30 weekend, Toke is eager and excited to learn a new track as he continues to hone his skills and gain experience along the way.

For more information on Logan Toke or to become part of his racing program, please contact Micheal Toke at Michael@MJTAssoc.com.