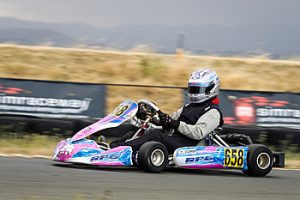 An Interesting weather day for the first race of the summer portion of the Sanzaru Games Karting Championships with the day starting out cool and breezy, then sunny by mid-day and ending with thunder and lightning all around by the end of racing and the trophy ceremony ending in a light rain shower. Over 70 drivers made up the field with 17 drivers making up the largest field of the year in Junior Rotax. The National Track configuration made for a fast race for the Featured Class, Rotax Masters, where veteran drivers hustled their karts around for a shot at winning the top prize of the day.

Southern California’s Billy Cleavelin took the pole ahead of 2016 champ Roman Alekseenkov and John Breidinger. In the first Pre-Main, Billy controlled the race from the drop of the flag with Roman close behind followed by John and Josh Buttafoco. The second Pre-Main was a repeat of the first with Billy taking the win, Roman 2nd, John 3rd and Josh 4th. In the Main, Billy again controlled the race from the front, but John and Josh put pressure on Roman pushing the 2016 champ back into 4th by the end of the race. Josh got by John to take 2nd, John coming home 3rd and Roman 4th. For the win, Billy earns a free race weekend package of free race entry, free practice and free transponder rental if needed, a $185 value. 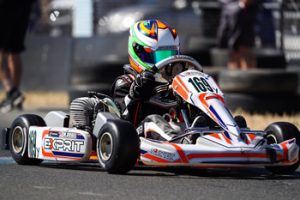 Nolan Siegal moved over from Mini Max where there has been only his entry in the past to run the Mini ROK for the rest of the year with the hope of more drivers running this new TaG class. Nolan swept all the races with Ayrton Tyler taking second. Word has it that there may be 2 or 3 more Mini ROKs running the next race.

The 250 class had the largest turn out of the year with the addition of new driver Jourdan Johnson not only making his first 250 class start, but also his first shifter race start. In Qualifying, the Electrics of Enzo Prevost and Jimmy Casey posted the top times with Austin Elliott in his 250 kart 3rd, Matt Cresci (Electric) 4th, then the two 250 karts of Ori Della Penna and Richard Hilleman. In the Pre-Main, the 250 karts started in front of the Electrics with a double green flag start separating the two groups of drivers by some 20 seconds. In the 250 race, Elliott quickly separated himself from the rest of the field and drove onto the win. Richard Stock worked his way through the field to come home 2nd, Della Penna 3rd. In the Electrics race, Prevost controlled the front with Casey and Cresci close behind, in the end, Prevost took the win, Cresci getting by Casey for 2nd and Casey 3rd. The second Pre-Main was a duplicate of the first race with the results for the top 3 positions being the same as Race #1. In the Main, Elliott again took control of the race from the drop of the green and drove on to an 8 second win, Stock coming home 2nd, Della Penna 3rd and Johnson 4th. In the Electrics race, Prevost lead the field out of turn one with Mason Cohen working his way into 2nd. Casey and Cresci were not able to generate the speed to stay with Prevost/Cohen and had to settle for 3rd and 4th. Honda Bucks were awarded to the top three 250 drivers in the amounts of $100/$70/$40. 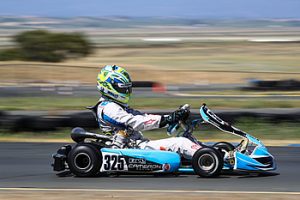 In Qualifying, Enzo Prevost (Sr) took the pole ahead of Aaron Farris (Mas), William Ferguson (Jr) and Bryson Lew (Jr). In the first Pre-Main, Prevost lead the field to the checker in the 8 lap race, Farris 2nd, Lew getting the best of Ferguson on the start to take the win in Junior, Ferguson 4th and Christopher Martin (Jr) 5th. In the second Pre-Main, it was a repeat of the first race with Prevost again the winner, Farris 2nd, Lew 3rd, Ferguson 4th and Clayton Ketcher (Jr) 5th. In the Main, Prevost and Farris pulled away from the Junior karts and took 1-2 and winning their respective classes. The Junior race turned into a close one with Martin getting right onto Lew’s tail and challenging him for the entire 15 lap race. But in the end, Martin could not find the way around and had to settle for the runner up spot. Lew took the win in Junior TaG, Martin 2nd and Ferguson 3rd.

There would be 9 drivers to start the race with 2 additional drivers out due to mechanical issues, 80 Masters looked to be a great race. Charles Hastings qualified a full 1+ second ahead of the rest of the drivers Tom Nelson, Dave Holstein, Stephan Gaudreau and Roger Cornwall following in that order. In PreMain 1 Hasting took the lead with Nelson and Holstein to follow. Gaudreau unable to start due to mechanical issues would bump Geoff Provo ahead at the start. James Kim, a relief driver jumped into Geoff Provo’s extra kart but unfortunately spun out 5 laps into the race unable to restart. Bryan Devert passed Allen Miller with 2 laps to go fighting against coming in last. Hasting would finish 1st, Nelson 2nd and Holstein 3rd. PreMain 2 The class would start with Hasting, Nelson and Holstein to run consecutively throughout the race. Allen Miller would gradually pass the remainder of the field to place 4th with Gaudreau racing right behind him. 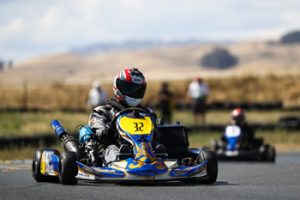 Great race for the Main. Charles Hastings would take a huge lead almost immediately. A great job considering that he experienced problems in Race #3. Nelson, Holstein and Gaudreau would battle the race for placement behind him. Two laps in Nelson spun out, restarted but dropped back to last place. This would bring Allen Miller into the picture. Gaudreau and Holstein kept positioning back and forth with Miller waiting to step in. It was Gaudreau, Miller and Holstein at halfway. Gaudreau starting to stretch the lead for 2nd but Miller caught him and slipped by at turn one. Gaudreau passed back at Laguna but Miller passed back one lap later. Then Gaudreau would look behind him and got passed by Holstein. Holstein would race to catch Miller for 2nd place but to no avail. At the checkered it was Charles Hastings with a good 6+ seconds ahead of Allen Miller in 2nd, Dave Holstein in 3rd and Stephan Gaudreau would round out with the 4th place finish. Honda Bucks to be awarded to the top three in the amounts of $60/$40/$20. 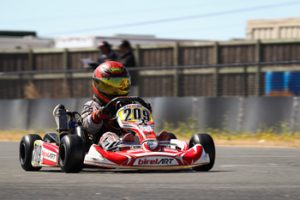 Ayrton Tyler took his first pole ahead of Ryan Persing and Adam Freire. In the first Pre-Main, Ryan’s experience allowed him to get through turn one first with Tyler dropping to 4th. Tyson Quach worked his way up into 2nd with Ayrton working back into 3rd. In the end, Ryan took the win, Tyson 2nd, Ayrton 3rd and Harrison Marsh 4th. In the second Pre-Main, again Ryan got into and out of turn one first with Tyson again working his way into an early 2nd place with Ayrton close behind. Tyson and Ayrton pressed Ryan the entire way, but in the end, Ryan came home 1st, Tyson 2nd, Ayrton 3rd and Adam 4th. In the Main, Tyson lost one of his side pods and had to pit on the formation lap and out of the race. Ryan controlled the start from the pole position but was hounded by Ayrton all the way. Ayrton looked for several ways around Ryan, especially on the straightaway, but just could not time a safe pass. Behind the leading duo, Adam Freire was being challenged by Derek Domingos for 3rd place. Near the end, Derek was able to make the pass with Adam looking for a way to retake the position. In the end, Ryan held on for a slim win, Ayrton 2nd less than a tenth of a second back, Derek came home 3rd, his first podium finish in the Series, Adam 4th and Harrison 5th. 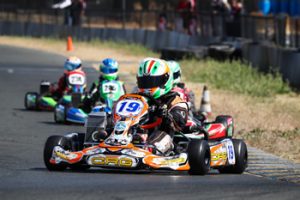 17 drivers showed up to race, the largest turn out of the year. William Ferguson took the pole, his second pole of the day, followed by Aiden O’Neill and Bryson Lew. In the first Pre-Main, Ferguson got of the acceleration line a bit slow and O’Neill was able to get into and out of turn one first. Brendan Stammer worked his way up to get into the 2nd spot with Lew and then Clayton Williams getting past Ferguson to take over 3rd and 4th. In the end, O’Neill took the win, Stammer 2nd, Lew 3rd and Williams 4th. In the second Pre-Main, O’Neill and Lew go by Ferguson on the start, then Grant Langon and Stammer get by Ferguson. In the end, O’Neill took his second win, Lew 2nd, Langon 3rd and Stammer 4th. In the Main, O’Neill lead the field out of turn one with Lew close behind. Langon, Nick Persing and Ferguson all pressured Lew the entire race and one by one were able to get by. Langon then put down some fast laps and started to reel in O’Neill, but time ran out with O’Neill taking the checked flag just 2 tenths of a second in front of Langon, Nick Persing 3rd, Ferguson making a good rebound from the Pre-Mains to take 4th and Lew 5th. This was Aiden’s third win a row for the season and putting him in the lead for the championship. 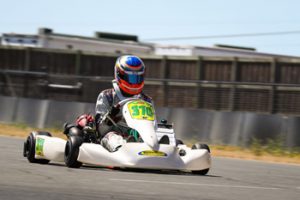 In Qualifying, Alex Keyes (Sr ROK) took the pole ahead of Kyle Loh (Pro Stock) and Patrick O’Neill Stock Masters). In the first Pre-Main, Keyes took the early lead and pulled away to a comfortable win. Zach Pettinicchi got the jump on Loh at the start and held on to win the Pro Stock win. In the Masters group, O’Neill took the early lead and held off Kevin Woods (Stock Masters) and Jeff Smith (ROK Masters) to take the Masters win. In the second Pre-Main, Keyes drove off to the overall win again, Loh took the early lead held off Pettinicchi for the Pro Stock win while O’Neill again took the Masters win. In the Main, Keyes lead the way for the overall win, Pettinicchi got the best of Loh to take the Pro Stock win and O’Neill made it a clean sweep by taking the Masters win. Honda Bucks were awarded to the top two drivers in Pro Stock and Stock Masters of $75 and $40. 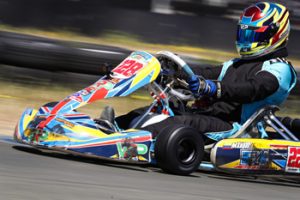 Zia Harvey took the pole ahead of Alejandro Marquez and Eric Huang. Marquez lead the field out of turn one after the green flag and held off Harvey to take the win in Pre-Main #1. The second Pre-Main was a repeat of the first one. In the Main, Marquez lead Harvey out of turn one with Harvey right on his heels the entire way looking for a way by or a mistake by the leader. In the end, Marquez made no mistakes and came home the winner, Harvey about a half second back and Eric Huang right on Harvey’s heels as he posted the races fastest lap.

The next race will be July 16 where the track configuration will be the Reverse Sprint Track and the Feature class will be the EVO Electrics. Kid Karts will run at Race #5 as part of the Saturday program.