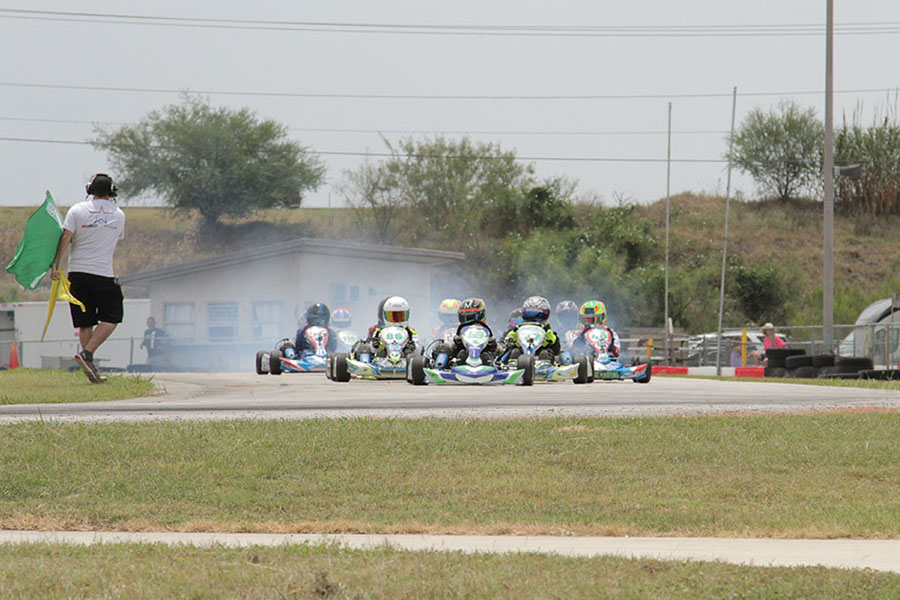 The third event of the year for the Texas Sprint Racing Series (TSRS) presented by TYCA Karting and EVINCO Tires was held on June 24-25 at Hill Country Kart Club (HCKC) in New Braunfels, Texas. The event continues to prove the series growth from 2016 with 65 entries in both the two-stroke and four-stroke classes, an increase from previous years. Once again, the Texas Sprint Race Series had a stellar LO206, TaG Cadet and TaG Junior field, along with the LO206 Cadet, World Formula Pro, TaG Lite and Shifter Light, all providing very close and exciting racing around the challenging .5-mile layout.

The World Formula Pro Heavy class sponsored by Fast Auto Transport was a close battle all weekend.  Jean Michel Gaston (Alpha Karts USA /Alpha Exos) took the pole position in qualifying. In the heats, Gaston took the win in heats one and three with Mark Cresswell (Trackside Karting / Comp Kart) taking the win in heat two. In the main event, the race belonged to Gaston who started on the pole position and took home the overall win. Cresswell fought hard but ended up second with BJ Hodge (Rpm RaceKarts / CRG) in third.

The LO206 Senior Light Class, sponsored by Margay Racing, again had very tough competition throughout the weekend, with the out-of-town and home town racers fighting for the top positions.  The LO206 Light qualifying started off with local area racer and current points leader Riley Dickinson (Texas Karts / Intrepid) taking the pole position, HCKC Racer Taylor Ross (Comet Kart) claimed P2 and Louisiana’s own Shane Burkett (Coyote) securing the third position. Dickinson showed he was the kart to beat all weekend by taking the win in all three heat races with Taylor Ross finishing a consistent second in each. Casey Ross, Tommy Muth, Shane Burkett and Greg LaCoste all had excellent runs throughout their heat races as well. In the main Riley Dickinson would take the early lead, with the rest of the field battling for positions. Shane Burkett showed he was not to be denied and chased down Dickinson, made the pass and never looked back. Burkett crossed the line for the win with Dickinson second and Casey Ross third. TSRS is proud to have such a very high level of competition in the LO206 classes and these guys can compete anywhere in the country. Race four will be at SpeedSportz Race Park in Houston, Texas and it will be the biggest four-stroke event in the state. The Texas Sprint Racing Series welcomes any teams and drivers who want to compete against the best to come join the fun.

The LO206 Cadet class sponsored by LiMi Makeup provided great driving by the young field. The LO206 Cadet class saw a new series entrant shake up the field this weekend. HCKC local racer Carson Garvish (Trackside Karting / Comp Kart) showed he was the kart to beat once the race began.  Garvish took the pole in qualifying and won two of the three heat races. Regan Saville (Merlin) paced Garvish all weekend but in the end Garvish came out on top with the win. In the main event Garvish took the checkers, Saville second and James Moss (Alpha Karts USA) took his first ever podium finishing in the third position.Moss was consistent all weekend and is getting better every race he enters. Jerry (Bubbie) Rhodes (Rpm RaceKarts /Margay) continued his consistency but a mistake in the main would put him back to fourth when the checkered flag flew. Newcomer Orry Adrian secured a top-five result in fifth in his first ever regional series event. The LO206 Class is very exciting and growing class that is a perfect place for kids age 8-12 to learn karting skills at an affordable cost.

The TaG Cadet class sponsored by Wilson Fire Equipment had a solid twelve kart field for the weekend. In qualifying, Chase Gardner (Vemme) took the pole with Hailey Taylor (Trackside Karting / Comp Kart) second and Caiden Mitchell (Sodi Kart) third.  In heat one, Mitchell would take the win followed by Chase Gardner and Ryan Shehan (Trackside Karting / Comp Kart). In heat two, Gardner claimed the victory with Shehan in second and Taylor in third.  In heat three, Gardner secured another heat race win with Alex Stanfield (Energy / Core Karting) second and Taylor in third. The 20 lap main event had six drivers capable of winning. When the checkered flag dropped, it would be Gardner taking the win with Shehan on the podium in second and Mckenzie Cresswell (Trackside Karting / Comp Kart) in third. Stanfield and Taylor would round out the top-five in fourth and fifth.

The TaG Junior Class sponsored by Trackside Karting Services showed strong racing all weekend with eight deserving drivers going for the top step. Local driver Ethan Arndt (Trackside Karting / Comp Kart) would take the pole in qualifying with fellow local racer Ethan Foxworth (Intrepid) in second followed closely by Kaden Gray (CRG/Core Karting) in third.  Heat one showed that Arndt, Foxworth and Gray would finish as they qualified, while in heat two, Arndt took the win with Gray in second and Jett Morton (Alpha Karts USA) in third. The third and final heat would see Arndt again as the winner, with Morton jumping to second and Travis Wiley taking the third position.  The twenty lap main event saw Arndt dominate the race weekend and take the victory. Morton would end his event in the second position while Wiley rounded out the podium in P3. Adrian Cruz (Sodi Kart) secured the fourth position while Ethan Foxworth came home fifth.

TaG Light sponsored by CRG Nordam had a smaller field but still had some great racing. Local racer Dough Foxworth (Intrepid) would take the pole position in qualifying with John Berry (Alpha Karts USA) second, and Miguel Mier (Sodi Kart) in third. Heat one would see Berry take the win with Mier close in second in second and Carlos Cantu (Birel) in third. The second heat would see Berry taking another heat race victory with Foxworth second and Mier in third. Foxworth would flex his muscles in heat three taking the checkers. Cantu would end his heat three in P2 while Mier added another third place result. The twenty lap final saw Berry take the win for Alpha Karts as Foxworth, Cantu and Mier all battled for the final two steps on the podium. In the end Mier would get by Cantu and Foxworth due to contact between the latter two. Mier would stand on the second step of the podium while Cantu recovered for the third and final podium position. Foxworth crossed the stripe in fourth but following the on track incident, was awarded the third position due to a driving penalty against Cantu.

The Alpha Karts USA Shifter Light class brought some of the most exciting racing of the weekend with a solid nine kart Field. Local racer Brady Ross (Sodi Kart) took the pole position in qualifying with Blair Hosie (Alpha Karts USA) in second and Mark Snyder (FK Kart / Core Karting) in third. Heat one would see Ross take the win, while Riley Dickinson (Sodi Kart) drove from ninth to second and Mark Snyder ended in the third position. Heat two would see another victory for Ross with Hosie in second and Dickinson in third. The third and final heat on the day would see Ross take his third heat race win with Hosie and Dickinson in second and third respectively. The twenty lap final saw a great race by the Sodi and Alpha Kart drivers and in the end Dickinson would top the blocks with the win. Hosie would remain consistent with a second place finish while Ross, Snyder and Carson Mueller (CRG / Rpm RaceKarts) would all finish in the top five.

Race four, the final race of the season and championship, will be held at the newly-completed SpeedSportz Racing Complex in New Caney, Texas, on September 30 and October 1.