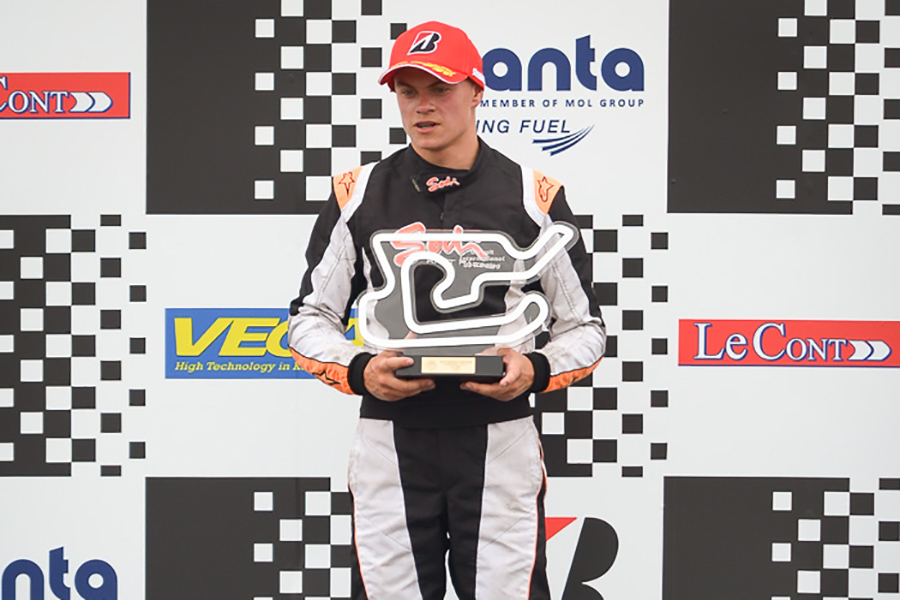 Extremely competitive, the second event of the European KZ2 Championship which took place at Le Mans further expanded the success of Sodikart with the CPB Sport team. In addition to the superb 2nd place on the final podium taken by Rokas Bacisuka, the other performances by the French brand allowed it to be the best represented of all in terms of results.

With seven out of eight drivers in the Final and three in the top seven, Sodikart clearly outpaced its rivals. Five fastest laps in the race, including the Final, demonstrated the effectiveness of the French chassis in all conditions. The work of Paul Bizalion’s CPB Sport team has brought great rewards, while the collaboration with TM Racing and its various tuners is growing.

Baciuska the hero of Le Mans

The Lithuanian Rokas Baciuska had never before achieved such a flattering result and his clear joy was great to see on the podium. 12th in Qualifying, Baciuska increased the pace in the heats to reach 5th position. He completed a magnificent Final by returning to the top three at halfway and took second place on the last lap. Baciuska has therefore jumped from 9th to 5th place in the provisional ranking of the European Championship.

The Italian driver Alessandro Irlando did not have an easy task at Le Mans. After setting the 7th time, he found himself 19th for the Qualifying Heats after the mixing of the groups due to the significant differences between them. He then drove three beautiful heats, but lost a bit of time in a fight in another. Starting from 12th place on the starting grid of the Final, Alex made the effort to regain ground and finally reached the top five. Although he probably hoped to do better, he kept all his chances in the Championship and is tied for 2nd.

The changing conditions of Qualifying played a bad hand for Tom Leuillet. The gamble to go out on rain tyres was not good at a time when the track began to dry very quickly. Tom had to face the difficult challenge of climbing back into the pack from 59th. He fully utilised the potential of his Sodi / TM and was already back in 13th place after the heats. By continuing to avoid all the pitfalls of racing, Tom ended up reaching 7th place on the finish line. His unbelievable 52-place recovery allowed him to not lose too many points in the Championship, where he is still ranked 6th.

Renaudin on the rise

Adrien Renaudin is more and more consistent as his first international KZ2 season continues. He first impressed with his relentless progression in the heats, from 26th to 8th position despite a spoiler penalty. Pushed off the track on lap 1 of the Final, he continued to fight from the back of the pack and managed to climb to the edge of the top 10.

Paul Fontaine, who was a less well-known driver until then, felt his wings grow during his timed session. With the fastest time in his group, he took 2nd place in the overall standings. Filled with a new confidence, Fontaine kept up the rhythm in the heats, and he was in 3rd place in the intermediate standings. Although the Final was more complicated, he nevertheless finished the meeting in 14th position.

The exceptional results obtained in KZ2 by Sodikart and the CPB Sport team back up the excellent performances of the factory drivers in KZ. The enthusiasm for the Sodi chassis is continuing to grow in many countries.

The European KZ2 Championship will conclude at the end of July in Sweden with real possibilities of victory for the French brand.