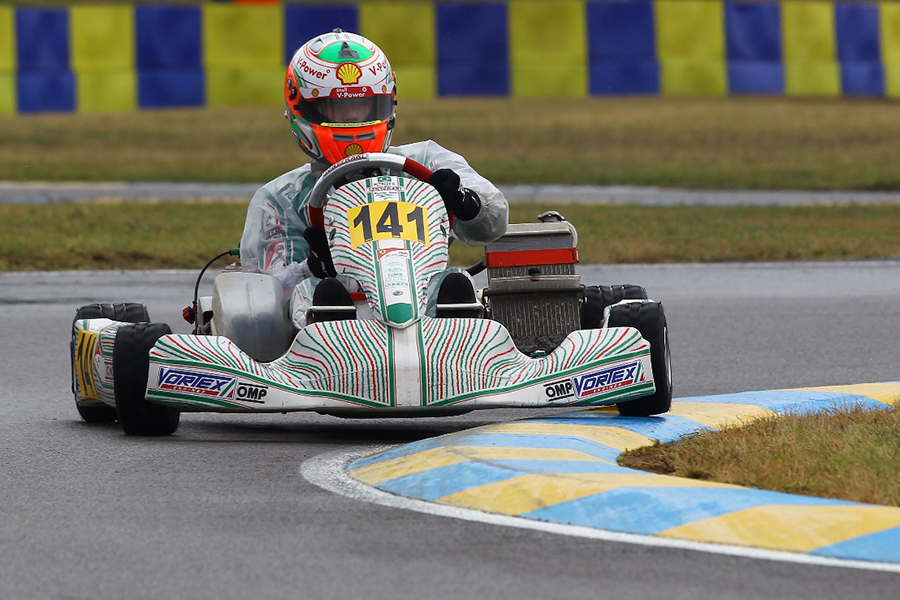 Except for the exciting rounds before Le Mans, in France we did not collect good scores. We still hold the top of the OK ranking with Vidales and we are always in the fight for the KZ2 title with Viganò.

KZ2: After a significant performance to the final, with two victories in the heats, Matteo Viganò led a very good final. Our driver at the wheel of his formidable Racer 401 S powered by Vortex was impeccable and took the lead of the race from the third lap already, detaching the rivals out of reach. One lap to the end, when he had a gap of more than a second on the first chaser, Viganò had to stop for a technical problem, while our other driver in the final, Alessio Piccini, easily ended in the top ten, eighth place. Despite the unlucky stop, Matteo remains in full fight for the title, with the fourth position.

OK: Some adverse events affected the performance of some of our drivers, preventing them from expressing themselves to the best. On the other hand, Gianluca Petecof, was the best performer of group-1 in the qualifying. Our Brazilian driver managed to enter directly in the final, winning more scores in the European standing, as he had already done in Spain. On the continental podium, there was the English Kenneally (Baby Race srl) at the wheel of a Tony Kart-Vortex, once more proving the quality of our products. David Vidales, despite a challenging weekend, remains at the top of the standings, and Hiltbrand, also outside the scoring area, is not far from the top positions and is still within those who can win the title. In the next two rounds, in Finland and Sweden, our drivers will be called to perform a recovery.

OKJ: In the cadet class Viktor Gustafsson finished the heats at ninth place and led the first part of the final with determination, reaching the fifth position. Unfortunately, a collision stopped his race too early. OKJ, like OK, is one of the categories where our chassis are the most numerous. In fact, not less than 30% of drivers at the starting grid chose Tony Kart for the continental challenge.