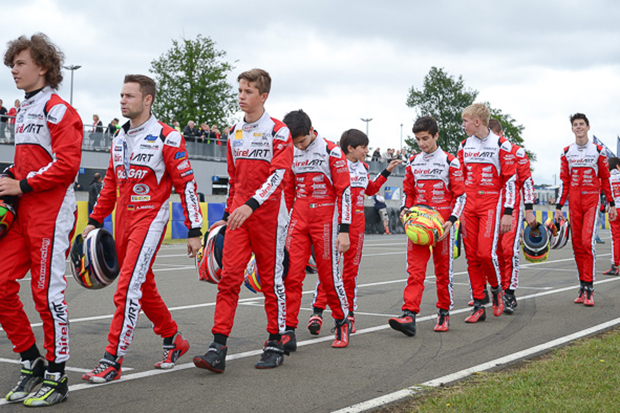 The second meeting of the European KZ2 Championship and third round of the OK / OK-Junior European Championships, the Le Mans meeting far from fulfilled the expectations of the Birel ART Racing Team. After Qualifying Practices disturbed by intermittent showers, the severity of the clashes in the races caused disaster for many drivers, including those of the Italian brand. However, the technical progress made since the beginning of the season cannot to be questioned as shown by the good performances achieved despite everything in the three categories.

The Le Mans circuit proved formidable for many of the favourites of European competition. Sportingly very interesting, the French track provoked extreme behaviours in some competitors and the running of the races was accompanied by an unusual passion, which caused a lot of damage.

After the lottery of Qualifying in which the 101% rule had to be applied to compensate for the time differences between the different groups, the Qualifying Heats were extremely intense. The Birel ART Racing Team drivers were not been spared the many racing incidents leading to more retirements than usual. An impressive amount of penalties, mostly for incorrectly positioned spoilers, also affected the results on multiple occasions.

In OK, only Caio Collet managed join the game. He set the 10th fastest time, but was ranked 17th overall after the 101% rule. Caio was able to negotiate the Qualifying Heats without too much worry as he qualified in 14th position for the Final. While he was on the pace and likely to improve his situation, the Brazilian driver had to retire before mid-race. The best chance for a result for Birel ART’s had flown away. Rasmus Lindh (Ricciardo Kart) and Michael D’Orlando were able to compete in terms of pure performance, but many setbacks deprived them of access to the Final. For their first races of the season in OK, Archie Tillett (Ricciardo Kart) and Manaf Hijjawi were not able to move up from a long way back in the heats.

In OK-Junior, the best surprise came from the young Sebastian Montoya who achieved an excellent fifth time of his group in Qualifying, which placed him 15th overall. He brushed the top 10 in a heat, but a retirement and two spoiler penalties prevented him from qualifying. After 17th in Qualifying, Anthony Famularo found himself 46th after the mixing of the groups. Two good heats were not enough to compensate for two penalties and one retirement. He narrowly missed his place in the Final. Alessandro Famularo and Jose Antonio Gomez Gutierrez’s progress was difficult, punctuated by several setbacks.

Alexander Dahlberg started off well in 21st place in Qualifying and finished three beautiful heats. An incident at the start of the AB heat increased his score, but he nevertheless qualified 23rd for the Final in which he unfortunately did not complete the first lap. Riccardo Longhi was going wellin the heats despite his 17th in Qualifying. But a spoiler penalty cost him his qualification for the Final. Abdullah Al Rawahi and Filippo Berto met too many pitfalls in their heats to catch up after Qualifying Practice.

Despite the disappointment of this unique weekend, the Birel ART Racing team has not lost confidence in its potential, which has progressed well since the beginning of the season. The two European competitions still to be contested in July will provide them with the opportunity to shine again.