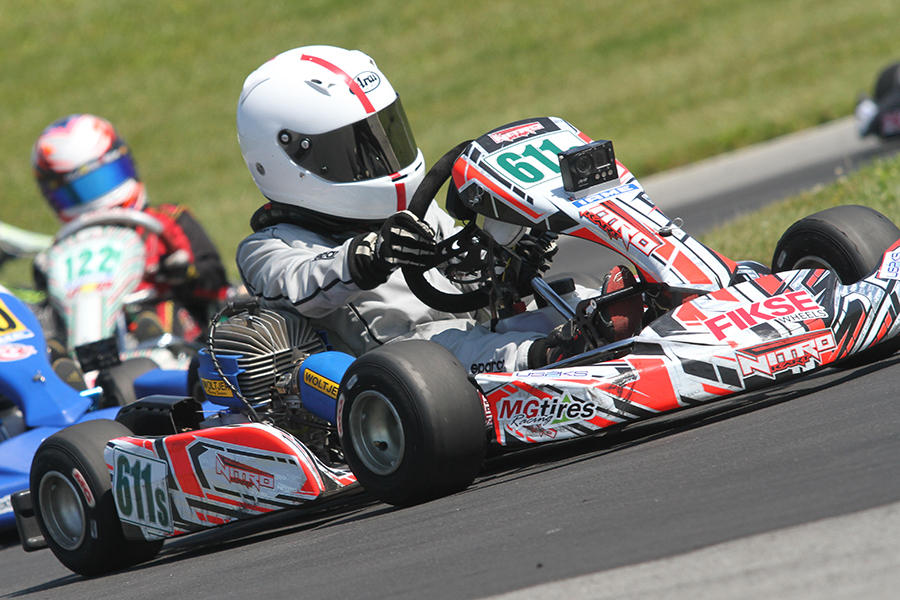 There are many aspirations as a karter. At the club level, it could be just finishing a race or making the podium. For those at the regional level, it may be securing a couple wins at tracks that you don’t call home. National level drivers it is about getting those major victories and championships. International karting is a level many of us in the sport will not be able to experience. Of course, the CIK European and World events feature the best of the best. Now with the Rotax Grand Finals and the IAME International Final, more opportunities exist for racers all over the world, including the United States. Nitro Kart driver Brent Crews has earned a spot to compete in two of them in 2017, all in the span of three weeks.

Crews won in both the dry and wet at the USPKS Pittsburgh event to earn the IAME International Final entry at Le Mans (Photo: EKN)

Crews opened up the month of June at the United States Pro Kart Series event at the Pittsburgh International Race Complex. Crews, the 2016 USPKS IAME Rookie champion, entered the weekend leading the championship standings following two runner-up results at the opening event in Mooresville, North Carolina. The weekend in Wampum, PA was special, as USPKS was awarding the overall weekend winner an entry into the IAME International Final in Le Mans, France this October. Crews started the opening round on the weekend qualifying sixth, placing fourth in the opening heat with a third in the second moto. That boosted him to third on the starting grid for the main event. Crews joined fast qualifier and double-heat winner Connor Zilisch and Nicholas Terlecki at the front of the field, battling for the win. Crews and Zilisch worked to the top-two positions, setting up for a last lap battle. A red flag came out during the 14th and final lap, thus reverting the results back to lap 13, with Crews taking the victory. Zilisch, however, came out of the day with the weekend point lead with Crews trailing by 13 points.

Qualifying was not the session Crews hoped for, ending up 10th in the order. A 12-lap Prefinal allowed the Nitro Kart driver to work his way forward, reaching the lead pack and coming just 67 thousandths short of the race win in the third position. Crews did record the fast lap of the race. At lunch, the clouds dropped rain on the facility and continued to fall through all the main events. No stranger to rain, Crews stepped up to the plate and dominated the 16-lap Final. From lap one, Crews led every circuit, pulling out to a 1.1-second advantage for his first USPKS victory of the season. The win gave Crews enough points to leap over Zilisch for the weekend total and the entry to the IAME International Final. 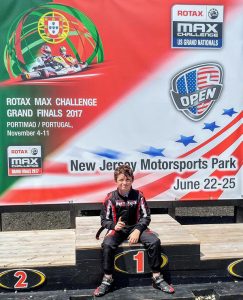 Three weeks later, it was back north for the Denver, North Carolina driver has he ventured to the New Jersey Motorsports Park for the US Open / US Rotax Grand Nationals event on June 22-25. The last major Rotax event in the United States for 2017 handed out a total of 12 tickets to the prestigous Rotax Grand Finals, set for Portugal this November. Two were available in the Micro Max division with the nine-year-old among the 21 drivers racing. Crews came 64 thousandths short of the fast time in qualifying, losing out to Sam Avrutsky.

Brent jumped out to the lead in the opening heat race, leading all eight laps for the win, repeating the same path in Heat #2. James Egozi challenged in Heat #3, taking the lead until the final lap with Crews jumping back ahead and taking the checkered flag first. Officials however penalized Crews 10 seconds for jumping the start, dropping him down to 12th in the order. Brent bounced back in the Prefinal, leading 10 of the 11 laps for the race win. From there, it was clear sailing to Portugal as Crews led all 14 laps of the Final to clinch his first US Rotax Grand Nationals title, also giving Nitro Kart its first national title.

Crews is scheduled to compete at the upcoming New Castle triple, with the WKA Manufacturers Cup Series on July 14-16, the United States Pro Kart Series on July 28-30 where Crews leads the Mini Swift standings, and the SKUSA Pro Tour SummerNationals on August 11-13. Brent is busy at home, racing his dirt Outlaw Kart two or three Wednesday’s a month with a possible trip out to California on the docket for this summer. Brent is also the top points earner in the Briggs & Stratton Weekly Racing Series Junior standings through the month of June, racing at the GoPro Motorplex series. 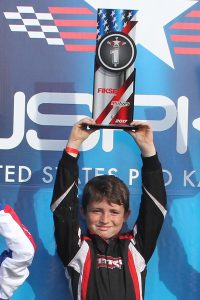 Chassis: Nitro Kart
Sponsors: Nitro Kart, Cadet Technologies Group, and Empire Roofing
Series You Compete In: USPKS, ROTAX, SKUSA, FWT, WKA Man Cup, GoPro Karting Challenge, Millbridge Speedway Outlaw Karts
Years Karting: 2.5 I think
How did you get started in karting? GoPro Motorplex opened and we got a kid kart.
What has been the high point in your racing career? Winning these tickets has been cool but the next race is always my favorite.
What are your goals in racing? To get better every time I go to the track.
In a few words, how would you describe your driving style? Win it or bin it!
Funniest moment at the race track? Someone on the Nitro team is always doing something crazy but a few weeks ago at our kart camp at CMP I tried to take a cut through on the last lap of one of the races and it was a HUGE fail.

What do you do when not at the track? Homework, helping with my little brothers.
What are your goals outside of karting? To make it through school.
What app or game do you play a lot of right now? iRacing, Kart racing pro
What type of street car would you like to drive? A jalopy pickup truck with a huge motor
What are your pet peeves or things that irritate you? Homework and losing
What do you think could be done to improve the sport of karting? More races on TV would be great.
What are your favorite aspects about the sport of karting? Me vs. everyone else.