The second round of the Route 66 Series took place this last weekend at Michiana Raceway Park outside of South Bend, Indiana and the Comet Racing Engines Team was on hand for customer support all weekend. It was a great weekend for Comet Racing Engines with 10 overall victories, including sweeping X30 Senior, X30 Junior, Yamaha Cadet and Yamaha Junior both days!

In Yamaha Junior Zach Pretorious took the pole on Saturday with James Lynch sharing the front row in 2nd. Zach would take victory in the final with Comet Racing Engines sweeping the top three spots with Matthew Mockabee and James Lynch joining him on the podium. JJ Hansen was 8th. 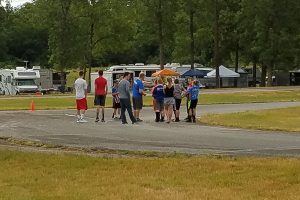 Sunday Colby Horn would win the pole in Yamaha Junior. In the final Horn would run in the lead pack for most of the race until an off track excursion moved him to mid-pack. Zach Pretorious would complete the sweep of the class winning the final again on Sunday! Matthew Mockabee was 2nd, Lynch 5th, Hansen 6th, Bryce Aron 8th, Horn 9th and Brennan Hanville 10th.

Tahlon Yockel had a great weekend in X30 Junior starting with a pole on Saturday, taking the Prefinal win and walking away with the victory in the final! James Lynch was 6th and Mockabee 7th.

Sunday was a tougher start for Yockel after not getting a single lap in qualifying due to a mechanical problem. Kaden Wharff would go P1 in Sunday qualifying with his Comet Racing Engine X30. Yockel started on the rear in the prefinal and drove through the pack to finish second. In the final it was all Yockel, getting into the lead early and cruising to his second win in the X30 Junior class of the weekend! Wharff would cross the line in 6th and Aiden Harrington in 7th.

Sunday Christian Miles won the pole with Comet Racing Engines sweeping the top 3 spots in qualifying! In the final Miles and Garrett Adams would spar for the win on the last lap with Miles edging Garrett out to earn his first win in the Yamaha Cadet class with Route 66! Adam Maxwell would cross the line in 4th, Elysiah Navarro was 7th, Logan Adams came back from an early race incident to finish 8th, Cade Pretorious in 9th and Alex Grapsas 10th with the fastest race lap before a bent tie rod slowed his pace.

Hunter Pruitt had a strong weekend in the Yamaha Rookie class earning the pole both Saturday and Sunday! Saturday Hunter would take the victory in the class with the fast lap of the race! Sunday Hunter would come through the pack and pick up multiple positions to narrowly miss the win with a second place finish.

The Swift class continues to be a hotly contested affair. Logan Adams took his second victory of the season in the class on Saturday with Sam Hinds in 3rd, Garrett Adams 4th, Alex Grapsas 7th, Adam Maxwell 8th, Cameron Christ 9th and Pierce Sonderup in 11th. Sunday would see Logan again racing for the win only to come up short with a duel on the last lap to cross the stripe in 2nd. Garrett Adams was 3rd, Adam Maxwell 6th, Alex Grapsas 7th, Cameron Christ 9th and Sonderup in 12th.

In Micro Swift Hunter Pruitt was looking to win for the second time on Saturday after his victory earlier in the day in the Yamaha Rookie class. Hunter came from 2 seconds back to catch the leader but had to settle for second and the fast lap of the race. Sunday Hunter was in 3rd with a corner to go when a chain break ended his run yards from the finish line.

The IAME Bambino is a new class and engine this season competing at the Route 66 Series. Parker Garrigus won the pole on Saturday with a 5th in the final and Wyatt Kessinger had a strong weekend finishing 3rd in both Saturday and Sunday’s finals!

One of the largest classes this weekend was the Yamaha Senior class. Killian Keavney had a 3rd in both finals with Brennan Harrington finishing 4th on Saturday and 6th on Sunday.

That wraps up the race report from MRP! The Comet Racing Engines team will be back at the next round in Springfield, IL (July 6-8) which includes a night race Saturday! The Comet team will also have a support presence at the Indianapolis Motor Speedway for the first ever karting event in the tracks history the same weekend.