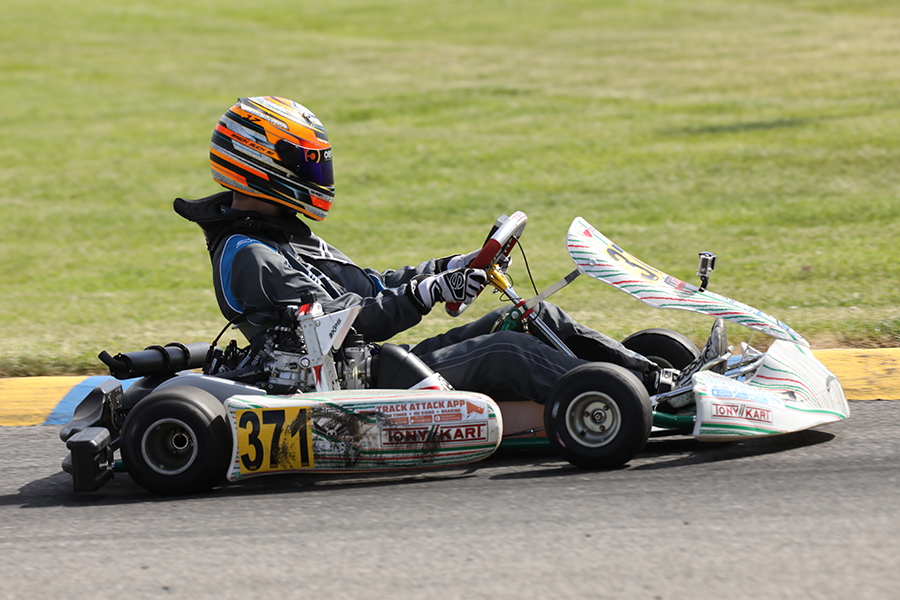 Mason Buck emerged as the Senior Max star on Sunday at Horn Rapids, taking the lead and the win in the late going
(Photo: Dalton Egger)

The opening weekend of the Can-Am Karting Challenge featured picture-perfect weather and a tremendous atmosphere at the Horn Rapids Kart Track in Richland, WA. With the opening day of competition in the books, the stage was set to begin the run to the championship weekend at Pats Acres in September. The racing was as competitive as expected, and the battles in the two Rotax Max categories were exciting. Mason Buck turned things up over the final laps of the Senior Max main of the event to steal the lead and the win from Kellen Ritter, while Jason Leung chased down and passed Hannah Greenemeier for the victory in Junior Max. The Briggs 206 classes were as close as we expected, with Derek Wang and Josh Pierson were triumphant in Senior and Junior, respectively.

The Senior Max class in the Can-Am Karting Challenge is tremendously competitive, and in Sunday qualifying, Mason Buck (Tony Kart) held the provisional pole until the final laps when Saturday winner Kyle Dupell (FA) snatched it away by 0.004 seconds. Dupell led from the start of the Prefinal, but Buck’s kart came alive over the final laps of the Prefinal to challenge on the final lap. Mason made a strong move to the inside entering turn one at the end of the Prefinal, but it wasn’t quite enough and he needed to get on the brakes as he closed to the apex to avoid contact with Dupell, who was turning into the corner. The loss of exit speed allowed Kyle Wick (Kosmic) to challenge in turn two for the spot, but Buck was able to defend, and they would finish that way to set up the fight in the final. In the 20-lap main event, Dupell paced the field early but the man on the move was Kellen Ritter (Kosmic), who was having a much better day than Saturday. Even though Ritter was back on form, nothing was going to stop Buck, who reset the fast lap of the race on three successive laps (17-18-19) to catch and pass the leader. With that late-race performance, Buck earned his first career Can-Am win, finishing on the podium with Ritter and Wick. 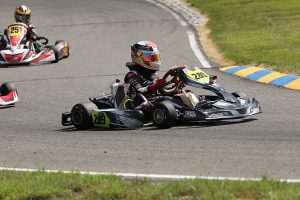 The Junior Max drivers are all racing for the shot at winning the ticket to the Rotax Grand Finals in Portugal this fall, and Hannah Greenemeier (Kosmic) was again on fire in qualifying to start the day off on a positive. Cooper Becklin (Birel ART), Jason Leung (Gillard) and Marco Kacic (Tony Kart) ran together for the entire session, and while Kacic looked to have the speed needed to challenge for the front row starting spot in the Prefinal, he was never able to fully leverage his pace. As a result, they would finish in that order. Greenemeier again paced the field in the 14-lap Prefinal, but the fast laps turned in by the top three were separated by mere hundredths of a second, as Leung took second over Becklin, who dropped to fifth but worked his way back to third. The early going in the 20-lap Final was managed Greenemeier, but the action heated up over the final three laps as Leung’s Gillard came alive, lowering the fast race lap by over two-tenths. Leung turned his quickest circuit on lap 18 to close on the leader and then attacked immediately at the end of the frontstraight to start lap 19, parking it at the apex to take over the lead. Leung then held off Greenemeier over the final lap to win his first Can-Am race, while Kacic passed Becklin on the final lap in turn two to emerge in third after a race-long battle.

Chris Eagles (Atomica) kicked off the Masters Max battle by laying down a fast lap on the final circuit of the timed session to edge Chris Mann (Birel ART) for the pole. Michael Groff (Kosmic) ran between the two drivers during the second half of the session, which was halted early when Rosario Verderame (Birel) was injured in an incident in turn four, which required the EMTs and a transport to the local hospital. Thankfully, he would be released later that day with no significant injuries. In the Prefinal, Mann jumped quickly to the lead from the outside pole and then drove uncontested to the win. Eagles again set the fast lap of the race as the chased the leader. The final was a great scrap as Mann and Groff swapped the lead early, before Mann got past to take control. Groff never let him stretch away and all three of the drivers, including Eagles, finished the race covered by less than a half-second. Chad Wallace (Birel ART) and Rene Bine (FA) completed the top-five. 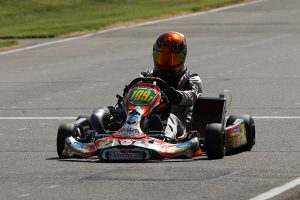 Kyle Wick (CRG) continued his pace in S2 qualifying, topping his brother Conner Wick (Kosmic) for the pole position. Matt Morgan (CRG) was third ahead of Cole Franchini (CRG) on the time charts. The order remained the same throughout the Prefinal, as Kyle completed his sweep of the podium in the final with a 11.3-second win over Conner. Franchini launched ahead of Morgan to take third early on, but Morgan took the spot back after just a few laps. This wouldn’t last, however, as Morgan went off in turn four, handing the final step of the podium to Franchini.

Derek Wang (FA) and Jacob Gulick (Kosmic) set up their day-long battle in LO206 Senior qualifying, timing in 1-2 with Wang holding a slight 0.014-second advantage. Brady Egger (Tony Kart) was third over Cole Nelson (Invader) and Teddy Sin (Gillard). Wang and Gulick would wage a head-to-head battle all weekend, with Wang going undefeated in the three sessions to win the Prefinal and the Final. The veteran stretched away slightly with a handful of laps to go, but Gulick charged back to make it exciting, essentially pushing Wang across the line. Nelson worked his way to third early, and held station through the entire race to take the final step of the podium. Egger fell back outside the top-five over the opening laps, but worked back to fourth ahead of Billy Weber (Italkart), who posted his best run of the weekend. 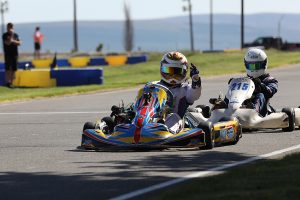 Derek Wang swept the LO206 Senior class, but he was pressured by Saturday winner Jacob Gulick at every turn
(Photo: Dalton Egger)

Josh Pierson (Tony Kart) set the pace in qualifying for LO206 Junior, timing in just ahead of Carson Kunz (Kosmic) and Daytona Arnzen (Exprit). Pierson ran away and hid in both the Prefinal and the Final, leaving the rest of the field of battle it out for the final two positions on the podium. The fight for second in the main was waged between Matt Winfrey (Invader) and Zach Franzke (Kosmic) until Winfrey went out on lap 11 when he went off track in the final corner, having been dealing with a sticking throttle all year. This allowed Arnzen to return to the fray after the off-pole starter dropped to seventh early. The young lady out of Idaho turned things up as she closed on the tail of the battle for fourth, eventually working her way through it and back to Franzke’s rear bumper. Arnzen was able to make the pass to take second, while Franzke had to settle for a well-earned third.

Antonio Constantino (Atomica) turned the fastest time in Micro Swift qualifying, outpacing Saturday winner Graham Trammell (Tony Kart) and Lucy Becklin (Birel ART). The Canadian continued to set the pace in the Prefinal, as he held off Trammell to the line, while the final featured an early battle between the two drivers until Trammell took control and cruised away to a 3.980-second triumph. Becklin once again improved her pace, setting her fast lap of the weekend in the final to finish third. Josh Pierson was again the lone driver in Mini Swift.

Trey Arnzen once again dominated the LO206 Cadet field, sweeping the day with the pole position in qualifying to begin the run of Prefinal and Final wins. Arnzen started at the tail of the field in the Prefinal and worked his way back to the front, taking his time to work his way forward. Sellner had gotten away early to lead the field, but after being chased down and passed, he held onto second. Arnzen started on the pole and led the main event from the start but fell back to third early, which allowed Mason Smark (FA) to pull into the lead for a number of laps. Arnzen chased him down and re-took the spot, but Smark used that opportunity to maintain second through to the checkered flag. Graham Trammell (Tony Kart) finished third to complete the podium.

The Can-Am Karting Challenge is now underway, and the drivers and teams are now looking forward to the next event, which will take place at Greg Moore Raceway in Chilliwack, British Columbia on the July 21-23. The series expects a large jump in IAME Swift numbers, based on input from drivers who are intending to join the grid at the next race.