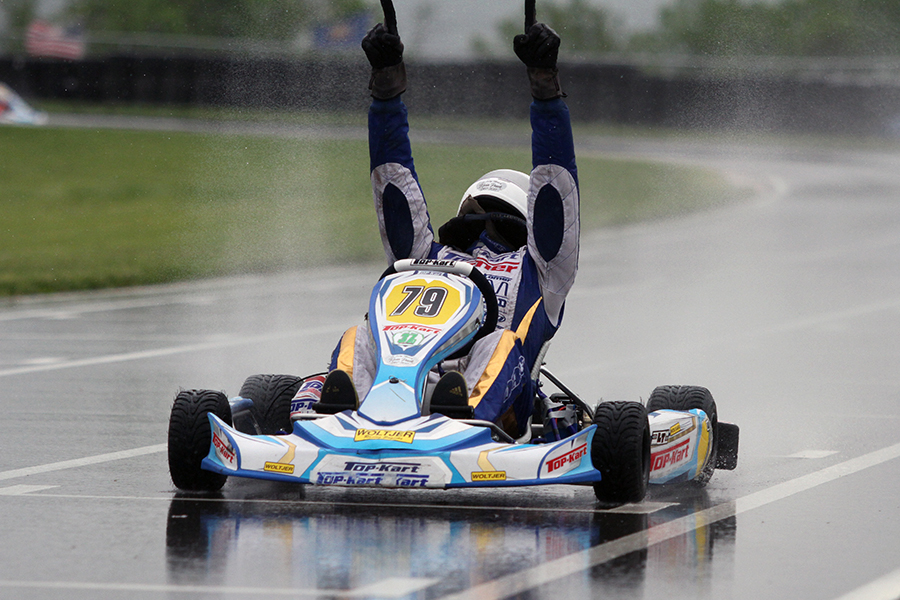 The final day of the Keystone State Nationals for the World Karting Association Manufacturers Cup Series completed with weather becoming a major factor. Just as the main events began at the Pittsburgh International Race Complex in Wampum, PA, the forecasted rain finally came down. Originally set to hit the area around 11am, the hard stuff came down just after the second main event was on track. A heavy downpour caused safety concerns and delayed things until the rain and water on the track became more manageable. The Finals became 8-minute shootouts, completing the fourth round of for the eight categories. Dakota Pesek used the rain from the heavens to honor his late father by winning the Yamaha Senior race as Braden Eves added to his win total on the weekend in Pro IAME Senior.

Yamaha Senior was the second class in the order, and the category on track when the downpour hit the facility. Their race was red flagged, and due to not reaching the halfway point, was a complete restart once the track was raceable. Top Kart drivers Alexander Kardashian and Dakota Pesek were on the front row, and Pesek assumed the lead after the second lap. From there, Pesek got quicker and quicker, establishing 1.3-second advantage to honor his late father Kevin Pesek with the victory. Nick Landi (FA Kart) drove to the second spot ahead of top qualifier Kardashian. Saturday winner Braden Eves (FA Kart) started at the back after his engine became loose in the Prefinal, kicking off the chain. He knifed his way up to fourth ahead of Jake Venberg (Merlin). 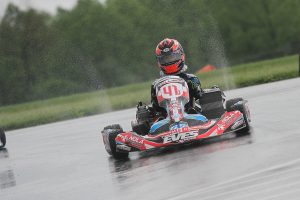 In the dry, Brandon Lemke had the field covered. In the wet, it was Braden Eves to win. Saturday winner Lemke (Top Kart) led the field to the green flag alongside Eves (Kosmic). The MDD / Zero Error Racing pilot got the jump and just drove away from the field in the wet weather. Alexander Kardashian (Top Kart) followed him through, matching his pace but unable to close up enough to really pressure. Eves scored the victory, becoming the fourth different driver to win on the season while Kardashian took his best finish on the year. TB Kart USA driver AJ Myers had the fast lap of the race, but the shorten race and held up by Lemke kept him from joining the top two, ending up on the third step of the podium. Lemke finished fourth with Nick Landi (Tony Kart) placing fifth.

Another driver was honored with a victory on the day with Tyler Ferris carrying an Adkins Speed Center powerplant to win in Pro IAME Junior. Three drivers were nose to tail in the Final, including Ferris (Top Kart), Prefinal winner Tahlon Yockel (Tony Kart) and defending series champion Pauly Massimino (Top Kart). Ferris came from third on the grid, moving into the lead on the second circuit. From there, Yockel and Massimino pressured, but were never able to take the lead away as Ferris drove to his first victory of the year, honoring the late Hall of Famer Kyle Adkins. Yockel and Massimino completed the podium with Colin Gasparini (Tony Kart) a solid third ahead of Alex Yankowski. 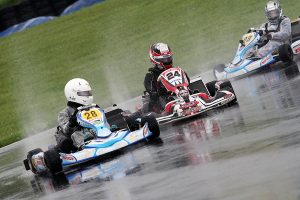 Tyler Ferris held off Yochel and Massimino for the victory in Pro IAME Junior (Photo: EKN)

Elliott Budzinski (Tony Kart) put on a rain clinic in the Yamaha Junior category for his second win on the season. The Michigan driver came from fifth on the grid, jumping out to the lead on the opening lap. From there, he just drove away, gaining basically one second a lap on the field. Mid-way, Budzinski got sideways on the exit of turn five, but kept it off the curb and resumed with the lead still in hand. After 13 laps, Elliott took the victory by nearly nine seconds. Caiden Young (Tony Kart) took advantage of the wet weather, scoring his first podium ahead of Tyler Ferris (Top Kart). Colin Neal (Tony Kart) was fourth with Evan Stamer (Margay) earning his first top-five finish in the series.

Dry or wet, Eric Fagan was the driver to beat all weekend. The field had him early on the day, with David Kalb Jr. (Tony Kart) taking fast time in qualifying while Zach Linsell (MGM) scored the Prefinal win. Fagan (Keener Kart) was able to get away from Kalb to score the victory in the shortened main event, sweeping the wins on the weekend. Linsell was forced to pull off course with a broken rear bumper, which gave Jeremy Warren (Track Kart) the opportunity to take the final step on the podium. Dustin Demattia ended up fourth with Evan McCorquadale (Track Kart) in fifth.

Florida driver Ashton Chilton is no stranger to the wet weather. Starting sixth, the Nitro Kart driver jumped forward in the wet main event, taking over the lead on the second circuit. From there, he established a four-second advantage to earn his second victory of the season – first with Nitro Kart in Manufacturers Cup Series competition. Brent Crews made it a 1-2 finish for Nitro Kart, as he beat out Logan Adams (Benik) and Saturday winner Connor Zilisch (Energy). Isaac Beekman (CompKart) won the battle for fifth. 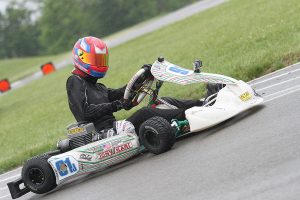 Elliott Budzinski schooled the Yamaha Junior field in the wet for the victory (Photo: EKN)

Yamaha Sportsman was the first class in the order, and the first to experience the wet weather. The race began in the dry, and a light ran began to fall. Rather than let the race go to the checkered flag, race officials pulled out the red flag to call the race early – a very questionable call considering the track did not appear to be unsafe at the time. The results reverted to the last completed lap, and at the time Mateo Rubio-Luengo (Benik) was at the point, thus scoring the victory. Connor Zilisch (Energy) was classified second ahead of Thomas Schrage (Tony Kart). Annie Rhule (Energy) and Garrett Adams (FA Kart) completed the top-five.

The other rain clinic on the day came in the Mini Swift division. Caleb Gafrarar started on the pole position for the main event after a penalty to provisional winner Elliot Cox (Energy) dropped him down to the third spot on the grid. Cox was spun around on the opening lap, and Saturday winner Mateo Rubio-Luengo (Benik) had issues of his own through the race. This gave Gafrarar a clear track ahead and behind, with the Russell Karting Specialties pilot driving away to a two-second advantage. It would have been more, except the young driver spun in the back section, losing eight seconds. Ben Maier and Miles Murray put two Nitro Kart drivers on the podium, the first trip to the steps for Murray in WKA compeition. Charlie Knoll and Christian Rutty (Benik) rounded out the top-five.