Lemke returns to the top as Eves matches performance in Yamaha 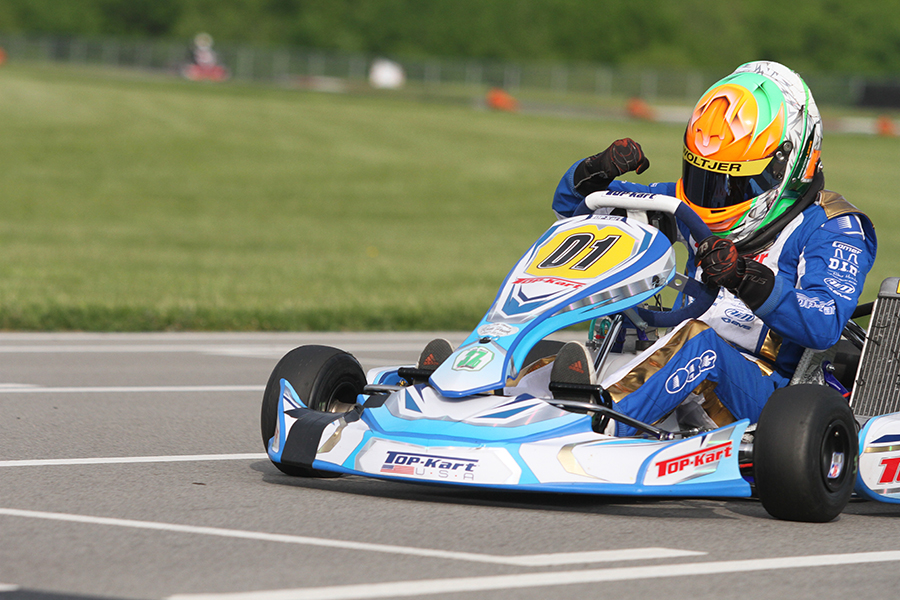 Brandon Lemke returned to the top of the podium with a solid day in the Pro IAME Senior category (Photo: EKN)

The WKA Manufacturers Cup Series moved further into the 2017 season with the completion of Round Three. Saturday was a long and busy day at the Pittsburgh International Race Complex with warm-up, qualifying, two rounds of heat races and the main events. Rain overnight left the track damp for the morning hours, with warm-up a mixture of dry and wet tires. Qualifying was deemed dry weather racing by the WKA officials, and thankfully was in better condition then the warm-up sessions. The sun eventually came out and provided great weather for racing around the 9/10-mile course for the eight categories competing. Brandon Lemke found his mojo again, winning the Pro IAME Senior division while Braden Eves continued his dominance over the Yamaha Senior field, winning his first on the season.

Brandon Lemke moved over to the AMK / Top Kart operation for Daytona KartWeek, and the event did not pan out as hoped for the former WKA champion. Today in Pittsburgh, Lemke looked like his old self, driving away from the Pro IAME Senior field in a solid performance for his first victory aboard a Top Kart. Braden Eves (MDD / Kosmic) was the top qualifier, edging out Lemke by 42 thousandths with championship leader AJ Myers (TB Kart) back by another 26 thousandths. Lemke got the jump at Heat 1 to lead all 10 laps and led the majority of Heat #2 to earn the pole position for the main event. That set up for Lemke to lead all 15 laps of the main event, unchallenged to his first victory on the season. Myers ran second early until Eves took over the position, placing runner-up and earning the fast lap of the race. Alexander Kardashian (AMK / Top Kart) beat out Myers for the final step on the podium while Ryan Raffa put another TB Kart inside the top-five. 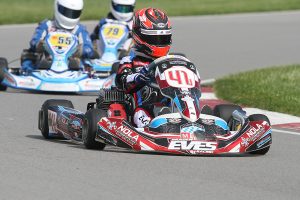 Braden Eves outran the competition for his first win on the year in Yamaha Senior (Photo: EKN)

Eves (MDD / Kosmic) swept the action in the Yamaha Senior division to become the third different winner on the season. Eves literally drove away in each of the on-track sessions, pulling out to a 3-second advantage. Top Kart drivers Dakota Pesek and Alexander Kardashian tried to keep up with Eves, falling back to round out the podium. Jake Venberg (Merlin) drove to fourth with Derek Hughes making it three Top Kart drivers inside the top-five.

Pro IAME Junior came down to a duel between top qualifier Tahlon Yockel (Tony Kart) and defending champion Pauly Massimino (Top Kart). Yockel scored fast time in qualifying while Massimino took both wins in the heat races. The two pulled away from the field with Massimino at the point early until Yockel took over on lap seven. Pauly stayed on his bumper the entire time, making his move on the final lap. The former champ held on to the final straight, reaching the checkered flag first for his first victory of the season. An impressive drive by newcomer Colin Gasparini (MDR / Tony Kart) to earn a spot on the podium next to Massimino and local driver Yockel. Tyler Ferris (Top Kart) and Junior rookie Madison Campeau (Top Kart) rounded out the top-five. 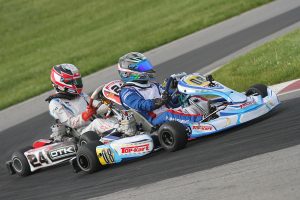 The Yamaha Junior main event was among the best races we have seen in 2017 and possible at the WKA Manufacturers Cup Series program in a few years. Four different drivers led the field, with the lead group including as many as 10 late in the race. Emory Lyda (Merlin) led early after taking the lead away from pole sitter Tyler Ferris (Top Kart). Arie Venberg (Merlin) took over the top position until Ferris found his way back to the point after dropping back to sixth. He led until the final circuit when Colin Neal (Kosmic) – who started 15th after issues in the opening heat race – put himself in the lead challenger position. Neal slipped past Ferris at turn one, holding on through to the checkered flag for his second triumph of 2017. Heat #1 winner Caiden Young (Tony Kart) slipped through to second on the final lap, moving Ferris down to third. Venberg dropped to fourth with Matthew Mockabee (Tony Kart) ending up fifth.

Eric Fagan helped to put himself back into the title chase with a victory in the Briggs 206 category. Fagan (Keener) advance from third in qualifying to win both heat races ahead of David Kalb Jr. (Eagle) and Zachary Linsell (MGM). The trio pulled away from the field in the Final, with Fagan leading early before relinquishing the position to Linsell. Fagan waited for the right opportunity, and the two went side-by-side in the final corners. Fagan came away with the better position, reaching the checkered flag for his first victory. Linsell settled for second with Kalb in third. Track Kart drivers Jeremy Warrne and Evan McDorquadale in fourth and fifth. 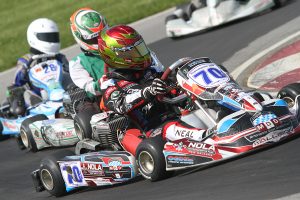 The day belonged to Connor Zilisch in the Cadet divisions. Zilisch swept the Pro Swift Sportsman division to pick up his first win in that category this season. All four sessions, the Energy driver was on top, including a duel with Brent Crews (Nitro) in the Final. Zilisch drove a smart final circuit to keep the fellow North Carolina driver back, reaching the checkered flag first, while Crews took second and fast lap honors. The fight for third went down to the wire as Ashton Chilton made it two Nitro Karts on the podium, beating out Logan Adams (Benik) and Annie Rhule (Energy).

Zilisch was able to earn the pole position for the main event in the Yamaha Sportsman division off a heat race win and runner-up to Logan Adams (FA Kart). The two broke away with the field along with Thomas Schrage (Tony Kart) and Annie Rhule (Energy). Zilisch and Adams separated themselves from the other two late in the race, with Zilisch once again able to perform a solid final circuit to keep Adams at bay. Zilisch reached the line first by 61 thousandths of a second. Schrage took third over Rhule with Sam Hinds (FA Kart) in fifth.

Mini Swift came down to four drivers dicing it out. Top qualifier Caleb Gafrarar (Parolin), heat race winners Mateo Rubio-Luengo (Benik) and Elliot Cox (Energy) along with Danny Dyszelski (Benik). Rubio-Luengo and Cox were the two that held the point throughout the 14-lap main event. Cox led for three circuits toward the end until Mateo retook the position. The defensive line around the final lap for Rubio-Luengo paid off, as he won the drag race to the checkered flag by 75 thousandths of a second. Gafrarar earned his second podium of the season in third, holding off Dyzelski while Ben Maier (Nitro Kart) ran fifth.