Birel ART at the Front of the International Scene at Genk 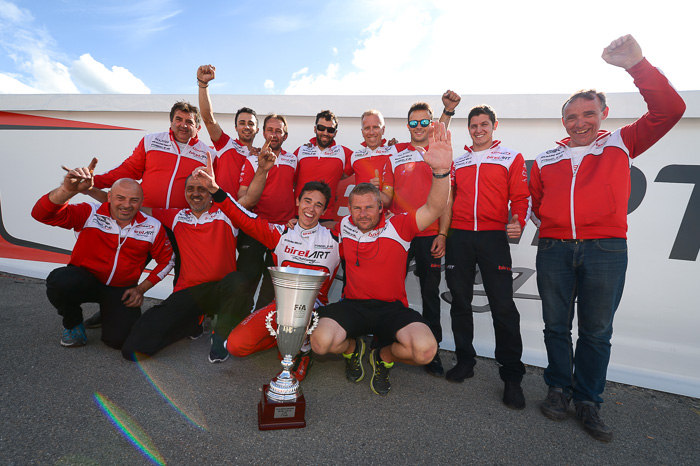 The European event of Genk was marked by very good performance from the Birel ART Racing Team. Among other good results, Kremers was consistently in a leading role in KZ, before finishing in 2nd position, and Longhi was among the top three in KZ2. The work of the entire team in Belgium led to a more than encouraging reward for the rest of the season.

“Birel ART can be legitimately satisfied with this European Championship weekend,” said Rickard Kaell Franchini, the team manager. “This is an important step in our progress and a confirmation of all the work done since the beginning of the year. We were confident in our potential and our strategy, but the genuinely convincing results for many of our drivers proved it to everyone. The whole team, as well as our technical partners, and of course our drivers, must be commended. The TM Racing engines we used, both from the TM factory for KZ, as well as those prepared by Daldosso in KZ2, contributed greatly to our success. We have always said that we are on the right track, and the performances we have achieved at Genk are now demonstrating this. We will continue our efforts towards the top with motivation increased tenfold.”

The top driver of the weekend was undoubtedly Marijn Kremers. Already fast at Sarno for the opening event of the European KZ Championship, the young Dutchman consolidated his form in Belgium. He was 2nd in Qualifying by only four thousandths from pole position. He then won a heat and fought for the Final victory with incredible competitiveness. He was rewarded with a brilliant 2nd position less than two tenths from the winner. Rick Dreezen (KSW Birel ART Austria) was also perfectly on the pace and was 2nd at the end of the heats. Despite a complicated start to the Final, he finished 7th in the competition. Kremers is now 5th in the championship, just ahead of Dreezen.

Winner of the Trofeo Margutti at Lonato last March, Riccardo Longhi also showed well on the Genk circuit against a strong field at the first event of the European KZ2 Championship. He was very consistent between 3rd and 4th position in the heats before climbing to 3rd place of the Final, with the fastest lap in the race. A detached spoiler penalty dropped him to 10th place after the fact, but the performance on track did not go unnoticed.

Andreas Dahlberg also achieved well since his 20th time. He was close to the top 10 in the heats and crossed the finishing line in 9th position, before a spoiler penalty unfortunately dropped him back down.

For his return to competition, Omani driver Abdullah Al Rawahi managed to qualify for the Finals after starting from 48th place in Qualifying before finally reaching a very honourable 27th place. Similarly Filippo Berto had a good performance, including the second fastest lap of his last race, although he did not qualify due to several setbacks.