Race Towards the CIK-FIA European Titles Gets Heated in Genk 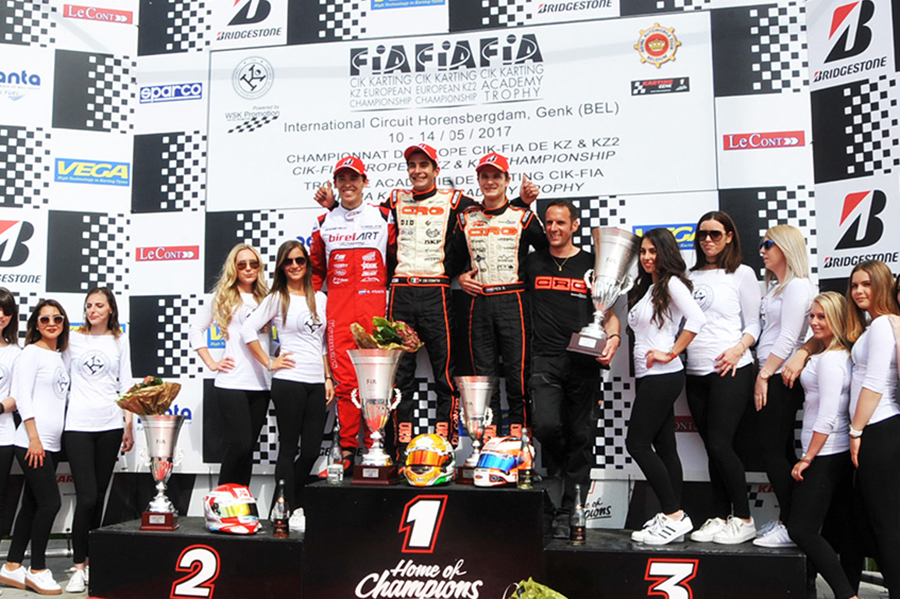 The appointment in Genk (B) was a thrilling one. Drivers and teams met in Belgium for the second round of the CIK-FIA European Championship. Today’s programme offered the Finals, which were all gripping and uncertain until the end. After the season-opener in Sarno (Italy), three weeks ago, everybody expected a great show in KZ, but also in KZ2 and in the CIK-FIA Karting Academy Trophy there were outstanding duels. A recap of the whole event hosted by the Horensbergdam Circuit in Flanders will be aired by Motorsport TV starting from 23rd May.

Paolo De Conto (CRG-TM-Bridgestone), once again, made himself conspicuous in KZ. The Italian driver, after his victory in the season-opener in Sarno, won in Genk too. The battle in the Final was a tough one since the very beginning; also the French Anthony Abbasse (Sodi-TM) – the best driver in Qualifying and the pole-sitter of the decisive race – aimed at victory but De Conto, on lap three, had already closed the gap starting from the fourth slot on the grid. De Conto gained an early lead, while the two Dutch drivers Marijn Kremers (BirelArt-TM) and Stan Pex (CRG-TM) – who finished in second and third position – followed in close pursuit. On the other hand, Abbasse had to settle for the fourth place. Thanks to this victory (in the picture on top, the podium with De Conto on first step, together with Kremers, second, and Pex, third), De Conto’s ledership of the category is steadier.

In KZ2 the new frontrunner is the Italian Matteo Viganò. He had a good start from the front row and managed to pass the German Leon Köhler (both the drivers on Tony Kart-Vortex-Bridgestone), the pole-sitter of the Final. Köhler tried to keep Viganò’s pace, but after few laps he got overtaken by the Italian Alex Irlando (Sodi-TM), the runner-up of the race. Hard luck for another Italian, Riccardo Longhi (BirelArt-TM): he placed third after overtaking Köhler but was hit by a 10-second penalty for the misplacement of his front fairing. Vigano’s victory allowed him to grab the first position of the KZ2 standings. Above, Viganò is on the first step of the podium, together with Irlando, second. On third step is Longhi, before his penalization.

van Vugt is the first leader of the Academy Trophy

The weekend of the Exprit-Vortex-Bridgestone one-make series said that, at the moment, the Dutch Mike van Vugt is the driver to beat. He finished the Heats in the top positions then, in the Final, he kept the lead until the chequered flag. Behind him, the Belgian Xavier Handsaeme seemed to be able to arrive in second despite a bad start, but the Dutch Tijmen van der Helm – sixth on the grid –  did even better and passed the Belgian to gain the second place. So, after today’s first appointment, the top positions of the Academy Trophy standings are occupied by van Vugt (above, on the podium of Academy Trophy Final), Helm and Handsaeme. Americans Joseph Daniele and Jace Denmark-Gessel finished 10th and 25th.