DKM Starts Into the New Season at Full Throttle 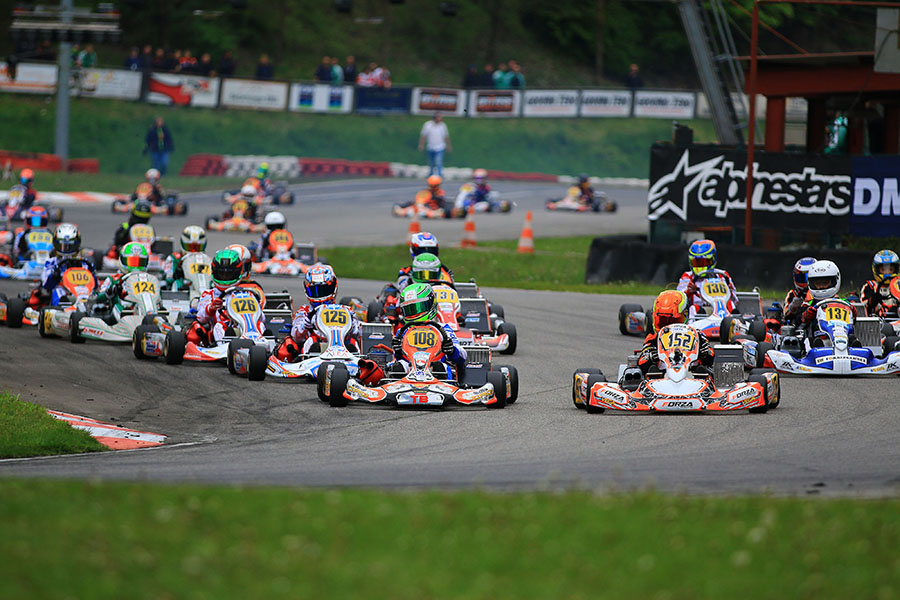 160 drivers started at the kick-off to the German Kart Championship in Bavarian Ampfing last weekend (May 5th – 7th 2017) and showed kart racing at the highest level. In best kart racing weather, six winners came out of the exciting and balanced races.

Even before the kick-off to the German Kart Championship the field of participants promised high potential. 160 drivers from 20 nations made for a record field. Things then got serious for the first time on the 1.063m long Schweppermannring. Numerous spectators saw diversified races in dry and partly summer-like conditions. Next to the favorites, several newcomers were also able to impress with strong performances. The four grade series are now led by David Schumacher (DKM), Hugo Sasse (DJKM), Flavio Camponeschi (DSKM) and Julian Müller (DSKC).

The kick-off was accompanied by an extensive live-stream again. The viewers at home were provided with 15 hours of kart racing all in all. Eight track-, three onboard- and two portable cameras filmed the events in HD quality. All races can still be viewed on www.kart-dm.de. A 30-minutes highlight magazine is going to be broadcast on the 21st of May at 11.40am on the German automobile-, engine- and motorsports-channel MOTORVISION TV.

Hessian Moritz Horn (CRG TB Racing Team) drove the best time during qualifying of the DMSB Shifterkart Cup and drove among the front field during the following heats as well. As the overall third driver he started behind Julian Müller (Mach1 Motorsport) and Alessio Curto (Beule Kart Racing Team).

During the first race there was a thrilling fight for the leading position between five drivers which lasted until they crossed the finish line. The quintet wasn’t even upset by a temporary slow phase and race interruption. Müller came in as the winner in the end and was visibly happy at the finish line: “After the good heats yesterday I’m very happy to celebrate the first victory now. Things can go on like this.” Up until the end his opponents kept really close though. Lucas Speck came in second in front of Curto. The Sodi Kart driver established himself on the second position during the first laps, but then temporarily fell back to sixth place. His performance wasn’t rewarded in the end, because a later time penalty threw him back to tenth place. New third driver was Jeroen Bos (CRG Holland), in front of Seppi Sedlmair (KSM Schumacher Racing Team) and Mark Potman (CRG Holland).

Kick-off winner Müller won the start again. But he then lost ground due to a collision, “after the fight for positions my axle was bent and I didn’t have a chance to fully attack again”, the Cologne resident added at the finish line. Meanwhile at the front, Speck drove his laps without interruption. The Rhinelander strengthened his front position and achieved the victory. “After a slight problem during qualifying I was able to improve a lot during the races and now I won. That’s a great start of the season. I’m already looking forward to the next race in Kerpen. I’d like to thank my whole team for the great work”, rejoiced the LS-Kart driver on the winners’ podium. Julian Müller had his hands full with defending his second position. Curto and Luka Kamali (SRP Racing Team) were in his wind shadow. The Cologne resident fended off all attacks though and came in second. During the last lap there was a switch at third position – Kamali drove past Curto and ended up on the winners’ podium. Jeroen Bos (CRG Holland) followed on fifth place.

Fabian Federer (SRP Racing Team) achieved pole position at the first appearance of the 41 DSKM drivers. During the heats he gave up his leading position to his brand colleague Flavio Camponeschi (CRG Germany). The former Kart World Champion achieved two victories and used his front position during the first final race.

During the start he temporarily lost the lead, but took it back after only three laps and drove towards a safe victory. Behind him Fabian Federer (SRP Racing Team) and Jorrit Pex (CRG Holland) fought a duel worth seeing during the first half of the race. Five-time champion Pex came out on top in the end and ended up on second place in front of the South Tyrolean. Rick Dreezen (KSW BirelART Austria Racing Team) came in fourth in front of best German driver Daniel Stell (Mach1 Motorsport). A later penalty caused Dreezen to fall back to eighth place. Reigning DSKC champion Max Tubben (CRG Holland) inherited his position: The young Dutchman started into the race from 17th place and showed an impressive catching-up race.

Polesetter Camponeschi showed the best reaction during the start into the second final race and led the field on the first meters. His direct pursuer was German Daniel Stell, but the Mach1 driver had to drop out of the race prematurely after a collision. Meanwhile Stan Pex (CRG Holland) took the lead almost unnoticed. The Dutchman was unstoppable then and caused another Pex-victory at the DSKM. “I started into the second race with new tires and am happy that my tactics were successful. My goal for this year is to fight for the title. The kick-off has already been very good”, Pex summed up. Directly behind him his older brother Jorrit fought a thrilling fight. Camponeschi, German Alexander Schmitz (CRG Holland), Federer and Jeremy Iglesias (Formula K Racing) put a lot of pressure on the five-time German Champion. He showed strong nerves though and achieved a Pex double victory. Camponeschi, Federer, Schmitz and Iglesias followed on the next places. The latter drove an incredible race: After a falling out at the first race, he fought his way from the end of the field to sixth place.

Hugo Sasse (CRG TB Racing Team) achieved a perfect debut at the German Junior Kart Championship. After the best time at qualifying, the youngster was unstoppable during the heats as well and kept the pole position.

The young drivers then showed a kick-off well worth seeing during the first final race. Sasse lost his front position this time though: Jonny Edgar (Forza Racing) achieved a perfect start and set the pace. His pursuers stayed in the British’s wind shadow but couldn’t find a way past him. As best German driver Sasse achieved second place in front of Hadrien David (Chiesa Corse) from France. The CRG duo Niels Tröger (CRG TB Racing Team) and Marius Zug (rl-competition.com) followed on fourth and fifth places. ADAC Sports Foundation’s sponsored driver Zug fought his way forward from tenth starting position to the top five during the course of the race.

Just like at the race in the morning, guest driver Edgar won the start again and continuously extended his lead during the course of the 19 laps. “I didn’t expect to fight for victory. I was on this track for the first time on Friday. I felt comfortable from the start and had two great races today”, the youngster from Forza Racing Team summed up. Behind him things were a lot narrower: David, Sasse and Luigi Coluccio (KSM Schumacher Racing Team) fought for second place. After several changes of positions, Frenchman David came in second in front of Coluccio from Italy. ADAC Sports Foundation’s junior Sasse came in next as best German driver in front of his team mate Tröger.

DKM-freshman Kilian Meyer (CRG Holland) impressed by achieving pole position at the top class of German kart racing. He had to give up his lead to Felix Arnold (KSM Schumacher Racing Team) during the heats though. The German achieved most: a victory and a second place.

There was high tension during the first final race then: Arnold won the start, had to forfeit his lead early to junior-climber Luca Maisch (CRG TB Racing Team) though. Maisch didn’t stay at the front until the end of the race either. David Schumacher (KSM Schumacher Racing Team) fought his way past the youngster and seemed to be on his way towards victory. Reigning junior champion Dennis Hauger (CRG Holland) came racing from behind. During the last lap there was a showdown then: Hauger went past the leading driver Schumacher. Behind him the other pursuers saw their chances as well and the top seven were completely jumbled once again. In the end Schumacher came in second in front of Glenn van Berlo (CRG Keijzer Racing Team), Maisch and Meyer. Champion Paavo Tonteri (KSM Schumacher Racing Team) came in sixth in front of his team mate Arnold. After a strong catching-up race Hauger lost his joy again quickly though – a time penalty cost him the victory.

The second race was dominated by the KSM Schumacher Racing Team. Three drivers of the Tony Kart team ended up on the winners’ podium: Schumacher, Tonteri and Arnold. The race wasn’t easy though. Towards the middle of the race a fight broke loose regarding the top places. The positions were only clear towards the end of the race. Behind Schumacher, Tonteri came close to the leading driver on the last meters but couldn’t find a way past him. Felix Arnold came in on the safe third place, followed by Kilian Meyer (CRG Holland) and an unleashed Tim Tröger (CRG TB Racing Team). From the last starting row, the CRG driver raced forward to fifth place. Double winner David Schumacher was clearly joyful about his success at the finish line: “After the good preparation races I was sure to fight for the top three here. A double victory of course is a dream start. It wasn’t easy for me during the second race though; I had a flat tire from the beginning and had to stretch myself very thin to defend my victory.”

After the eventful kick-off to the German Kart Championship, the next event is already going to take place in three weeks (May 26th – 28th 2017). The highest German racing series with its four grade series is then going to take place on the venerable Erftlandring in Kerpen.