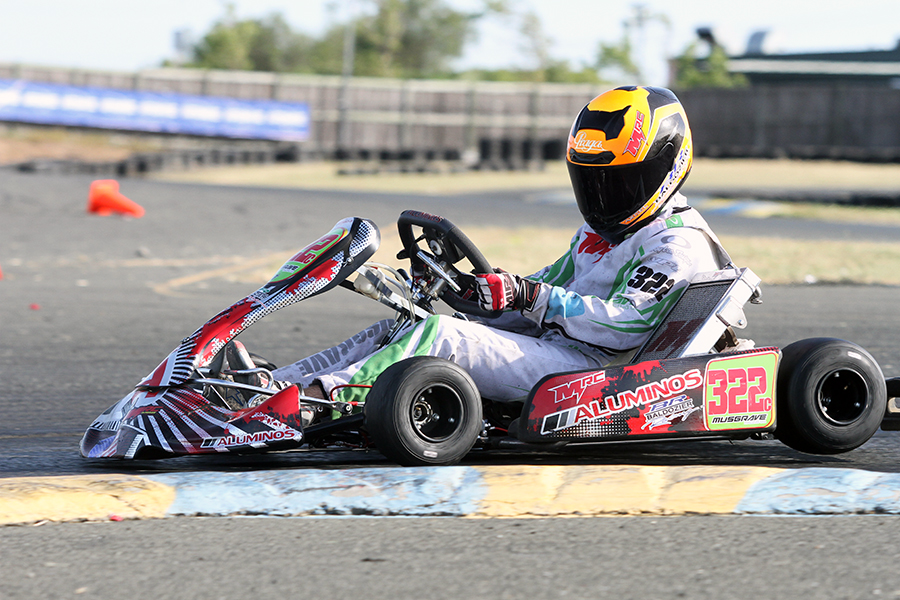 Billy Musgrave was moved to the top of the podium in S1 (Photo: EKN)

The 2017 edition of the Superkarts! USA Pro Tour SpringNationals completed Sunday at the Simraceway Performance Karting Center in Sonoma, California. The fourth round of the championship program welcomed sunny skies as temperatures warmed up, as did the action on the 7/10-mile course. Drivers were a bit more aggressive throughout the day, bringing about a busy day of action for the race officials, with many of the podiums decided by penalties or following tech. It was a big day for Vemme driver Braden Eves, coming through to score another SpringNationals triumph to back up his win last year in Phoenix. Billy Musgrave became the fourth different winner in the S1 to help make the championship chase even more interesting heading to the SummerNationals in New Castle.

Four different rounds, four different winners in the S1 Pro Stock Honda category in 2017. It appeared to be anyone’s for the taking throughout the day, especially in the main event. Defending champion Daniel Formal gave Champion Racing / Intrepid their first pole position with NorCal native Gary Carlton (LEM / Formula K) earning the win in the Prefinal. Carlton started on the pole position, but it was EKN Driver Rankings #1 pilot Jake French (DKC / Sodi Kart) jumping out to the lead. French was able to get away early as they fought for the second position. Carlton continued to slip back as Billy Musgrave (MRC / Aluminos), Saturday winner Nic LeDuc (Cambrian / Sodi Kart) and defending champion Daniel Formal (Champion / Intrepid) fought for the second spot. Musgrave emerged as the top challenge, eventually running down French. Once there, French went into defense mode, and Musgrave was egger to work past. Musgrave slipped past for the lead, with Formal coming through as well the following lap. With two laps remaining, Formal made his move for the lead at the helipad turn eight, nearly going over riding two wheels through the turn to earn the lead. Formal was able hold on through the final circuit to cross the line as the provisional winner. During the final few laps, Formal’s airbox was flopping around and was shown the meatball flag. Once he pulled in, tech official confirmed the airbox was disconnected and was removed from the results. This handed the victory to Musgrave, his third Pro Tour victory in three years. French finished second with WinterNationals winner Hunter Pickett (Aluminos) placing on the podium in third. LeDuc and Ron White (RWR / CRG) completed the top-five. 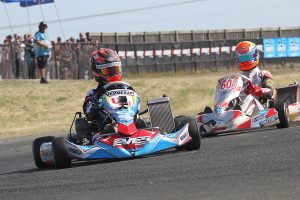 Braden Eves jumped to the victory on the final lap of the X30 Senior main event (Photo: EKN)

A full field of X30 Senior drivers meant anything could happen on the day. It was a battle to be at the front, and Senior rookie Dante Yu (J3 / CompKart) secured the fast time, but it was defending champion Ryan Norberg (PSL / Birel ART) coming away with the Prefinal win. 2014 champion and WinterNationals winner Jake Craig (RPM / Tony Kart) started the main event third, and jumped out front early on in the race. It appeared that he would run away, until Norberg led a group of drivers to run down the former champ, and from there it was anyone’s for the taking. At least 10 lead changes over the 25-lap event involving Norberg, David Ilavia (J3 / CompKart), and Dante Yu (FW / CompKart). Norberg took the lead late in the race, leading as the white flag waved. A defensive line with two laps to go brought in a chasing Braden Eves (MDD / Vemme), Brandon Jarsocrak (KSNA / Praga) and Cedrik Lupein (RPG / Kosmic). Contact in turn one, turn three and turn four shuffled up the group, with Eves emerging as the leader. Craig was able to come out as the runner-up with Jarsocrak placing third for a third time this year. Lupien ended up fourth with Yu fifth. Ilavia ended up sixth with Norberg back to seventh. The big mover of the race was Luke Selliken (RPG / Kosmic), up 35 spots to ninth after an improper tech sheet in the Prefinal put him at the back of the field.

Saturday was a sweep in the S2 Semi-Pro Stock Honda category, and so was Sunday. The day belonged to Kyle Wick as the RPG / CRG pilot swept the action, leading from qualifying to the final checkered flag. Wick drove away in the Final, pulling out to nine-second advantage. Sky Finley (DKC / Sodi Kart) drove to the second position with Saturday winner Riley Dickinson (DKC / Sodi Kart) advancing up to third after getting shuffled back at the start. Jason Pettit (Aluminos) placed fourth with Gianfranco Mazzaferro (PSL / Birel ART) in fifth.

Jess Peterson doubled up in the win column for X30 Master. The PGR / Ricciardo driver set fast time in qualifying and won the shortened Prefinal, which was stopped short after championship leader Blake Choquer flipped hard on the exit of turn one in the closing laps. Choquer suffered multiple injuries from the hard wreck, and EKN wishes the best in his recovery. The main was all Peterson, leading all 19-laps for a second victory of the weekend. Travis Irving (FW / CompKart) ran runner-up once again with Luke Vasquez (Tony Kart) crossing the line third. Vasquez was removed from the results from being underweight, moving Derek Wang (BBR / FA Kart) to the podium while Gary Lennon (Tony Kart) and Miguel Mier (DKC / Sodi Kart) rounded out the top-five. 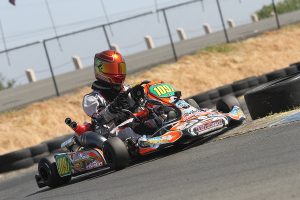 Prior to the X30 Master event, the S4 Master Stock Honda made a mess of the day with all the penalties issued on the day. Former champion Jordon Musser (3G / Birel ART) set fast time in qualifying but a broken chain took him out of the Prefinal while a mechanical sidelined Renato David (Orsolon / Birel ART) put the SuperNationals driver out. That gave Saturday winner Antonio Perez (VCI / GP) the win. The battle was on as both Musser and David drove forward. Ryan Kinnear (Champion / Intrepid) challenged Perez for the lead early on in the main event and was not able to make anything stick. Musser charged forward and took his shot at the lead. Slipping by while attacking lap traffic from the S4 Super Master field, Musser was hit off the course with David moving up into the lead. David led the rest of the way to the checkered flag as the provisional winner. He would be given a penalty for contact, dropping him to fourth. That gave Kinnear the victory – his first on the season – with Perez crossing the line second. Perez came across the scales underweight, thus removing him from the results and promoting Musser to the second position. Ben Schermerhorn (Birel ART) was promoted to his first SKUSA Pro Tour podium with David pushed down to fourth ahead of Victor Jimenez (RPG / Tony Kart).

2016 SKUSA Pro Tour S4 Super Master Stock Honda champion Robert Marks (PKS / CRG) made sure to bounce back from his DNF on Saturday, sweeping the action on Sunday. Leading from qualifying to the final checkered flag, Marks secured a third victory of 2017 ahead of Kevin Woods (RWR / CRG). Patrick O’Neill held on for third, making it an all CRG podium. Mike Jones (DKC / Sodi Kart) rebounded from a Prefinal DNF to finish fourth ahead of John Crow (MRC / DRT). 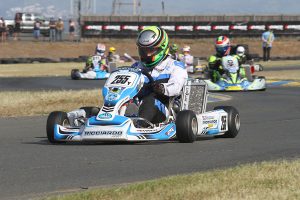 Jess Peterson made it a clean sweep on the weekend in X30 Master (Photo: EKN)

The battle for victory in the X30 Junior division was a four driver battle with WinterNationals winners Dylan Tavella (Tony Kart) and Tyler Gonzalez (Tony Kart) in the hunt along with Aidan Keel (Birel ART) and top qualifier Jak Crawford (Nash / FA Kart). Gonzalez came away with the win in the Prefinal, but retired early in the feature after losing a chain. Tavella established himself as the driver to beat with fast laps in the race, and leading the majority of the Final en route to his second victory of 2017. Keel was able to finish second ahead of Crawford. Maks Kowalski (Merlin) drove to his best SKUSA Pro Tour finish in fourth with Matheus Morgatto (Parolin) placing fifth.

It ended up becoming a battle of brothers in the Mini Swift division between Carson and Cole Morgan. The two Benik drivers were in the battle for the race win against top qualifier Reece Gold (Benik) and Connor Zilisch (Energy). Carson came off the win the Prefinal and was able to better his brother Cole to score his first Pro Tour victory for a Morgan 1-2. Gold completed the podium in third ahead Zilisch while Diego LaRoque (PDB) place fifth.

The Micro Swift victory came down to the final corner on the final lap. Top qualifier Ian Aguilrera (AM Kart) and Saturday winner Sebastian Ng (Nitro Kart) made it a last lap, last corner set-up for the win in the Final. Aguilera ran the defensive line to the final corner, allowing Sebastian the up and under move, winning the drag race to the line to earn his second victory of the weekend. Aguilera placed runner-up with Brandon Carr (Benik) winning the battle for third over Elliot Cox (Benik) and Prefinal winner Mateo Rubio-Luengo (Benik).