Organization returns to where it all began in 2010 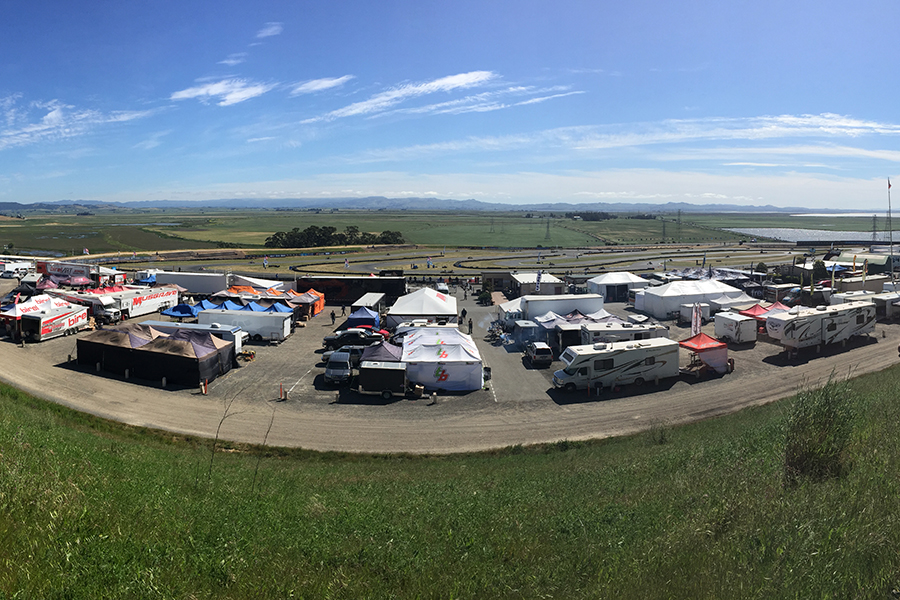 EKN’s Paddock Insider is a new Trackside coverage addition, bringing you notes, updates and breaking news as it happens. The article will be a timeline of events as they happen during the 2017 SKUSA Pro Tour SpringNationals at the Simraceway Performance Karting Center in Sonoma, California. The information will not be seen anywhere else, including interviews and photos. Please feel free to comment and discuss our coverage and today’s action in the EKN Global Members Discussion area below: For complete coverage head to the EKN Event Page. Also, tune in all weekend long to the live audio and live timing at eKartingNews.com/live

It is a packed house at the Simraceway Performance Karting Center as the Sonoma, CA facility is hosted its largest event ever, the 2017 SKUSA Pro Tour SpringNationals. SKUSA is back where it all began in April 2010 with the launch of the Pro Tour. Just over 100 drivers participated, and now after seven years, the number is over the 230 mark. Typically, fitting in that many drivers would not be a challenge for most high-profile facilities. The Sonoma circuit is different, situated on the side of Sears Point, paddock space is limited. With the large haulers and the many racers, the paddock has spread out into the garage area to the south where business call home. SKUSA Operations Manager Stan Bryniarski said everyone was helpful and polite with the challenge move-in, with drivers and teams at the farthest ends of the paddock not complaining one bit about the new element. The SKUSA staff did its work putting in the signage and flags around the 7/10-mile course, and the SpringNationals 2017 are underway. 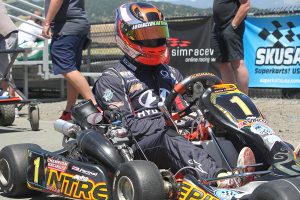 The #1 SKUSA plate has moved from the DR Kart to Intrepid with 2016 SKUSA Pro Tour S1 Pro champion moving over from DRT Racing to Champion Racing. The Costa Rican is making a return to the Intrepid brand, having run it back at the end of 2010 and early 2011. The split from DRT Racing was mutual, having served as a lead driver for the New Hampshire operation for four years. Now, Formal is looking to expand back outside the United States for karting, set for a possible entry at the CIK-FIA World Championships for KZ. The big difference bouncing from DR to Intrepid was the brakes and how the kart really responds to changes. Formal was in a solid debrief session with Brett Berryhill of Champion Racing, who has helped develop and score numerous victories with the Intrepid brand. Formal remains on the same Fisher Racing Engines powerplant he started out the season with in NOLA. 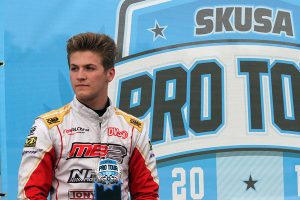 Brooks will relinquish the SKUSA Pro Tour lead with his absence here at Sonoma (Photo: EKN)

Christian Brooks left the WinterNationals as the championship leader in the X30 Senior category. The Nash Motorsportz / Tony Kart driver is MIA, putting his focus on the Red Bull Global RallyCross program, starting off the year with a podium finish in Memphis. That has put 2014 SKUSA Pro Tour champion Jake Craig into the lead. The inaugural WinterNationals winner leads over Comet Kart Sales driver Zach Holden – who is coming off victory and podium at the F1600 Championship Series event in Virginia last weekend. Craig is no stranger to the Sonoma circuit, competing here in TaG Junior at the inaugural SpringNationals. Talking with the Ryan Perry Motorsport / Tony Kart driver, the track is not taking down rubber as much as he thought. The draft is very important here, as we are seeing laptimes very close with the top-13 within three tenths for the fourth session on the day. The reverse direction does not separate the field as it makes the Tic-Tac-Toe section easier going up, rather than down. Craig feels confident in the package they have here, and it is expected to see him battle at the front all weekend long.