Maranello Kart Successful in Lonato with Zanchetta and Gonzales 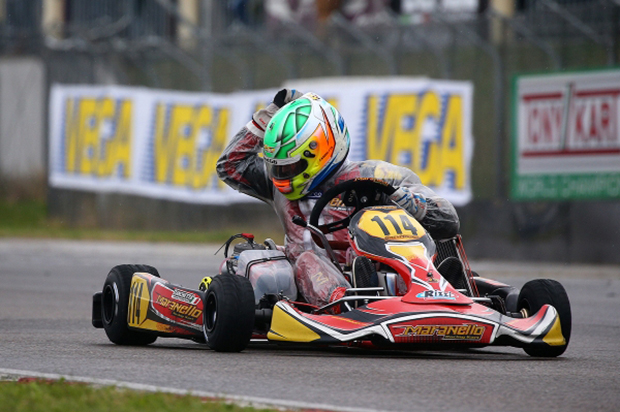 Marco Zanchetta secured a stunning victory in KZ2 at the Italian Karting Championship in Lonato, while Nicolas Gonzales claimed a great second place in Race-2 at the end of an amazing comeback. Giberti on the podium of KZ4. Kiano Blum finalist among the 103 drivers of 60 Mini.

Maranello Kart’s presence at the opener of the Italian Championship in Lonato has been overwhelming, with Marco Zanchetta, back on track after a few months of absence, taking the win on Maranello-Tm, and Nicolas Gonzales putting in a top class sporting deed.

Marco Zanchetta has been the main protagonist of the event of Lonato, displaying a great shape up to the first final, where he took an exceptional victory. Started from the tenth spot of the grid, Zanchetta managed to challenge the quickest of the category on the slippery asphalt due to the rain, crossing the finish line more than 2 seconds ahead of the runner up.

Marco Zanchetta’s comment right after crossing the finish line as winner: “I could not have a better comeback to racing. I did not have the chance to test a lot ahead of this race and I was struggling a bit on the dry, even if my overall performance was quite positive. I found the right feeling with the chassis and engine since the beginning, but I just lacked some regularity in qualifying heats, where I focused on avoiding mistakes while taking the best possible result. In the Final, when it started raining I found the right pace and I recovered a lot of positions, even if I do not love rain that much. The guys of my team have been great. I really want to thank each one of them, as it is a strong emotion to be back to the victory in this way.”

The French Nicolas Gonzales has been the other Maranello Kart’s “hero” of the weekend in Lonato. He had been extremely unlucky in qualifying heats, where he missed two results out of the three races, ending 48th out of the 68 drivers on track in the opener of the Italian Championship. Forced to run the second chance race from P20, Gonzales recovered up to the fourth place and qualified for the Final. He ended 11th in Race-1, before completing his masterpiece in Race-2 where he took the second place, while Marco Zanchetta closed his effort in fifth place this time around. Gonzales secured a truly deserved podium that places him among the main protagonists of the Italian Championship alongside Zanchetta.

Regarding the other Maranello Kart drivers, Marco Pastacaldi had to retire from Race-1, but recovered well in the second final up to P9, while Christoph Hold run a good qualifying ending seventh and was then 18th in Race-1 and 27th in Race-2. Marco Vannini ended Race-1 in 19th place and Race-2 in 24th. Luigi Del Vecchio was 22nd in Race-1 but had to retire from the second final.

Category 60 Mini saw the presence of 103 drivers. The Austrian Kiano Blum posted a great third place in his qualifying session, found his place among the finalists and then run two difficult races on the wet and slippery tarmac. He was 17th in Race-1 and 31st in Race-2. Alessio Migliucci, Lukas Zbul, Lukas and William Hofer could not qualify for the final stages due to some unlucky  episodes instead.

Maurizio Giberti confirmed to be among the quickest of KZ4 on Maranello-Tm, getting on the podium of both Finals. He secured in fact the third place in Race-1 and the second in Race-2.

Luca Iannaccone, General Manager: “Seeing such a high level of competitiveness by all Maranello Kart drivers, official and private, is a great satisfaction for us. This is a clear proof of the quality of the material.  I am really excited for the result obtained by Zanchetta and the commitment he put in his comeback to racing. Gonzales also delivered a great performance. He started slow but came out very well in the end. We are lucky to have great collaborators like Griggio and Rizzi, that are always committed to perform at best. The Championship is just started and the level is high, therefore I believe the competition will be tough and it is going to be good fun”.