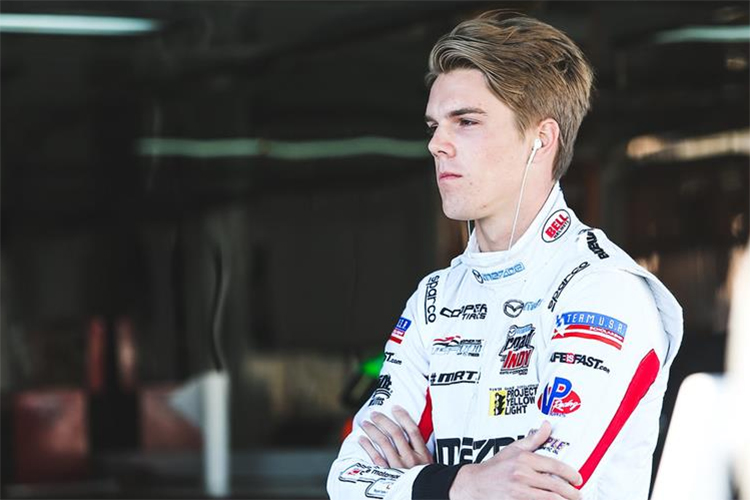 It would be an understatement to say the past eight months have been a whirlwind for Oliver Askew. The 20-year-old Floridian has gone from wondering how he was going to make a permanent move from karts to race cars, to impressing on an international stage in England, earning a scholarship into the Cooper Tires USF2000 Championship Powered by Mazda and taking a commanding lead in the championship with three victories in the first four races.

Askew began karting at the age of 7 and by age 18 had won Florida Winter Tours, Rotax MAX Challenge titles, a European title, and represented the United States in four World Finals. He won the U.S. Open Senior MAX Championship in 2015 and, after winning the BNL Rotax Challenge Senior MAX title, made his single-seater debut in the Formula Masters China series.

Here, Askew details his rise through the racing ranks, the dream come true at Mazda Raceway Laguna Seca – and how he and fellow Floridian Kyle Kirkwood just can’t seem to get away from each other.

What stands out in your memory of growing up in Florida? 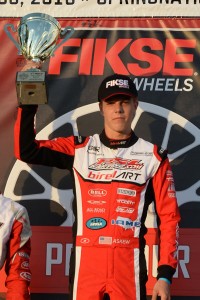 I was born in Melbourne, Fla. and grew up in Jupiter. I did the usual things, like go to the beach or go mountain biking. My mom is from Sweden so almost every summer my parents, my younger sister and I would go to Sweden to see her family, so many of my childhood memories are of Sweden. I still speak a little bit of Swedish, but I can’t go visit as much now that I’m racing.

I’ve been racing since I was 7 years old, so that’s pretty much been my life. One of my friends got rental karts for his birthday and I really liked it. My dad took me to Palm Beach International Raceway and I drove their karts for a few years until he bought me my own. I raced club events there with Kyle Kirkwood – so we have been racing together since I was around 8 and he was about 6 years old.

Take us through your racing career to date.

It really started when my dad talked to Kyle’s dad. Kyle and I met when I was at a birthday party in his neighborhood, and he came over still wearing his drivers suit. We got to talking and things just went from there. Soon, it was my dad and I working out of our SUV, racing the Florida Karting Championship series. Then I was signed by the Ocala Gran Prix team – they sponsor young drivers and help them through the ranks. I spent four or five years in the program and practically lived in Ocala, just driving karts all day.

They also paid for me to do a few Skip Barber racing schools. I’d been anticipating that moment my whole life. Racing a car was so different from a kart and I learned a lot. While I was working to find funding to race cars, I kept racing karts. I contacted Jeremy Shaw about the Team USA Scholarship program and he suggested I do some Skip Barber races to see what I had. I stayed in touch with him and then both Kyle and I were invited to Mid-Ohio for the Team USA interview process. It was so cool that we both made it.

We had two race weekends in England – the Formula Ford Festival at Brands Hatch and the Walter Hayes Trophy at Silverstone – and a week in between to just explore. We’ll never forget that experience. I started fourth in the final at Brands Hatch and was one of the fastest guys on track until a puncture put me out. At Silverstone, I won my heat race and my semi-final and started on the front row for the final next to Niall Murray, who had a ton of experience there. And there was a torrential downpour during the race, so that was my first rain race in a car. Niall was a bit quicker than me so I brought the car home safely and finished second.

The Team USA Scholarship earned you a spot at the MRTI Shootout. What did it mean to you to win and now compete on the Mazda Road to Indy? 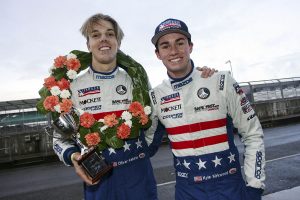 I realized going in that it could make or break my career. I put everything I had into it: I tried to keep my cool and I knew that even though I was in a good position going into the final, one mistake could have taken me out of contention.

This was my big break. It gave me the chance I had been looking for. Not only am I racing on the Mazda Road to Indy, which is a dream come true for me, but I’m a Mazda driver. Mazda is such a great company and brand and I am so proud to represent them. Looking at the drivers who have gone through this program, most of them end up as professional racing drivers. We all look to guys like Spencer Pigot as our biggest role models.

What are your expectations for 2017 – and how have they changed after three victories to start the season?

Based on testing and Spring Training, we knew we would be competitive. The championship is the primary goal. That’s one of the reasons I was so happy with our qualifying at St. Petersburg: it’s so easy to crash there and so many drivers leave there with a deficit, so I didn’t take any chances. Hopefully we can keep our momentum up.

What kind of activities do you do away from the race car?

I train every day. I’m still deeply involved in the karting scene and I coach drivers, including a 7 year old that I work with every weekend that I’m not racing.

What is your favorite racetrack? 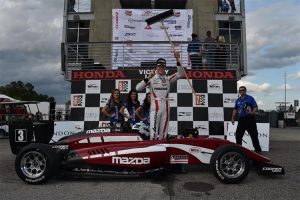 Askew after sweeping the Barber weekend in USF2000 (Photo: usf2000.com)

I would say Road America. I love the track, the layout and the town around it. My parents aren’t coming to every race, but they’re definitely coming to Elkhart Lake.

I would probably be doing marketing of some kind, or maybe be a pilot. My dad was an air traffic controller (racing was not in the family!) but he retired a few years ago. But honestly, without racing I would be lost.

Do you have a “hidden” talent?

I play guitar – acoustic and electric. I started playing before I started racing. My dad was in a band and he played bass guitar so that’s how I got into it. I picked it up again recently and I try to play every day. I listen to songs and go find them on YouTube so I can play them.

What do you do to relax and get away from racing?

I’m really into music, so I listen to music, play my guitar and go to the gym.