Kosmic: European Championship Begins with a Victory and Podium 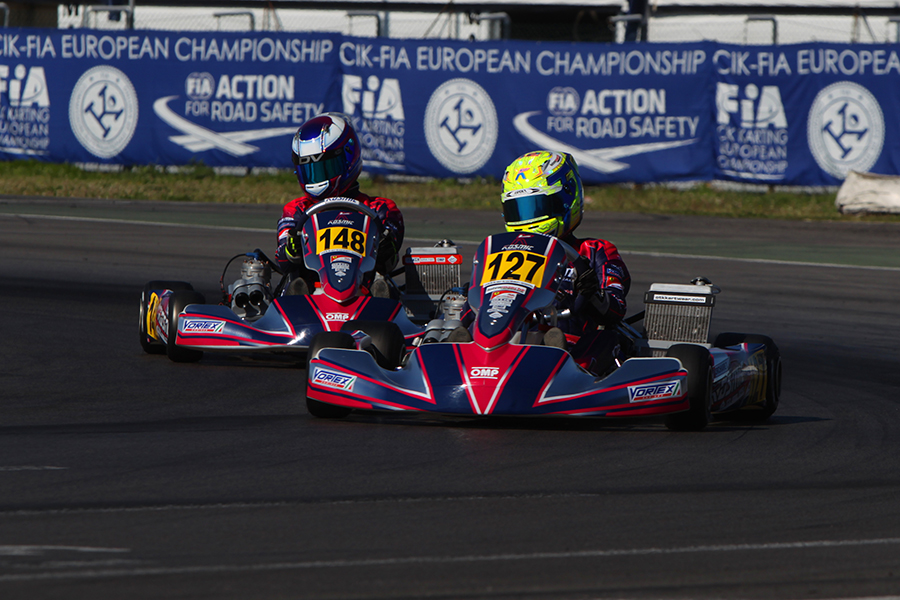 Pourchaire led the first European CIK-FIA round of OK class held in Sarno (Italy) and Hajek finished second in KZ. Our Mercury S and Lynx S driven by the Vortex engines were simply perfect, fast and reliable to the point that the overall result could have been even better for the Racing Department.

In OK class, we began with a formidable pole position, obtained by Théo Pourchaire. The heats confirmed the competitiveness of our drivers and chassis, able of winning four heats (three with Pourchaire and one with Basz) and earning the top positions of the final starting grid. Pourchaire finished first, Basz third, Milell ninth and Vebster fourteenth.

The final of the first European round was an unforgettable race for our young French driver. Théo perfectly jumped from the starting grid and led the command of the race from the first to the last lap. Basz fought for the podium and missed it for a few meters while Milell recovered further positions, cutting the finish line in sixth place.

With the result obtained Pourchaire is the leader of the provisional ranking with full score (35 points). Also in KZ the round on the Naples track began with a formidable pole position, signed by Simo Puhakka with 55.748.

The heats ended with two victories, one for Puhakka and the other for Hajek, who gained respectively the first and sixth position in the final starting grid.

In the final we were quite unlucky with Simo, who had to stop while at the lead of the race because of a contact with Abbasse, on the second lap, while our driver had regained the head of the race. Puhakka’s withdrawal was balanced by Hajek’s formidable race, with a great comeback until the second place.

Roman Stanek had a positive sequence of performance in OKJ, begun with the seventh best time in qualifying. Ufortunately the stop in one of the heats did not allow our driver to start in the top ten of the final. In the final, however, Stanek confirmed his competitiveness by cutting off the finish line twelfth with full score.

The next commitment of the Racing Department is set from 11th to 14th of May on the Belgian track of Genk, for the second round of the European CIK-FIA Championship of KZ class and the first round of KZ2.