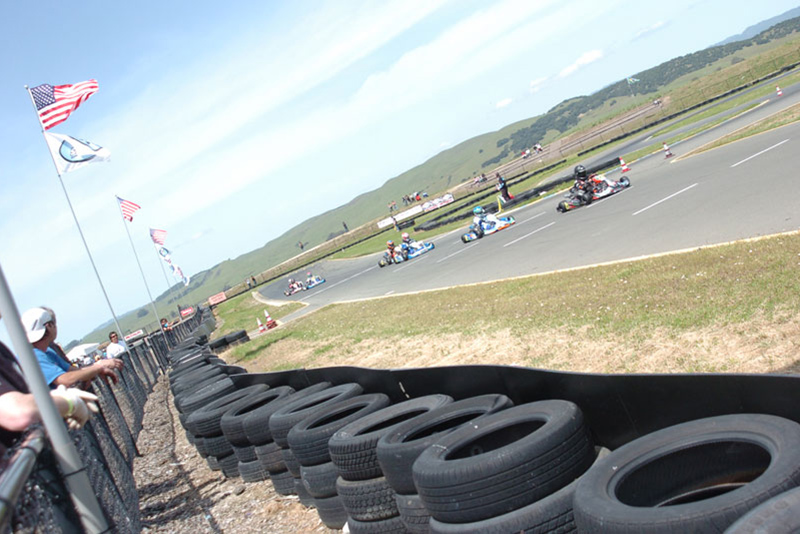 Superkarts! USA returns back to the site of the inaugural SpringNationals back in April 2010 in Sonoma, California (Photo: On Track Promotions - otp.ca)

There is no greater feeling then returning back to where it all began. Superkarts! USA is set to take pleasure in welcoming the SKUSA Pro Tour back to the Simraceway Performance Karting Center in Sonoma, California. The 2017 SpringNationals returns back to the same facility where the inaugural SKUSA Pro Tour event took place back in April 2010. It has been a long seven year journey with the organization evolving and the championship series establishing itself as THE pinnacle program in North American karting.

The bar continues to rise, as this year’s SpringNationals is set to be another record-breaking event as the biggest race ever to be held at the Simraceway karting circuit. Over 200 entries have been collected to date at the SKUSA home office for the May 5-7, 2017 event. The track is among the most picturesque locations in North America, located on the side of Sears Point in the Sonoma wine country, roughly an hour north of downtown San Francisco. It is a true destination location. For the racers, the track is tremendous and ranked among the best there is. The ‘Reverse National’ layout provides some of the best racing with plenty of passing opportunities, and the famous ‘Tic-Tac-Toe’ section of the course is sure to test the drivers.

One of the unique aspects of the Simraceway Performance Karting Center is the tight paddock space. With its location, flat land is scarce and thus Superkarts! USA is mandating teams and competitors to review the information regarding pit spot requests, move-in procedures, and camping information. All the information can be found at the SKUSA Event Page. Registration for the SpringNationals remains open until midnight on Saturday, April 29, available at the SKUSA MotorsportsReg.com link as well as additional purchase items at the SKUSAstore.com.

The WinterNationals at NOLA was the first SKUSA Pro Tour event for 2017 utilizing the new event format. An unofficial practice day will again be offered on Thursday, with nine divisions also taking part in the official practice day on Friday, followed by a complimentary BBQ dinner sponsored by Aluminos. Saturday and Sunday remain separate championship rounds with the Qualifying – Prefinal – Final format, creating longer races to decide the top drivers each day as they fight toward the coveted SKUSA Circle of Champions.

Three different countries are represented at the top of the Rolison Performance Group X30 Master standings. Canadian and Round One winner Blake Choquer leads over Peru pilot Mario Barrios – with US driver and defending Pro Tour champion Derek Wang in third. Choquer and Wang split the victories, while Barrios doubled up on the podium total. Nash Motorsportz S4 Master Stock Honda has former champion Jordon Musser at the top of the standings. Musser won Round One with Renato David scoring the victory in Round Two, leading the list of challengers. Robert Marks doubled up in the Mad Old Nut / Mad-Croc USA S4 Super Master Stock Honda class at NOLA, helping to start out his title defense. Mike Jones, Willy Musgrave and John Crow are longtime SKUSA racers, but new faces in the title chase for the S4 Super Master division.

SKUSA #2 plate holder Dylan Tavella and 2016 SuperNationals winner Tyler Gonzalez split the wins at NOLA in the Ryan Perry Motorsport X30 Junior category. The two lead the standings with Tavella holding a 20-point advantage heading into Sonoma. Luca Mars was able to come away from New Orleans with two wins in the Dallas Karting Complex Mini Swift division. Mars triumphed in both main events, and leads Santiago Trisini and 2016 double SummerNationals winner Reece Gold. Two drivers won at the inaugural WinterNationals in the Pure Karting Micro Swift class. Brandon Carr won Saturday with Elliot Cox standing on top of the podium for the first time Sunday. Cox, who carries the SKUSA #3 plate, holds the championship lead over Carr in the SKUSA #2 plate.

Coverage from the SKUSA WinterNationals have been broadcasted on the CBS Sports Network multiple times over the last month, and are now available on MotorTrendOnline.com. The Greelight Productions crew will be in Sonoma for the SpringNationals, filming racing throughout the weekend for a pair of race coverage shows. eKartingNews.com continues its long partnership with SKUSA, broadcasting the live PA feed throughout the weekend via their Trackside Live page – ekartingnews.com/live.