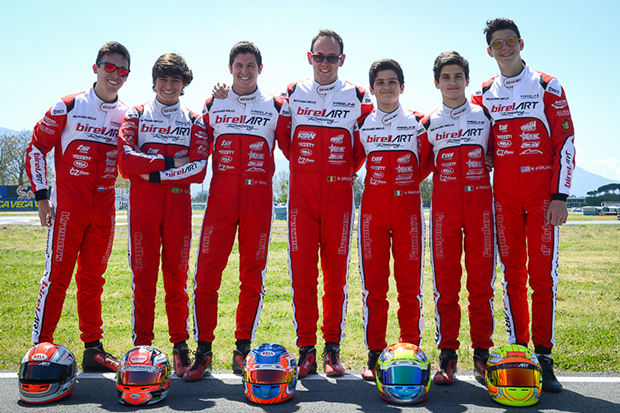 The European Championship started last weekend in Italy at the Sarno circuit. It was predictable that the competition would be very tough and it was. The Neapolitan event however confirmed the potential of the Birel ART Racing Team and gave all its members additional motivation for the continuation of the Championship.

The new CIK-FIA racing format contributed to the intensity of the competition by placing greater emphasis on Timed Qualifying and Qualifying Heats due to the disappearance of the Prefinals. The battles on the track were often vigorous throughout the meeting.

Pressure was at its maximum among the young Junior drivers for their first European experience. The difficulty of Qualifying was confirmed again and Dexter Patterson, who was very active during free practice, learned it at his own expense. Forced to start from the middle of the grid during the heats, he managed to move up convincingly, but also suffered from the actions of his opponents which deprived him of racing in the Final. Even further back in Qualifying than his teammate Patterson, Alessandro Famularo did not miss out on qualification for the Final thanks to interesting heats and excellent times. Anthony Famularo took advantage of his promising 22nd in Qualifying to complete three good runs out of four and was able to start the Final. He regained 15 places and finished, before a penalty, at a 18th encouraging position in his first European meeting.

Caio Collet perfectly fulfilled his mission in OK, starting from the 38th place in Timed Qualifying. He followed the instructions to move forward without taking risks and without making any mistakes to the 17th position after the heats before continuing in the same mode up to 12th position in the Final. It was difficult to hope for better in his situation, the main thing being to score some points in the championship. Michael D’Orlando started off with a good 16th time. He then managed to take two superb 5th places in the heats, but two retirements deprived him of access to the Final when a leading result was quite conceivable. Rasmus Lindh (Ricciardo Kart) made a good start and has alternated good results and disappointments. The fastest in his qualifying series, he managed to reach the Final, but the first laps of it put paid to hopes for a satisfactory result in spite of first class performance.

In KZ, Marijn Kremers shone from Qualifying onwards with his 5th fastest time, after dominating in the free practices. He finished 11th in the heats in spite of a breakdown and close to the top 10 in the Final before being penalised for his unhooked spoiler. Felice Tiene moved up to 9th place before suffering the same fate. Ultimately, Rick Dreezen (KSW Birel ART Austria) scored 11th in the Final.

“We have worked hard on our equipment, even though we are aware that the goal has not yet been achieved,” concluded the team manager Rickard Kaell Franchini. “We have relied on the latest developments from our technical partners TM Racing, Macháč Motors and GFR Engines to advance our Birel ART / TM karts and we don’t intend to relax!”