CRG Starting the European Championship On a High 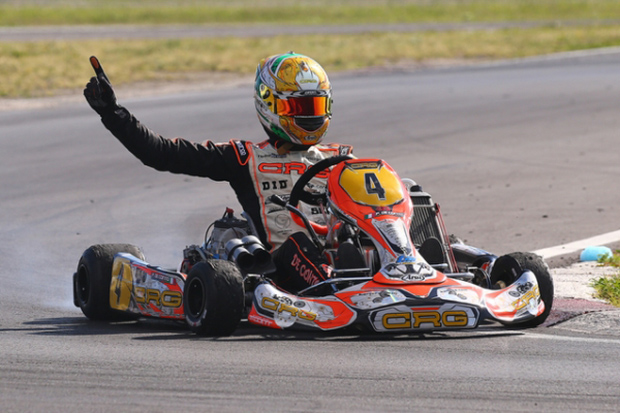 Paolo De Conto won the first round of the KZ European Championship in Sarno, Stan Pex and Mirko Torsellini also put in good races. Gabriel Bortoleto claimed his maiden podium in OK-Junior, while some hiccups affected the performance of CRG drivers in OK.

CRG celebrates with Paolo De Conto, on CRG-Tm-Bridgestone, and Gabriel Bortoleto, on CRG-Parilla-Vega, the first round of the European Championship, as De Conto scored a great victory in KZ, while the young Bortoleto claimed a good second place in OK-Junior.

The first weekend of the CIK-FIA campaign offered good satisfactions to CRG in KZ and also in OK-Junior, thanks to a new young protagonist, but disappointed a bit in OK, where Dennis Hauger was the best of CRG’s lot in P11 and Flavio Camponeschi had to retire due to a technical problem.

Paolo De Conto honoured in the best possible way the title of reigning world champion, winning a great race at the end of an overall good weekend, that had started with a “near” pole position – missed by just 0.002s and a win, a fourth and third place in the three heats.

Paolo De Conto radiant after the victory in Sarno commented the race in this way: “I am really very happy, I knew I could do well. We did a solid step forward compared to the latest WSK races. We found the right way to improve the chassis and engine setups. Stan Pex helped me easing my overtaking to the lead. After that, I did not have any problems and I took the win without pushing 100%. I feel a lot better, I recovered well from the snowboarding incident. This has been a good victory, it is great to start the European Championship in such a way. I needed that. I dedicate this victory to the whole CRG team and to my mechanics.”

Stan Pex also run a strong weekend. Fourth in qualifying and in the Final, he was just three tenths off the podium after taking the lead of the Final for two laps before letting De Conto through at lap five, as the latter kept running towards a dominating win. The two CRG drivers are currently first and third in the standings. The way ahead is still long, but the charts are already led by CRG drivers.

Mirko Torsellini’s debut in KZ with CRG has been very positive too. He has been very quick in the Final, exhibiting a race pace matching that of the pace setters and recovering very well from a difficult start due to the 18th time in qualifying. Torsellini improved to the closing P6 in the Final. Former European champion Andrea Dalè also put in a good performance, ending eighth, while the Spanish Enrico Prosperi was 14th and Jorrit Pex, who crossed the finish line in P6, was relegated to the 15th place by a penalty due to the mis-positioned front fairing. Alessandro Giardelli closed 19th his first race in KZ in what is his first year in a shifter category.

The young Brazilian of CRG Gabriel Bortoleto has been one of the main protagonists of the OK-Junior in the European weekend of Sarno. After fighting in the leading group, Bortoleto completed a great Final with an excellent second place behind the Briton Jonny Edgar and leading the Belgian-German O’neill Muth. The Dutch driver of CRG Keijzer Racing Kas Haverkort had to retire after taking the pole position and setting the new absolute record of the circuit of Sarno for the category in 59.159s. Alongside Haverkort, Bortoleto had been very fast in qualifying posting a 59.179s as his best time in the first of the three qualifying sessions, which confirmed the great speed of the CRG-Parilla equipment. Bortoleto is currently second in the championship just 4 points shy of the lead.

Among CRG finalists, the German Luca Maisch of CRG TB Racing Team was 11th, the Spaniard  Francisco Sagrera was 18th and Jose Antonio Gomez 21st. The French Gillian Henrion, the German Donar Munding and the Italians Luca Giardelli and Mathias Torreggiani could not get access to the Final instead.

HAUGER BEHIND, CAMPONESCHI DNF IN OK

In OK, Dennis Hauger did his best to recover from an unlucky qualifying where he was only 37th. Hauger recovered well in the three heats, but in the fourth and decisive race he was stopped by an incident. The Norwegian driver of CRG has started the Final from the 18th spot of the grid and closed his effort in P11. Flavio Camponeschi also managed to recover well in the heats from the 28th time posted in qualifying. The Italian started the Final as 13th, but had to give up shortly after due to a technical problem. The other CRG finalist, Glenn Van Berlo of CRG Keijzer Racing, ended 20th. Michael Rosina, Hannes Janker, Kilian Meyer could not qualify for the Final, while Callum Bradshaw had the ill-starred idea to put the dropped front fairing back at the end of one heat, and for this reason he has been disqualified from the event. Bradshaw has not been the first to do this, the first driver to do so was in fact a former world champion a couple of years ago. He will certainly not be the last either, until this debated front fairing rule will be valid.

The European Championship will resume from Genk (Belgium) next May 14th with the second round of KZ and the first of KZ2.