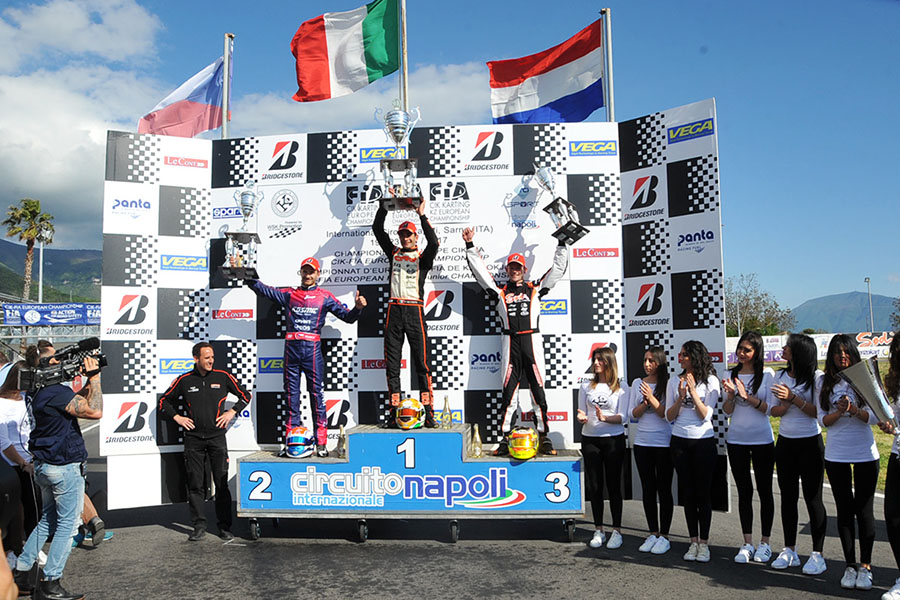 The winners of the season-opener of the CIK-FIA European Championship were not the drivers that everybody expected after the outcome of the qualifying stage of the race. The results of the first round –hosted by the International Circuit Napoli in Sarno (Italy) – tell us that it is going to be a ratherunpredictable Championship. The three categories admitted to the event – KZ, OK and OK Junior – will go back on track four more times in a calendar that hasgot 6 appointments in schedule for the 2017 European Championship. Teams and drivers seem to be in greatshape and it is not hard to foresee eventful and
gripping races until the end. After today’s live streaming, Motorsport TV is airing the recap of therace in Sarno next week.

DE CONTO BEATS ALL IN KZ 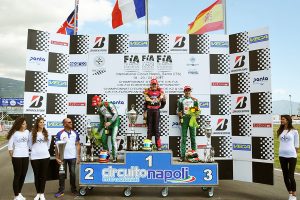 The KZ qualifying stage saw Simo Puhakka (Kosmic-Vortex-Bridgestone) finishing in top position. The Finnish, at the start of the Final, had to battle against the French Anthony Abbasse (Sodi-TM), who had managed to gain the lead of the race. Then the two frontrunners made contact and paved the way to the Dutch Stan Pex and the Italian Paolo De Conto (bothon CRG-TM); they took over the leadership with Pex in first and De Conto in second. Few moments later the Italian driver passed Pex and won the race, while the Czech Patrik Hajek (Kosmic-Vortex) took advantage ofthe situation and managed to gain the runner-up position. Excellent performance for the Dutch Bas Lammers, who recovered from the tenth position and scored third, celebrating his brilliant result with a bigsmile on the podium.

He finished the qualifying stage in first position andthen, in the Final, he did not fall short of expectation: the French Theo Pourchaire (Kosmic-Vortex-LeCont)did not esitate and gained an early lead ahead of the English Clement Novalak (Tony Kart-Vortex). The Polish Karol Basz (Kosmic-Vortex) remained in close pursuit of the leading pair but, during the last laps, theSpanish David Vidales (Tony Kart-Vortex) overtook him and grabbed the third place behind Pourchaire and Novalak. 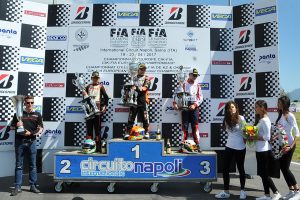 Qualifying Heats finished with the Brazilian Gabriel Bortoleto (CRG-Parilla-Vega) and the English Jonny Edgar (Exprit-TM) ahead of the pack. The script didn’t
change in the Final, even though the two drivers exchanged positions. Edgar led ahead of Bortoleto, while behind them it was O’neill Muth (Zanardi-Parilla) who put in an outstanding performance: the German driver recovered from eleventh to third, thanks to a last overtaking maneuver on the English Harry Thompson(FA Kart-Vortex). Eventually, Edgar managed to grab the final first position with the runner-up, Bortoleto, always in close pursuit.