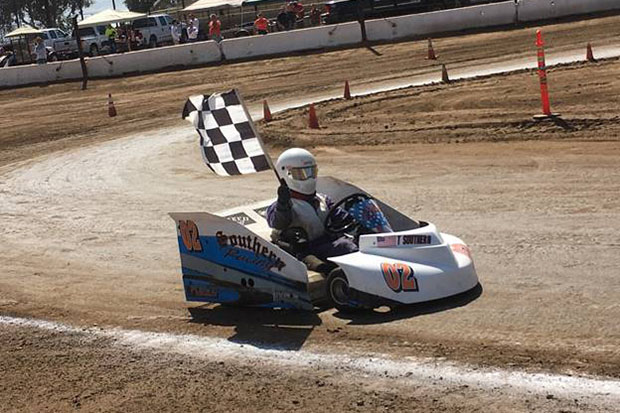 Under beautiful skies and warm temperatures, each of the five SCOK classes contested two heat races and main events.  In addition, several potential kart racers took part in the clubs “Arrive and Drive” program and the Norco Mower Association made its first appearance at The PAS.

The KT100’s represented the biggest class of the day and the big winner was Hesperia’s Thomas Southern.  Shaking off the disappointment of a broken chain just before the season opener at Wheel2Wheel Raceway in March, Southern started on the front row alongside his father, the defending KT100 class champion, Chris Southern.  At the drop of the Craig Zimmerman green flag, father and son raced side by side until they hit turn three the first time.  It is there that Thomas asserted himself and took sole possession of the point.  From then on, he gradually inched away until he had a half track lead at the end of the 20th and final lap.  Dad Chris, who won the season opener, stayed in second for the duration.  Las Vegas karter Art Klein, in a Scott Bohle owned kart, placed third with Ted Marshall and Tanner Smith of Los Angeles rounding out the top five.

Before the main event, the Southern’s split the KT100 heat races.

For the second straight race, San Diego’s Ronnie Benton smoked the competition in the Senior 4 Cycle class.  Like at Wheel2Wheel in March, Benton once again swept the show winning both heat races and the main event.  At The PAS on Saturday, he started on the pole and by the time the race was done, he had lapped the entire field.  Banning’s Desiree Gaynor, who started outside the winner on the front row in the main, made her season debut and came home second.  Chino Hills speedway motorcycle racer Tony de Almeida and John Leonhart of Norwalk placed third and fourth.

Cathedral City karter Dillon Hoffman came back from the disappointment of a seventh-place finish in the KT100 main event to win the Open Class 20-lap main.  Hoffman fought off the early challenges of Riverside’s “Dynamite” David Cardey, who has sipped victory champagne many times at The PAS in the USAC/CRA Sprint Car and California Lightning Sprint Car Series.  The win was Hoffman’s first in 2017.   Cardey, driving a pavement kart, finished second in his first ever PAS kart race.  Chris Southern, who won both the Open and KT100 season openers in March was third with Scott Bohle of Fountain Valley taking fourth.

Whittier’s Steve Juillerat, the defending F200 champ, won both heats and the main event in the class for his second straight 2017 win.  Banning’s Scott Gaynor, driving an eye catching new kart, was second.

In the Junior 1 class, the “Dynamite Kid,” Drake Cardey, a seasoned veteran in pavement kart racing, made his dirt debut and won the main event.  Seconds after he took the checkers, the eight-year-old winner broke a chain and coasted back to the pit area.  Brandon Head, in only his second race with the SCOK, was second to the Riverside racer.  Head and Cardey split the heat races.

Up next for the So Cal Oval Karters will be their second race of the year at Wheel2Wheel Raceway on the San Bernardino County Fairgrounds in Victorville on May 6th.