Even though the off season has seen much rain in Northern California, the 2017 Sanzaru Games Karting Championships started off on a sunny and dry weekend. A strong field of drivers turned out to start the year off with solid fields in most of the classes. The featured Senior Rotax class had a come from behind finish with a Junior Rotax Main that was dominated by a driver winning his first Main event. 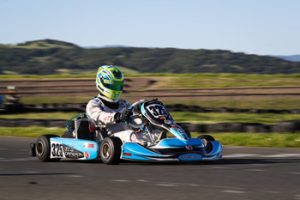 With a solid group of drivers, Brendan Fabular took the pole ahead of new comer Nick Short and Dominic Giansiracusa with both Enzo Prevost and Mason Cohn having problems in Qualifying and lined up 8th and 9th for both Pre-Mains. In the first Pre-Main, Fabular took the early lead and was pressured by Giansiracusa, Zia Harvey and Alejandro Marquez with Prevost and Cohen working their way through the field. In the end, Fabular came home just in front of Giansiracusa with Prevost and Cohen working their way up to 3rd and 4th. In the second Pre-Main, Giansiracusa wrestled the lead away from Fabular and opened up a small lead to come home the winner, Fabular 2nd with Cohen and Prevost working their way through the field to take 3rd and 4th. In the Main, Fabular, Giansiracusa and Prevost battled for the lead with Cohen having problems on lap 2 which forced him to the pits. Giansiracusa and Fabular turned faster laps than Prevost in the race, but Prevost used his expense to work his way into the lead late in the race and drove on to a slim win over Fabular and Giansiracusa with Marquez 4th, Mark Berman 5th and Harvey 6th. 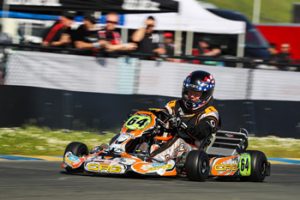 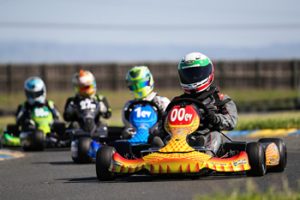 Matt Cresci took the pole ahead of Jimmy Casey, Enzo Prevost and Mason Cohen. In the first Pre-Main, Cresci took the early lead pressed hard by the other three drivers. Prevost worked his way into 2nd but Cresci held on at the end to take the win, Prevost 2nd and Cohen 3rd. In the second Pre-Main, Cohen worked his way into the lead and pulled out a bit of a lead to take a 1 second win over Cresci with Prevost 3rd. In the Main, Cresci and Prevost battled for the lead with Cresci making the best of the race pace to come out on top, Prevost 2nd, Cohen 3rd and Casey 4th.

Ten drivers took to the track with last year’s champion Roman Alekseenkov taking the pole ahead of Kelly Heil and Josh Buttafoco. SoCal driver Billy Cleavelin had troubles and thus had to start the Pre-Mains from the last row. In the first Pre-Main, Roman took the early lead with pressure from Josh and Kelly with Billy working his way through the field. Billy worked his way past Kelly and Josh by the end of the 8 lap race but did not have enough time to challenge for the lead. Thus Roman took the win, Billy 2nd, Josh 3rd and Kelly 4th. In the second heat, Josh and Kelly again challenged Roman for the front of the field early on with Josh getting past Roman by races end. Thus Josh took the win, Roman 2nd, Kelly 3rd, Ron Jenkins 4th and the fastest lap with Billy working his way up to 5th. In the Main, Roman took the initial lead with Josh, Kelly and Billy all challenging. Billy then went into the lead with Roman taking back the lead a couple of laps later. Shortly after mid-race, Roman went wide coming out of turn one and 4 drivers went by with Billy now in the lead and Josh and Kelly hot on his heels. In the end, Billy took the win, Josh 2nd, Kelly 3rd, Ron 4th and Roman 5th.

This was a very strong turnout for the start of 2017. In Qualifying, Ryan Persing took the pole ahead of Gia Lintz and Ayrton Tyler and fastest driver Sebastiaan Mulder having trouble getting out of tech and would line up 11th at the start of the Pre-Mains. In the first Pre-Main, Ryan took the early lead with Gia, Ayrton and Parker DeLong close behind and Sebastiaan quickly working his way through the field. Sebastiaan finally worked his way past all the drivers and took the lead near the end of the race and drove onto the win, Ryan 2nd, Ayrton 3rd, Gia 4th and Parker 5th. Unfortunately Ayrton did not make it through tech and was placed in 11th and Gia and Parker moved up a spot. In the second Pre-Main, Sebastiaan again worked his way through the field to take the lead near the end of the race. Unfortunately, Sebastiaan had trouble in tech again and was placed in 11th. Ryan Persing thus got the win ahead of Gia with Ayrton 3rd, Tyson Quach 4th and Adam Freire 5th. In the Main, the fastest driver, Sebastiaan, was starting well back in the field. Ryan led the field out of turn one with Gia, Adam and Tyson close behind and Sebastiaan working his way through the field. Then Sebastiaan spun as he was trying to pass another kart and fell further back. But the fast 2016 runner up in the Micro Max class was not deterred and he again put on a charge through the field. Near the end of the 15 lap Main, Sebastiaan over took the entire field and drove on to the win. Gia was holding down 3rd when she went off turn one and rejoined the race in 6th. In the end, Sebastiaan took the win, Ryan 2nd, Adam 3rd, Tyson 4th, Ayrton 5th and Gia 6th. 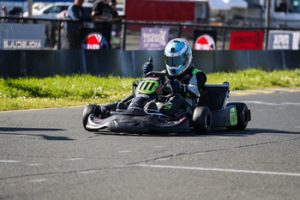 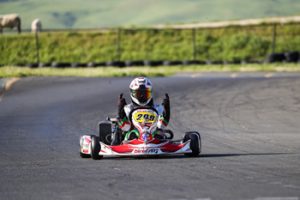 With 15 karts in the field, Junior Rotax was the largest class of the day. Several drivers moved up from Mini Max this year, and a couple of out of region drivers joined the race to prep for the upcoming Challenge of Americas race making this a large and competitive group of drivers. In Qualifying, Nick Persing took the pole just ahead of top talent Hannah Greenemeier followed by Aiden O’Neill, Grant Langon and Bryson Lew. In the first Pre-Main, Nick and Hannah battled for the lead and left the rest of the field far behind. In the end Hannah got the best of Nick and took the win with Nick less than a half second back. The best racing was right behind the leading duo with Aiden leading 5 other drivers including Grant, Brennan Stammer, Bryson and Dakota White. Aiden came home 3rd, Grant 4th and Brennan 5th. The second Pre-Main was a repeat of the first race with Hannah getting by Nick to take the win and Nick just 2 tenths of a second back. Bryson worked his way into 3rd and led a fast group of 7 karts. In the end, Bryson held onto 3rd, Aiden 4th and Grant 5th. After two well driven Pre-Mains, the 15 lap Main was anything but a well driven race. Nick was on the pole to start the race since Hannah had to leave early. Nick took the early lead but was challenged early on until he could get into a fast pace and pull away from the field. Right behind Aiden has being pressured hard by several drivers including SoCal driver Ethan Ho who was getting faster all weekend this being his first time at the track. The bump and grinding started behind Nick right from the drop of the green with Ethan and Aiden coming together in Tic-Tac-Toe and Aiden went off the track and several drivers getting by Ethan. Aiden and Brennan had contact with Brennan spinning out and rejoining the race well down the field. Aiden then pitted with brake problems. The field then settled down and good racing came out. Nick was way out front in a world of his own and drove on to a 10 second win, with Clayton Williams leading Grant Langon and Dakota White and Tyler Snow dicing it out. In the end, Nick took the win, his first ever Main win, Grant Langon got past Clayton to take 2nd, Crayton 3rd, Dakota 4th, Tyler 5th and Ethan working his way back into 6th. 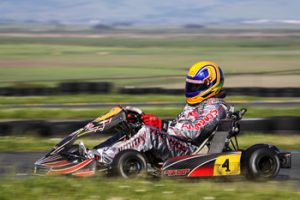 A strong turnout in this very Masters class. Given that 2 or 3 drivers were missing from this event, 80 Masters is looking to a strong class this coming year. Charles Hastings took the pole ahead of Greg Richter and Geoff Provo. In the first Pre-Main, Richter got the jump on the start and took the lead with Hastings right behind followed by Dave Holstein and Allen Miller and in the end, this is how they finished with Richter taking the win. In the second Pre-Min, Hastings took the early lead and went on to take a 2 second win over Roger Cornwall, Holstein 3rd and Miller 4th. In the Main, Geoff Provo offered his backup kart to Jim Kidd who was having a rough day in his 125 Masters kart. At the drop of the green, Hastings took the early lead and opened up a small lead over Cornwall, Holstein and Richter who were battling for second. Kidd started in the back of the field and slowly worked his way through the class getting by the three karts that were battling for 2nd midway through the race. Once by this battling group, Jim was then off to chase down Hastings. The three kart battling group of Cornwall, Richter and Holstein were still at it when Holstein got by Richter. In trying to stay with Holstein, Richter was side by side with Holstein when he touched the rear tire of Cornwall which popped him up onto Cornwall’s muffler and knocking it off. Richter then spun off and stalled his kart. Both Cornwall and Richter were out of the race with Holstein running in 3rd. Late in the race, Kidd then got by Hastings to take over the lead. At the checkered flag, Kidd took the win, Hastings 2nd, Holstein 3rd, Geoff Provo 4th and Stephan Gaudreau 5th. Honda Bucks went to the top three in the amounts of $60/$40/$20.

The next race will be April 23 where the track configuration will be the National Track and the Feature class will be the 80 Masters Class.