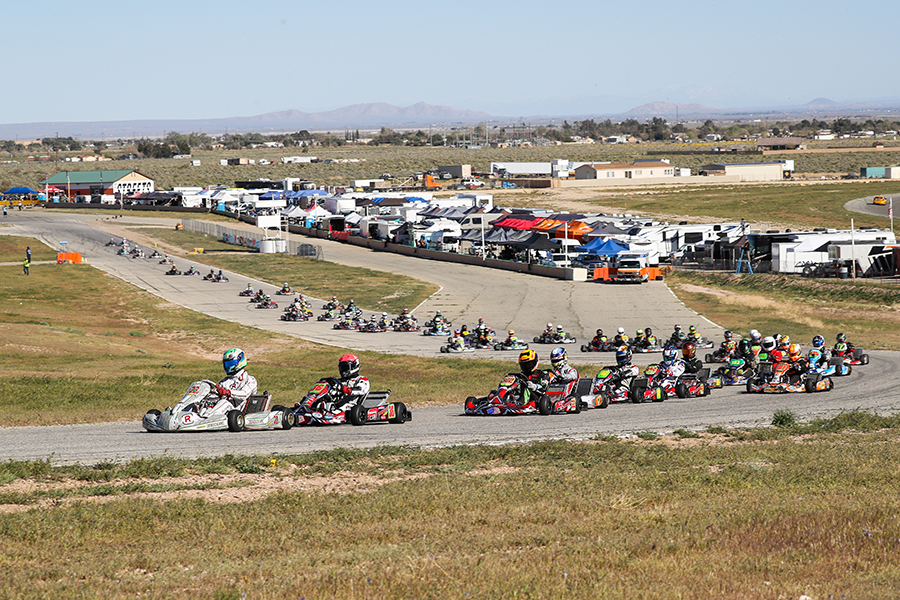 For the first time since 2011, the California ProKart Challenge took to the wild and fast Streets of Willow course, hosting the second round of the 2017 championship series. The Rosamond, California facility has been a regular stop on the California PKC schedule, and this time series promoter Tom Kutscher elected to bring something different and exciting. The more than 150 drivers took on the 1.6-mile layout – the largest course in Superkarts! USA competition this season. Four race groups split the time on March 31-April 1, welcoming returning winners and first time victors.

The largest race group of the day was the combined Stock Honda session, including the S1, S2, S3, S4, S4 Super Master and S5 classes bringing together 69 karts on the track at the same time. At the front of the group were the Vemme Kart S1 Pro Stock Honda competitors. Kolton Griffin led for much of the day, earning fast time in qualifying and winning two heat races. Griffin continued to lead the Final, with defending champion Billy Musgrave on his bumper. The two pulled away and Musgrave waited for the final circuit, working past Griffin to reach the checkered flag first for a second straight series victory. Matias Podboj completed the podium, with Hunter Pickett and Callum Smith rounding out the top-five. 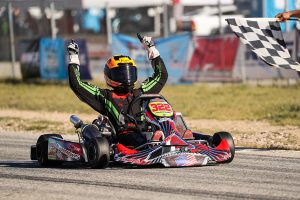 Jason Pettit used the trip to Streets of Willow to earn his first victory in the Mad Old Nut/Mad Croc USA S2 Semi-Pro Stock Honda class. Pettit came away with the win in Heat 2, and used the pole position to lead all 16 laps for the class victory. Kol Bailey was back by five seconds for the runner-up position, with Brandon Tomko rounding out the podium. Heat 1 winner Brad Dunford finished fourth with Garrett McKelvie in fifth. Top qualifier and Round One winner Kyle Wick was running second until he retired early.

The largest shifter class at 19 drivers was the Musgrave Racing Company S4 Super Master Stock Honda, which saw John Crow earn his second straight series victory. Crow drove away to an 11-second advantage in the main event after coming up from fourth in qualifying and winning the second heat race. Qualifying and the opening moto was led by Jonathan Allen, who drove to the runner-up position. Veteran road racer Todd Cameron came out to play, placing third ahead of defending series champ Ken Schilling, with Sean Bond coming home fifth.

Keawn Tandon was the driver to beat in the Nash Motorsportz S3 Novice Stock Honda division, setting fast time in qualifying before winning both heat races. Zach Pettinicchi came on in the main event, taking over the class lead midway before going on to a four-second advantage for his first series victory. Round One winner Anthony Fontana moved into second, dropping Tandon down to third at the checkered flag. Prescott Campbell and Evan Jonker completed the top-five. 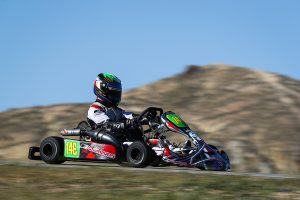 The Mike Manning Karting S4 Master Stock Honda category was unpredictable throughout the day, with a number of drivers in contention. Top qualifier and Heat #2 winner Vivek Tandon retired during the opening lap of the final, with Heat #1 victor Robert Marks unable to make the start following an incident in Heat #2. That opened the door for Rob Logan to lead during the main event until Curtis Cooksey put on a challenge. The two went back and forth in the closing laps, with Logan able to reach the checkered flag first by just two tenths of a second. Nick George followed them to earn the third step of the podium, beating out Nick Firestone and Terry Lawrence. Jacopo Pizzinato was the lone contender in the Rolison Performance Group S5 Junior Stock Honda category.

Twenty-two drivers took on the Streets course in the Formula Works/CompKart X30 Senior division. Jake Drew set the tone to begin the event, posting a 1:19.320-lap in qualifying to earn the opening heat pole position. Drew led the first nine laps of Heat #1 until retiring on the last lap, allowing Christian Brooks to take the win. Heat #2 was a frenzy of action with position changes all throughout the top-10. Brooks led early until Michael Avansino took over on lap six, all while David Ilavia was climbing the charts from the ninth starting position. Gaining one spot a lap, the Texan put himself into the lead on the final lap, reaching the checkered flag just 21 thousandths ahead of Brooks, with Avansino third. Lurking behind them was inaugural SKUSA Pro Tour champion Phil Giebler. The former Indy 500 Rookie of the Year joined the fight for the top position in the Final along with Round One winner and defending series champion Nicky Hays. Ilavia led the opening two laps before Hays fought forward to take over the position. The final three laps were an all-out war with the top four fighting for the win. At the line, Giebler took the victory over Brooks and Hays with Ilavia just off the podium. Jacob Gulick completed the top-five. 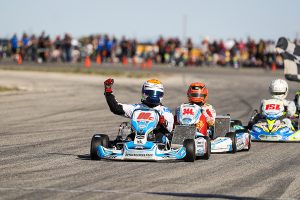 Jess Peterson nearly pulled off the sweep in the Phil Giebler Racing X30 Master class, running in the same race group as the Senior category. Peterson posted the fast time in qualifying and won the opening heat. He was on his way to the win in Heat #2 until retiring early, allowing Travis Irving to take the race win. Peterson came from 14th on the class grid to lead by nine seconds after 16 laps, recording his first class victory. Irving retired on the opening lap, allowing Tim Meyer to lead early on – until Peterson charged forward. Luke Vasquez worked past Meyer late in the race, as well, to take the second step of the podium. Gary Lennon drove to fourth with Brian Phillipsen ending in fifth.

Earning his second straight victory in the Ryan Perry Motorsport X30 Junior category, Trey Brown is the early favorite for the series championship. Brown nearly swept the action at Streets, missing out on fast time in qualifying. Kameron Perry recorded the quickest lap in the session, while Brown found himself in the seventh position. The Round One winner climbed to the top position in the opening heat, retaining the position through Heat #2 and coming through with a last lap pass to secure the victory in the main event. Zoey Edenholm crossed in the second spot ahead of Joey Brienza. Edward Portz and Tomas Mejia rounded out the top-five. 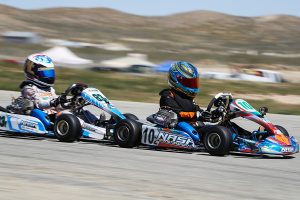 Carson Morgan was en route to victory in the Outsource Utility Contractor Corporation Mini Swift category, leading for much of the day. Morgan set fast time in qualifying and won both heat races to hold the pole position for the main event. He led the opening two circuits of the Final before retiring, leaving the door open for the rest of the field. Six lead changes took place in the final eight laps including Cole Morgan, Jonathon Portz, and Dustin Salaverria. When the checkered flag waved, Portz emerged the leader to earn the victory. Morgan crossed in second ahead of Salaverria. Daniel Inzunza won the battle for fourth ahead of Kasey Gillis.

The PKS Kart Supplies Micro Swift class welcomed first time winner Noah Warren, besting the 17-driver field on the Streets course. Enzo Deligny set the pace in qualifying, earning the win in Heat #1. Warren jumped up to the top spot in Heat #2, and was able to defend the spot to the checkered flag for the main event victory. Logan Toke was a close second, with Deligny completing the podium. Ethan Nascimento and Brock Boyse crossed fourth and fifth, as the top-five finished within eight tenths of each other.

The California ProKart Challenge will take the month of May off as the Superkarts! USA Pro Tour hosts the SpringNationals in Sonoma, California on May 5-7. The CPKC resumes on June 2-3 with a return visit to the CalSpeed Karting Center in Fontana, California. More details on the event will be posted shortly. For more information on anything related to Superkarts! USA, please visit the website – www.superkartsusa.com and be sure to follow the Superkarts! USA Facebook page, Twitter and Instagram accounts – or call the SKUSA head office at 951-491-0808.