Birel ART: Pattern of Satisfaction in the WSK at Sarno 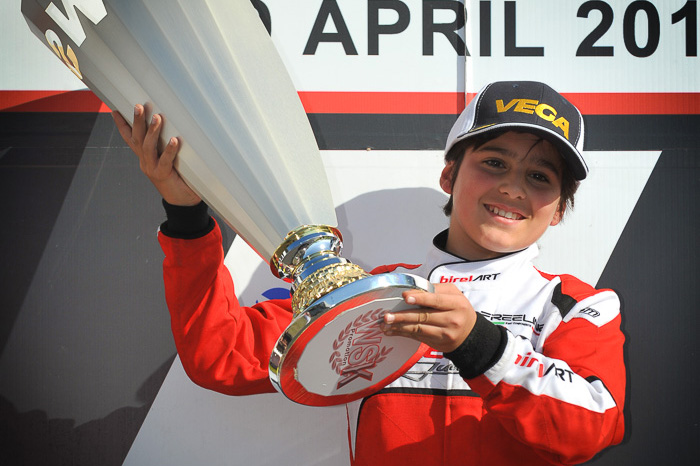 The fourth and final round of the 2017 WSK Super Master Series was particularly demanding at the fast Sarno track. The races were often lively and the mechanics were put to the test. However, the performance of the Birel ART Racing Team has reinforced the work in progress. The team can approach the European Championships, which will start soon, with good cards in hand. At the same time, the Birel ART Junior Team was rewarded with the first victory of Rafael Camara in 60 Mini.

The Birel ART Racing Junior Team was born last year from a common objective of Ronni Sala, Nicolas Todt and Giorgio Pantano to create a structure to detect and showcase the very youngest talents, and supported the rapid growth of the young Brazilian Rafael Camara to his magnificent victory this weekend at Sarno. Rafael has made his debut in Europe in the formidable 60 Mini category. Taking the first step of the podium in his fourth WSK race and entering the top five of the championship is surely a promising result that motivates the whole team to continue in this direction.

The performance of the Birel ART Racing Team in OK-Junior was again very stimulating. In a very competitive context, Dexter Patterson was able to surpass the handicap of his 56th place in Qualifying Practice to gradually return to the top of the table and secure an excellent 7th position in the Final. He also finished the championship at the edge of the top 10. Alessandro and Anthony Famularo were also able to achieve very interesting times, such as Alessandro’s best lap in Heat A-E during his 10-place climb. although the roughness of the races in the middle of the pack did not allow them to reach the Final, their experience was further enhanced.

The team is aware that it must make some progress in OK, but the overall level is nevertheless promising. Caio Collet saw his course interrupted in his Prefinal by an opponent who hit his exhaust valve as he started the race in the top four. Between several incidents, Rasmus Lindh (Ricciardo Kart) completed a memorable 16-place rise in the Prefinal to qualify in 7th place.

It is in KZ2 that the competition is the toughest at the moment. The team is actively working to improve the situation for the Birel ARTs. At Sarno, Marijn Kremers and Felice Tiene were consistently gaining places in the Qualifying Heats to get into the top 10. Kremers could not keep up with a mechanical break in the Prefinal, while Tiene had to make up for lost time due to a penalty for stalling.

The Birel ART Racing Team will now prepare for the European OK, OK-Junior and KZ Championship in less than two weeks on the same Neapolitan circuit at Sarno, drawing on the experience from the WSK Super Master Series.