Nicholas d’Orlando Shifts Focus from US to Europe 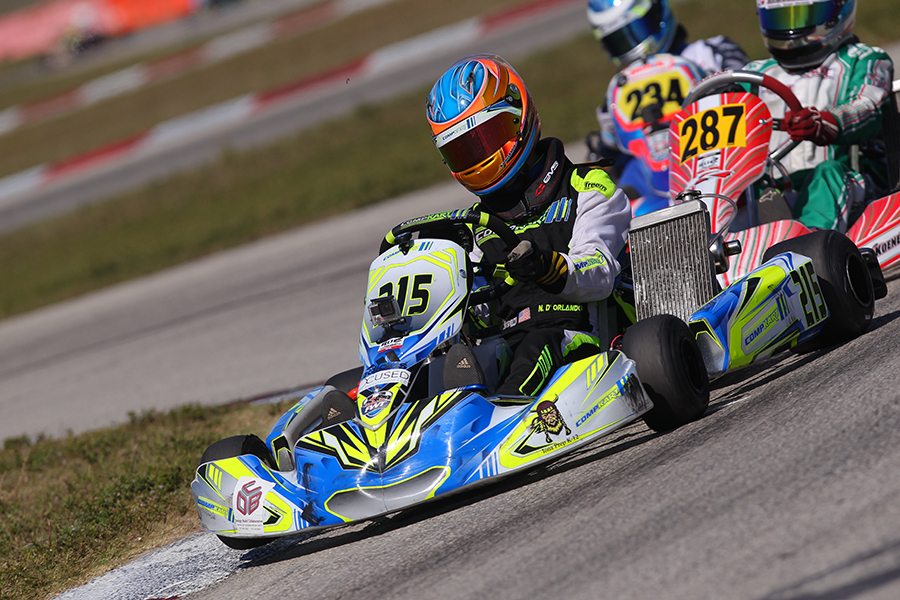 It was a busy month of March for the American junior class driver Nicholas d’Orlando, who had his share of ups and downs, while completing the Florida Winter Tour Rok Cup USA Junior Rok championship series in Ocala, Florida and also kicking off the SuperKarts USA series at the SKUSA Winter Nationals in New Orleans.  And now, the 13-year-old is preparing to take on the world’s top competition across the ocean in the WSK Super Master Series and CIK European Championship series.

d’Orlando and his J3 Competition team headed to the amazing Nola Motorsports Park in Avondale, LA in early March for the SKUSA Winter Nationals. d’Orlando would have two full race events, one on Saturday and the other on Sunday.  For Saturday’s Round 1 X30 Junior action, d’Orlando would be consistently in the top 5, qualifying his J3 Competition COMPKART in the 3rd spot, completing the pre-final in 5h and bringing home a 3rd place podium finish in the final.  For Sunday’s Round 2 X30 Junior action, d’Orlando would remain consistently in the top 10 as the rest of the field finally found the pace, and d’Orlando would qualify in the 6th spot. He would finish up the pre-final in 9th and hold on for a solid 8th place finish in the X30 Junior final to finish up the weekend.

The following weekend, d’Orlando would face off against another stout field of drivers at the championship round of the Florida Winter Tour ROK Cup USA at Ocala Gran Prix in Ocala, FL.   Pure bad luck resulted in the qualifying session although he showed to be near the top of the class throughout the entire practice sessions.  With engine failure in the early laps of qualifying, d’Orlando’s 20th place qualifying result would prove to be a challenge. His efforts in the three heat races would put him in the 9th position to start the prefinal where he moved up a spot to start 8th in the main event.  He would then finish his J3 Competition COMPKART in the 9th position in the final, officially putting him 5th out of 51 drivers overall in the championship. However, this was not the finish that the J3 Competition COMPKART team, nor d’Orlando, were looking for to end their Florida Winter Tour ROK Cup USA run. Despite that however, speed and talent were clearly evident in d’Orlando’s performance.

with the exciting announcement of the COMPKART European team, Nicholas d’Orlando and teammate Dante YU will run the remainder of the 2017 season in Europe.  d’Orlando will be making his European debut at the final round of the WSK Super Master Series in Sarno, Italy, April 7th-9th and also make his move up the ladder to the highly competitive OK (senior) category, where the d’Orlando Racing team believes the class specs are more appropriate for d’Orlando vs the OK-Junior class.

“I am very excited to be part of the COMPKART European Team and to be representing the brand abroad,” said Nicholas d’Orlando. “and making the move up to the senior class will be a big change for me.  But I am looking forward to racing at this level in Europe and to compete with such world class drivers.  I know there will be some adjustments and a steep learning curve when we get to Sarno, but we had a great test a few months ago in Casteletto [Italy] to help prepare us for this, and I am confident.”

d’Orlando Enterprises would like to thank J3 Competition (www.j3competition.com) for their ongoing support and guidance.  And a special Thanks to the support of their partners at DB Collaborative (www.db-collaborative.com) & owner John Macones, Danilo Oliveira and Nathalia Iervolino at Fyshe USA/Adidas Motorsport (www.adidasmotorsport.com), all the staff at Iona Preparatory School (wwww.ionaprep.org), and Focused Project Management (www.focusedpm.net).