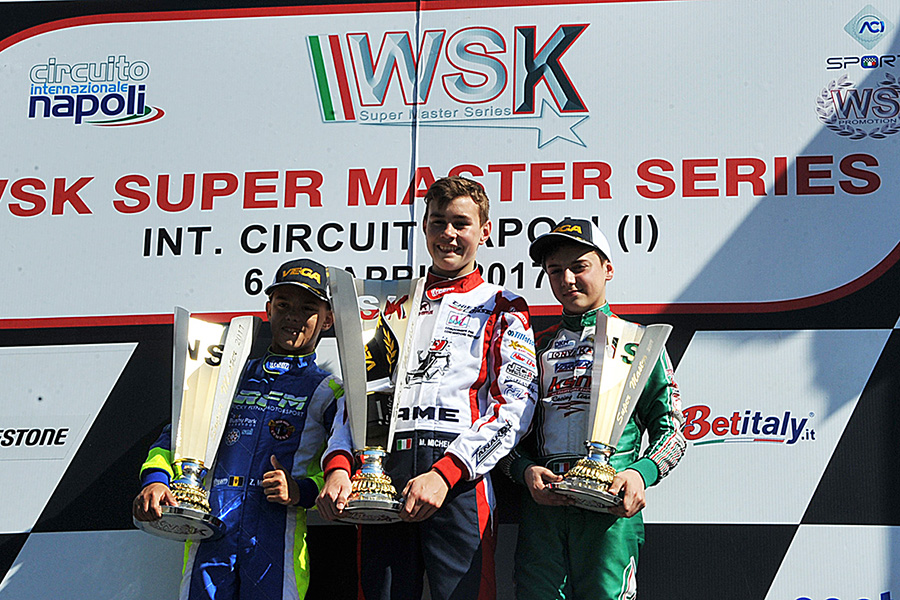 The spectacular show of international karting didn’t fall short of expectations: great final sprints at the WSK Super Master Series at its fourth and last round, hosted by the International Circuit Napoli in Sarno (I).

The KZ2 final was rather eventful; the Finnish Simo Puhakka (Kosmic-Vortex-Bridgestone) was forced to retire after few laps and from that moment onward the battle for victory was between the Czech Patrik Hajek (Kosmic-Vortex) and the two mates of the team Sodi Kart, the French Anthony Abbasse and the Dutch Bas Lammers. The winner was, eventually, Hajek, while Lammers settled for third, behind Abbasse: enough to keep the leadership of the category.

Basz is the winner in OK but Novalak grabs the Series

The Spanish Pedro Hiltbrand (Tony Kart-Vortex-Bridgestone) aimed at victory and he did all he could in the OK Final. The Spaniard gained an early lead but, after few laps, the Polish Karol Basz (Kosmic-Vortex) took over and pulled away. Basz finished in first position ahead of Hiltbrand, while the tussle for the remaining podium position was won by the Italian Lorenzo Travisanutto (Zaardi-Parilla), third ahead of the English Clément Novalak (Tony Kart-Vortex). The latter, thanks to today’s result, succeeded in the category.

Michelotto wins the OKJ Final but Rosso is the category leader

Hard luck for Christopher Lulham (Tony Kart-Parilla-Vega) and Zak O’Sullivan (FA Kart-Vortex): they had a good start and led the pack for the first three laps, then they made contact. With the two Brits out, the Italian Mattia Michelotto (Zanardi-Parilla) only had to keep at bay the driver from Barbados Zane Malhoney (FA Kart-Vortex) to win the race. The Italian Andrea Rosso (Tony Kart-Vortex), who placed fifth, won the category.

The victory of the 60 Mini Final goes to Camara. The Series goes to Mini

Heated battles between many drivers in the 60 Mini Final. During the first stage of the race, the Italian Gabriele Minì (Parolin-TM-Vega) had a hard time and dropped back from the first position. The Russian Nikita Bedrin (Tony Kart-TM) was very near to the victory of the Series, but Minì managed to achieve a great recovery and to grab the third place on the last lap. Minì won the Series in the nick of time, while the Final of Sarno went to the Brazilian Rafael Camara (BirelArt-TM). Second place for the Italian Francesco Pulito (EvoKart-TM).