Exciting Racing as Rotax Max Euro Challenge Heats Up in 2017 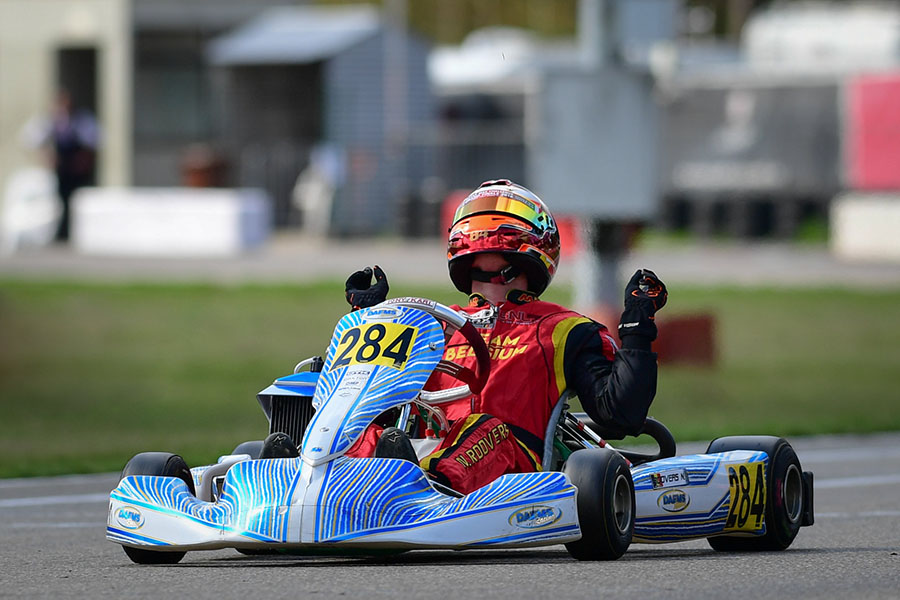 Round 1 of the 2017 season of the ROTAX Max Euro Challenge was hosted by the impressive Karting Genk: Home of Champions circuit in Belgium from March 29 – April 2, where the mixed weather and the 110 drivers warmed-up for a great start to the international series. The 1500 metre track layout at Genk never fails to provide the challenge for good competition.

With the introduction of the ROTAX Mini Max class, which aims to support the development of young karters to be better prepared and experienced for such events as the ROTAX European championship, the racing over the weekend was highly competitive and exciting to the final flag.

ROTAX MINI MAX
The newest of the RGMMC promoted classes at the 2017 RMEC proved to be an action-packed showdown amongst the smaller field with non-stop dicing for places in every one of the five races. Dutch youngster Kris Haanen (Slangen Karting / Tonykart) claimed pole for the qualifying heats, though it was closest rival Oli Pylka (UNIQ Racing / Kosmic) who secured pole for the pre-final with a win in the races, sharing equal points with Germany’s double race winner Linus Hensen (Kartschmie.de / Mach 1) classified on grid 2, as decided by the qualifying position.

Having won the pre-final by a good margin, Haanen was back on the front row for the final joined by fellow Dutchman Robert de Haan (CRG Holland / CRG) and was no surprise seeing both boys shared the Micro Max podium at the 2016 ROTAX Grand Finals. Jerzyk Spinkiewicz (UNIQ Racing / Kosmic) crossed the line close behind in P3 and Hensen won the three-way fight for fourth, while a penalty for not respecting track limits dropped the Polish driver Pylka to rear of field.

The final slipped through Haanen’s hands as the lead kept changing until Pylka setting best laptime led to the chequered flag. However, both drivers were penalised for their front fairing being dislodged, so the victory went to the German-Italian Gianni Andrisani (RS Competition / Tonykart). Second was Pylka then Haanen ahead of Dominik Reuters (Praga official / Praga) and Diaraf Keinde (Persistence Motorsport / Tonykart). Unfortunately, Hensen and De Haan were unlucky this time around, but showed they are likely contenders for the title this year.

Gianni Andrisani – “I want to thank my dad, my mechanic, my team and my uncle for all their help. This is a really positive result for me because I wasn’t too good in the heats, but it got better today. In the last corner, I was very happy to be on the podium – so to win makes me really, really happy!”

ROTAX JUNIOR MAX
Friday qualifying showed the potential of the Junior Max pace-setters for what would be a battle of the young guns to the wire at the first of the 2017 series’ rounds in Belgium, where only one second covered the entire class on the timesheet. Once more, it was the Dutch drivers who dominated the pace and the racing the following two days to steal the show across the border.

Tijmen van der Helm (JJ Racing / Exprit) out-drove JJ Racing team-mate Mike van Vugt to set the best lap of the event and therefore lead the 28-kart field from the lights in all three heats. Another of the JJ Racing stable stole his thunder though, as Pepijn Kraaijeveld won two of the races to take pole position in Sunday’s pre-final and line-up alongside Van der Helm with only one heat victory. Their rookie team-mate Van Vugt qualified on points for row 2 together with local driver Luca Leistra (Bouvin Power / Tonykart), who featured strongly at the Rotax Winter Cup.

The first of the finals ended in a four-way dash to the flag as Van der Helm held his line in the closing moments to have the edge over Kraaijeveld and Van Vugt, with Leistra losing out on a top 3 finish when he was given a 10-second penalty for exiting the track limits. Joining the Dutch trio to make it four, Rick Bouthoorn (Montfoort Motorsports / Kosmic) managed to hold off the fast Nick Cuppens (Daems Racing Team / Tonykart) and Ugo Gazil (DADD / RK Competition) in P6.

With the anticipated match play between the JJ Racing team-mates dicing for the win, the final was a terrific race won by Van der Helm to collect maximum points at the opening event. After leading for several laps, Van Vugt was a close second; although it appeared that Leistra might reel in the leaders within the last laps. While Kraaijeveld tried to defend P3 from Leistra, it allowed pace-man Cuppens to gain ground. They both passed the Dutch driver which then resulted in contact between the Belgian pair, seeing Leistra run wide to lose a place to countryman Kobe Pauwels (Daems Racing Team / Tonykart) in fourth and Cuppens later penalised for the move.

Tijmen van der Helm – “It was a great result for me with good races. Now, I have good points from this weekend for the championship and look forward to going to Salbris for round 2. I want to say thank you to my team JJ Racing, Jeff the manager, Jacco at JVD, Tarra my mechanic and Lals.”

ROTAX SENIOR MAX
Jordan Brown-Nutley (DHR / FA) continued his successful campaign this season with quickest lap in timed practice ahead of fellow Brit Johnathan Hoggard (KR Sport / Kosmic), both qualifying in group 2 of the Seniors in the competitive field of 40 drivers. The 2017 Winter Cup champion who claimed he was feeling quite positive about his pace and the DHR kart package, also took pole position for the pre-final having won two heats Saturday, as did Belgium’s Max Timmermans (KMS Europe / BirelArt) to start beside Brown-Nutley on the front row. Hoggard was a race winner to secure grid 3 alongside Frenchman Arnaud Sarrazin (PKS / Sodikart). Local hotshot Felix Warge (Tys Racing Team / OTK) had one heat victory… after a morning to forget.

Following rain showers the day before, Sunday was dry and drenched in sunshine that brought out the race fans. Racing with a strategy, Timmermans snatched the lead in the pre-final hoping to get the break before being hunted down by the pole-man. Unfortunately, he’d been hit from behind in lap 1 and had to retire as the exhaust came loose. Brown-Nutley stretched his lead to remain unchallenged, although Hoggard reduced the gap and posted best lap of the race. World #3 Berkay Besler (Bouvin Power / Tonykart) also looked good for a podium chance in third ahead of Warge, with Daems Racing driver Moulin Baptist (Tonykart) fifth.

The final saw a changing of the British guard when local hero Noah Roovers (Daems Racing Team / Tonykart) fought back from starting the pre-final on grid 27, to raise his hands in elation for an epic victory as Kart Prix #1 Belgium champion and winner of ROTAX Euro round 1. Besler set out to chase Brown-Nutley at the start, but soon Hoggard grabbed P2 and moved in on the leader until he was overtaken by Roovers just over half-race distance. With only three laps to go, the Belgian made his intentions clear and took first, followed by Hoggard into P2. Brown-Nutley attempted to have his shot at regaining second place in the last corner, but made contact with Hoggard and was given a time penalty relegating him to fourth. The English duo now ranks 1 and 2 in the championship standings with Brown-Nutley trailing by 2 points. Warge was classified third and German talent Robert Kindervater (Woik Motorsport / Tonykart) P5 ahead of Besler.

Noah Roovers – “I’m happy to win today. I told Jordan [Brown-Nutley] that I wouldn’t let him win this time, so I have done it! Today was a good result for me, also for the European championship. Since being on pole for my pre-final at the ROTAX Grand Finals in Sarno 2016 against many good drivers, I am confident that I can win the title this year. Thanks go to Daems Racing and my parents.”

ROTAX DD2
DD2 rookie and two times Slovakian national champ Nikolas Szabo (KMS Europe / BirelArt) hit the Euro Challenge limelight Friday when he out-paced a list of very experienced and highly credited drivers in the 2-speed gearbox category, to post fastest lap of the 7-minute official timed session and take pole position in all three qualifying heats. The 17-year old admits he was not surprised to be the one at the top in only his second DD2 meeting ever, “I had been quick in practice this week and really enjoying it. The DD2 is so much fun to drive”. Currently ranked 4th in the world, Haralds Gargaklis (Flandria Kart Russia / Flandria) set the next best time to share row 1 in the races.

The weather took a turn from the previous days to add some wet races to the program, which no doubt went in favour of the defending European champion Kevin Lüdi – also well-known for his skills in the rain. The Swiss driver won two of the heats while last year’s vice champ Constantin Schoell managed to take P1 in a brilliant move and keep Lüdi from winning the other race. Maxi Fleischmann (FM Racing / DR) was twice 2nd to line up next to Garkaklis on row 2 for the pre-final.

Lüdi led the 14-lapper for a short time before having to surrender to Schoell, who controlled the first of the finals up to mid-way when Garkaklis passed to take P1 until the flag. However, a front fairing penalty shifted the race honours back to the young Austrian and the leader fell to fifth. Fleischmann remained third with an inside grid for the final, while Zsabo set best lap to take P4. Driving for a top 10 position, Spanish karting champion Jorge Pescador (Praga Official Team) was unable to avoid another kart involved in an incident and collided just prior the finish line. The 27-year old was immediately taken to hospital and has undergone surgery for hip injuries sustained.

The final saw the lead swapping between Schoell, Fleischmann and Garkaklis at least twice each throughout the long 27km race with the likes of Marcel Schirmer (RS Competition / Tonykart) and Ville Viiliäinen (VRT / Tonykart) getting amongst the action as the race unfolded. Schoell looked comfortable out in front before Garkaklis overtook him on the inside with 6 to go, just as the #602 ran wide from something becoming lodged under the pedal making it impossible to control the kart. Fleischmann waited until the closing moments to make his move on the leader and stay focused to take the well-earned win. Viiliäinen also challenged Garkaklis to take second while Durante Cosimo Francesco (Piazza Musso / Parolin) gained 6 positions for a clear fourth. Schirmer in P5 won the ongoing battle with Zsabo in the last lap ahead of Lüdi.

Maxi Fleischmann– “Thanks to VPDR and my team FM Racing with my mechanic for a great job. The pace was good and I look forward to the next races now.”

ROTAX DD2 MASTERS
Winner of the round 1 Masters class in the ROTAX DD2 category was multiple champion and former world #1 Christophe Adams (GKS/KMS / BirelArt). He was fastest qualifier in the Masters within a few tenths to the DD2 pole-sitter and finished 10th overall. Adams was extremely happy and somewhat surprised to be so close to the laptimes of the much younger competitors in DD2. “When I’m so fast, I will keep coming back again and again to compete against these young drivers!”

Round 2 of the 2017 ROTAX Max Euro Challenge on the RGMMC calendar takes place at the world-renowned Sologne Karting International Circuit of Salbris in France from May 24-28.