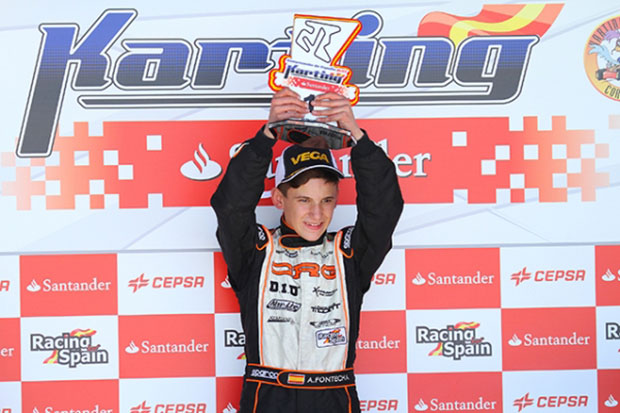 The Spanish driver of CRG Ayrton Fontecha won Junior’s Race-2 at the opener of the Spanish Championship. Strong performances for Prosperi, Cebrian and Sousa in KZ2. Satisfaction also in the other categories on track in Recas too.

The Spanish Championship kicked off at the Circuit of Recas (Spain, Toledo) with a great participation. CRG obtained very good results since the beginning and the icing on the cake was the one-two in Junior taken by the winner Ayrton Fontecha and the runner up Javier Sagrera.

Ayrton Fontecha turned out to be the main protagonist of Junior, the category pushed by X30 Iame engines, and posted the second quickest time in qualifying before keeping his momentum winning two heats. CRG works driver among the fields of Motor Club Deportivo Creixel Fontecha got on the second step of the podium in Recas’ Race-1, before claiming the victory in Race-2. In this latter case he was followed by Javier Sagrera, also on CRG run by M2 Racing Karts, who completed a good recovery run from the 13th place of Race-1. José Antonio Gomez was also among the quickest of Junior on CRG, as he ended Race-1 in eighth place and Race-2 in sixth. The other CRG driver Federico Alfonso Peters put in a remarkable recovery in Race-2 ending 11th.

CRG was also close to the podium in KZ2 with the Spanish drivers Enrico Prosperi, who was fourth in Race-1, and Gerard Cebrian fourth in Race-2. Cebrian proceeded Prosperi and the Portuguese Yohan Azedo Sousa at the flag of the second race. The French driver Brice de Gaye was second in both finals of KZ2 Silver instead.