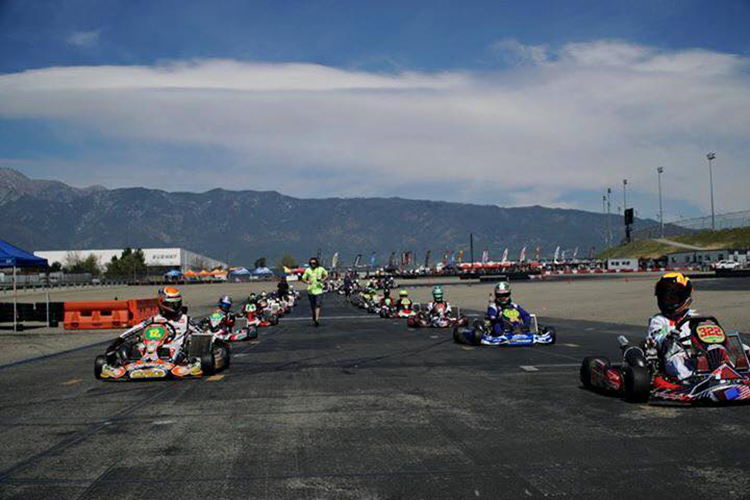 Los Angeles Karting Championship took on the Technico circuit at the CalSpeed Karting Center for the second round of 2017 (Photo: lakc.org)

On March 18-19, the Los Angeles Karting Championship continued its 2017 program, hosting the second round at the CalSpeed Karting Center in Fontana, California. Great weather welcomed the 191 entries in 22 divisions, taking on the ‘Technico’ layout in the counter-clockwise direction. A number of new winners highlighted the day which saw a 26% increase in entries over the opening round in February.

The largest category of the weekend was once again the Acceleration Kart Racing Mini Swift class. A total of 23 drivers took to the CalSpeed circuit with the Morgan brothers leading the way throughout the day. Cole Morgan started out as the driver to beat, securing the fast time in qualifying with a 45.688-second lap. Younger brother Carson clocked in second, and got the jump on Cole to begin the Prefinal. Carson led all 10 laps for the race win with Cole trailing, holding off Jonathan Portz. In the Final, Carson remained at the front, leading wire-to-wire for his first victory of the season. Cole had a fight early on with Portz and Rylee Martinez, securing the runner-up spot for a Morgan 1-2 finish. Portz took the third step of the podium over Martinez while Frankie Mossman won the battle for fifth.

The Tru Tech Racing Engines Micro Swift followed them up on course, increasing to 17 drivers for Round Two and welcoming a second driver to the top of the podium in Logan Toke, making his LAKC 2017 debut. Enzo Deligny set the pace to begin the day with fast time in qualifying, edging out Austin Manka by 36 thousandths of a second. Toke qualified third, and worked his way to the point in the Prefinal, earning the race win ahead of Manka. At the start, Manka was shuffled back while Toke jumped out to the lead. He never relinquished the top spot, leading all 18 laps for the victory. The battle for second brought in new drivers late, with Dane Idelson securing the spot over Deligny. AJ Zarcone pushed Manka back to the fifth spot overall.

It was an increase in numbers for the Musgrave Racing Company S3 Novice Stock Honda division, climbing up to 15 drivers for Round Two and also welcoming a new race winner. Keawn Tandon made his first start at LAKC one to remember, securing the victory in the main event. Tandon set fast time in qualifying but it was Prescott Campbell leading at the checkered flag in the Prefinal. The start of the Final saw Tandon fall a number of spots with Campbell leading the way. By lap seven, Tandon reclaimed the spots he lost and took over the lead when Prescott retired early. That gave Tandon the clean path to the top of the podium. Joining him was Evan Jonker and Anthony Fontana with Tyler DeGraff and Zoli Sule rounding out the top-five.

One category did see a repeat winner with Kalvin Chen adding another win in the PKS Kart Supplies S4 Super Master Stock Honda division. Chen found himself classified fifth after qualifying with Round One runner-up Warren Kindberg posting fast time, just nipping Sean Bond by five hundredths of a second. Bond was able to reach the checkered flag first in the Prefinal ahead of Kindberg, who was removed from the results and thus elevated Chen to the second spot. Bond led early in the main event, with Chen out front for most of the middle portion of the race. The two went back and forth in the final laps, with Chen able to secure the lead and the victory on the final lap. Bond settled for second as Jonathon Allen joined them on the podium. Chris Curtis was fourth with Kindberg advancing up to fifth.

The Motorsport Development Group X30 Intermediate division was a toss-up all day. Michel Manning started off first, claiming the top spot in qualifying. The top four, including Brenden Delorto, Aaron Heathman and Brendon Cramer, all recorded a lap time within 78 thousandths of a second. Delorto set the pace in the Prefinal, taking over the lead on lap two from Manning to score the win. He and Heathman went back and forth for the lead in the Final until Cramer put himself into the lead on lap 13. Cramer led the remaining laps to score his first victory of 2017. Delorto was second with Manning up to third. Heathman held on for fourth ahead of Jonathan Silva.

New for the 2017 LAKC program is the introduction of three Briggs & Stratton categories. The Mack Motorsports 206 Senior class grew to 12 drivers for Round Two, with the same result of Henry Morse earning the checkered flag. Morse swept the action, leading from qualifying to the final lap of the main event. After leading all 10 laps of the Prefinal, Morse was shuffled back in the main with Emon Fazlollahi leading. That was until lap nine when he retired, handing the top spot over to Alyssa Yauney. She led for three circuits before Morse took back the lead, showing the way the rest of the 16-lap run. Jake Hood came just 77 thousandths short at the line from stealing the victory. Yauney completed the podium with veteran Matt Johnson and Jonathan Kimbrell placing fourth and fifth.

For a second straight LAKC event, Robert Heck Jr. notched the victory in the Top Kart West S2 Semi-Pro Stock Honda class. Heck edged out Royal McKee for the fast time in qualifying, however, slipped back at the start of the Prefinal. That allowed McKee to take control, going on to score the race win. Heck bounced back in the Final, grabbing the holeshot over McKee to lead all 18 laps of the main event for a second straight victory. McKee finished second, just ahead of Gianfranco Casadei. Garrett McKelvie drove to fourth ahead of Brad Dunford.

Two drivers battled for the victory in the TM Racing USA 125 Open shifter class. Round One winner Slava Prikhodko and Tyler Coffman went back and forth all day. Prikhodko took the honors in qualifying before Coffman scored the win in the Prefinal. The holeshot went to Prikhodko with Coffman in tow, until he retired on lap nine. That gave Slava an easy path to his second straight victory. Willy Axton and Brennon Viera rounded out the podium.

Carson Morgan was en route to a second victory on the day as the top contender in the Fleming Racing Engines Junior 1 Comer division. Morgan scored the fast time in qualifying and won the Prefinal. While leading the Final, Morgan spun and lost a lot of time. This put Kasey Gillis into the lead, going on to score the victory. Troy Hageman finished second with Morgan fighting back to end up third.

The 2 Wild Karting X30 Pro main event was not how the experienced group of drivers should handle a race, with two incidents requiring an ambulance run for each. When the checkered flag finally waved, Cody Kelleher was the driver earning the victory. Kelleher took the lead on lap two from top qualifier and Prefinal winner Aidan Yoder, showing the way the rest of the Final for the top spot on the podium. Colby DuBato won the second spot in a heated battle, edging out Worawong Komarakul with Jesse Gutierrez and Anthony Sawyer rounding out the top-five. Dylan Palatin was injured in one of the incidents, and the LAKC family would like to wish him a speedy recovery.

Due to the ambulances leaving after the X30 Pro main event, LAKC officials discussed two options with the drivers/mechanics for the X30 Junior Expert and X30 Junior Novice divisions to close out the day. One was to wait for an ambulance to return or to take the heat race results as their main event finishes. The majority of the drivers chose to not wait, and the LAKC officials cancelled the main event, thus promoting the Prefinal results as the Final results. That put Joseph Daniele on top of the Ryan Perry Motorsport X30 Junior Expert podium with Jacob Hudson and Colin Queen joining him. In the Baldozier Racing X30 Junior Novice class, Jacob Yesnick was classified as the winner with Lanie Benjamin and Bentley Adams completing the podium.

Following the event, Los Angeles Karting Championship announced MotorsportsReg credit, totaling over $1,600, toward future LAKC events to those in the two Junior categories. Officials are looking into how to avoid a similar situation in the future.