CRG Protagonist in All Categories of the Andrea Margutti Trophy 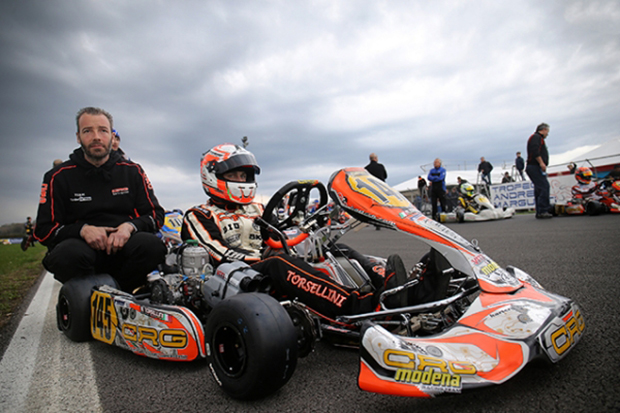 Crescendo of performance in Lonato for CRG drivers. Bradshaw secured his maiden victory in OK. Great race for Alessandro Giardelli in KZ2, Federer dominated but ended second in the Final. Henrion close to the podium in OK-Junior, great debut for Luca Giardelli. Spina triumphant in 60 Mini.

A series of important confirmations arrived for CRG works team at the 28th Andrea Margutti Trophy, race run in the weekend of March 26th at the South Garda Karting circuit of Lonato. Several protagonists came to the fore, especially youngsters like Callum Bradshaw who claimed his maiden victory in OK, the category in which he made his debut this year.

Confirmations sought and found by CRG in Lonato at the 28th Andrea Margutti Trophy went far beyond this. Alessandro Giardelli put in a good performance in his debut race in the professional category KZ2 after competing in OK-Junior last year. Giardelli’s apprenticeship has been quite short, as shown in the recent WSK Super Master Series in La Conca. The CRG driver took the luxury of posting the fifth quickest time of his session in qualifying this time around, a lap that was worth the ninth absolute performance ahead of some more experienced drivers. Giardelli kept his momentum in qualifying heats with a splendid seventh place and a recovery from P17 of the Prefinal to P10 in the Final. That was a really bold performance.

Sweet notes for CRG came also from OK-Junior, as Luca Giardelli – the younger brother of Alessandro not yet 12yrs old, made his debut in 60 Mini. Despite this being his first experience,  Luca Giardelli run a solid weekend finding his place among the finalists and ending the Final in P18.

Another display of good competitiveness came from 60 Mini, thanks to the clever racing of team CRG Gamoto’s Alfio Spina. He managed to take all his rivals in the sprint to the line clinching an exciting and splendid victory.

CRG got on the KZ2 podium with the two time European Champion Fabian Federer, on CRG-Tm run by team SRP Racing, who dominated most of the weekend from heats to Prefinal. In the Final Federer had to concede the position to Riccardo Longhi’s comeback, but managed to secure a great P2. Mirko Torsellini also run a great race on CRG-Tm run by Team Modena Kart, but was hit by bad luck in one heat when he had a problem to the drive chain. He was therefore forced to get some ground back in Prefinal and Final. In the end, he took the seventh place posting the second quickest time of the race in  46.058s, which was the fastest of CRG drivers. Fabrizio Rosati also closed his effort within the top ten in P9 on team SRP Racing’s CRG-Tm, while Alessandro Giardelli ended the final in his slipstream. Marco Valenti could not find his place among the finalists despite a positive performance, as he had retire from the second chance race and from one heat.

BRADSHAW BACK TO THE VICTORY IN OK

Callum Bradshaw put in a winning performance in OK, confirming the success of the CRG-Parilla package that won the World and European Championships in 2016. Bradshaw’s victory was completed by the great performance of the German Hannes Janker, who was sixth in the Final and by that of Dennis Hauger.  A penalty due to the mispositioned front fairing relegated the Norwegian to the 12th place at the end of a great comeback that saw him crossing the finish line in fourth. That was a pity. A similar fate hit Michael Rosina, who ended 18th. Henkie Waldschmidt was back to karting after a motorsport career that saw him becoming Toyota works driver. In the occasion he run a very positive weekend with a crescendo of results. A technical problem in the Final unfortunately stopped him when holding P8.

HENRION CLOSE TO THE PODIUM IN OK-JUNIOR

The French Gillian Henrion was the best of CRG lot of OK-Junior. He was fourth in the Final and among the quickest on track, as witnessed by the second place close to the leader that he held during the race. Among the quickest of CRG drivers, the German Luca Maisch of CRG TB Racing Team was seventh, the Spanish Javier Sagrera 12th and Luca Giardelli 18th in his debut race. The Brazilian Gabriel Bortoleto was among the front runners, but a 10s time penalty stripped him from a satisfying sixth place and pushed him down to P19. The French Evann Mallet had to retire instead.

Alongside the triumph of team CRG Gamoto’s Alfio Spina, a good race in 60 Mini was completed by team TB Kart’s Leonardo Bertini Colla, who ended sixth leading Filippo Croccolino of Team PC Driver Project. Very positive race also for the other two CRG Gamoto drivers: the Spaniard Tommy Pintos was tenth in the Final and Miron Pingasov 12th after the sixth place of Prefinal.